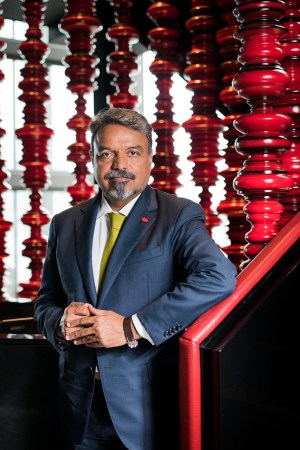 While the Chinese government’s devaluation of the yuan this week is sending shockwaves through the worlds of finance and retail, Ravi Thakran, managing partner of L Capital Asia said he is not worried about negative fallout from the development.

Thakran said he sees “zero” impact on Chinese luxury consumers from the devaluation. It is business as usual for the LVMH Moët Hennessy Louis Vuitton-backed fund, which is pushing ahead with its acquisitions drive — the executive said the fund hopes to announce a deal in the men’s wear sphere in the next few months. Thakran said the fund is also keen on Asian beauty brands and snapping up stakes in more Australian labels.

He stressed the importance of interpreting the devaluation news within the proper context — over the past couple of days the yuan has shed about 3 percent of its value but that is a minor drop considering that the currency has gained about 30 percent against the dollar and other currencies over the past three years. And if anything, the move will boost Chinese exports and thus the economy at large, which will be a benefit to consumers, he reasoned.

“It’s an incremental correction…there’s still a huge advantage for them to travel abroad and buy as they’ve been buying earlier,” said the executive, who is in Hong Kong for the opening of the first international branch of Singaporean restaurant and club Cé La Vi, one of the fund’s investments. “I would say to everyone not to have a knee jerk reaction to these kinds of incremental moves.”

Thakran said China has a big advantage to most other countries in that it has a very strong balance sheet.

“When you have $4 trillion plus reserves, your capacity to take corrections is far, far higher as against Western markets, all deficit markets. This is one big positive for them,” he said.

Thakran downplayed concerns about an overall slowdown in the Chinese economy. Again, he said any corrections need to be considered in the proper context. China is now at a “more sustainable growth” and companies can take advantage of the dip in the market to negotiate better deals on rent and M&A activity.

“The growth of the Chinese economy is still larger than the [size of the] whole economy in the late Eighties,” he said. “Which economy in the West is growing anywhere near five percent? None,” he said, adding that Chinese consumers are anxious to travel and elevate their lifestyles and are still growing as a percentage of total luxury consumers, now accounting for about a quarter of the total market.

“I guarantee you in four to five years, it’ll be a global brand,” he said, explaining that L Capital’s luxury expertise can help brands develop themselves in areas like marketing, store concepts and advertising to become high-caliber players with global scale.

Restaurants and hospitality continue to be a focus for L Capital as well. The new Hong Kong branch of Cé La Vi, located on the 25th floor of the California Tower in the entertainment district of Lan Kwai Fong, offers a luxe take on modern Asian dining. Thakran said L Capital has already secured new locations for the restaurant in Dubai, Taipei and Bangkok and it hopes to one day open branches in Tokyo and Seoul, making it an international franchise.

“I would like [that] when people come to these cities, that the number one location for classy dining, classing entertainment are not western concepts but Asian concepts,” he said.