The jeans maker turned in continued gains in the first quarter and stood by its guidance for the full year, projecting a double-digit revenue increase even as it operates in an increasingly complex world.

So much has changed in the nearly three months since Levi’s set its 2022 target — the war in Ukraine has shaken the geopolitical scene, inflation has proven to be longer lasting than many had hoped and more.

Chip Bergh, president and chief executive officer, is aware of the risks — and watching them closely — but told WWD in an interview that the company has what it needs to hit its numbers

“I don’t want to sound like we’ve got our heads in the sand,” Bergh said. “We read all the same headlines, the same Jamie Dimon letters as everyone else.” (Dimon, who is CEO at J.P. Morgan Chase, recently warned about the impact of the hostilities in Ukraine and the resulting sanctions on Russia, noting: “​They have roiled global oil, commodity and agricultural markets” and are expected to cut euro area GDP growth to 2 percent this year instead of the 4.5 percent pace seen just six weeks ago).

But Bergh said his brands, including Levi’s, Dockers and the newly acquired Beyond Yoga, are all “in a very healthy place. We have taken pricing and that pricing is sticking and, despite that, we grew both volume and revenue this past quarter.”

Revenues for the three months ended Feb. 27 rose 21.9 percent to $1.6 billion from $1.3 billion. Supply chain constraints cut the top line by about $60 million while the strong dollar and currency conversions shaved off another $38 million.

The company’s direct-to-consumer revenues rose by 35 percent with contributions from both stores and e-commerce operations. Global digital revenues grew by about 16 percent and made up a quarter of the total business.

“We’re starting our fiscal 2022 with lots of momentum and fundamentally, what this comes down to is our strategies are working…and our brands are strong,” Bergh said.

And while the company’s focus on brand, its more scientific and data-based approach to pricing and its retooling during the pandemic are paying dividends, the CEO said the consumer is also holding strong.

“We look at the state of the U.S. consumer and we feel very good about their current state,” Bergh said. “There’s a lot of noise about inflation, the risk of a recession. But March consumer confidence is up from January and February. Job growth is really strong, basically back to prepandemic levels. If you want a job, you can get a job today. Family balance sheets are in a really good place. There was also a lot of pent-up savings during the pandemic and consumers are only now just starting to tap into those reserves.” 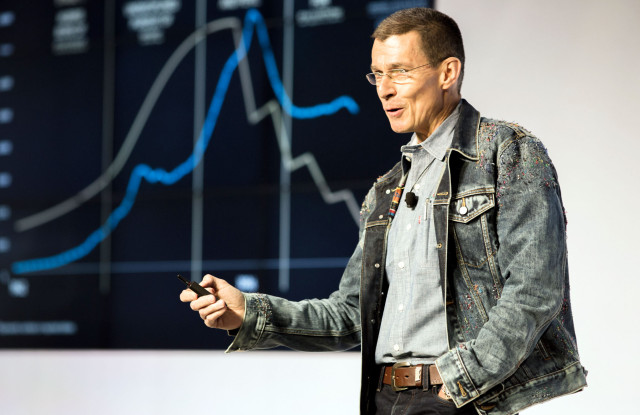 So it’s a kind of watchful charge ahead at Levi Strauss, which Bergh said has the branding might to endure even if the consumer environment does get worse.

“At the end of the day, the Levi’s brands, even with the price increases we’ve taken, it represents a really good value,” he said. “You can buy a Levi’s trucker jacket and 25 years from now you’re going to be passing it down to your grandchildren.”

Now the company has another brand to build on, having acquired Beyond Yoga last year.

“It’s a gem of a brand that I believe has enormous runway for growth,” Bergh said. “What we’ve learned is its brand awareness, not surprising, is very, very low. But of those who are aware and have bought Beyond Yoga, there is intense loyalty.”

The project now is to grow that brand awareness and build the business, including through brick-and-mortar stores.

That gives the company another lever to pull.

Levi’s has also been gaining at wholesale, where revenues increased by 15 percent in the quarter.

Part of that comes from Target, which is expanding with Levi’s moving the brand’s Red Tab looks into 800 doors, up from 500.

Is This As Good As It Gets for the Consumer Economy?

Rihanna Is Getting a Wall Street Education With IPO Prep

Farfetch and Neiman Marcus Teaming Up to Take on U.S. Luxury