Powered in part by sales of its Rasta accessories and modernist men’s wear, Christian Dior’s operating profits soared 37 percent in the first half. 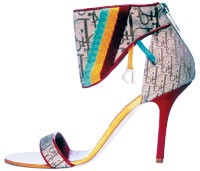 The results, less than a week after LVMH Moët Hennessy Louis Vuitton posted a 49 percent jump in net income, underscore how one of Bernard Arnault’s most treasured fashion properties is fast becoming another cash cow among his vast constellation of luxury holdings.

Indeed, Dior president Sidney Toledano confirmed the fashion house is on track to reach 1 billion euros, or $1.22 billion at current exchange, in volume by 2007 — and with profitability in excess of 20 percent. (Dior’s beauty business has already surpassed the 1 billion euro threshold.)

“This is exactly in line with the plan. The momentum of the brand is really strong worldwide,” Toledano said in an interview Monday at Dior’s gray and white headquarters here. “For the full year, we confirm a significant improvement in the profitability.”

Christian Dior S.A., the holding company that includes LVMH and Christian Dior Couture, did not quantify the Dior profits; it provides that figure only annually. In 2003, operating profits zoomed 21 percent to 40.1 million euros, or $48.9 million, as reported. Dollar figures for the first-half results are at average exchange.

Sales in the six months ended June 30 increased 16 percent to 274 million euros, or $334.3 million, a 20 percent rise at constant exchange rates, as reported.

“In July and August, the trend was also very good, in Asia and the U.S., and Japan was very good as well,” Toledano said, noting that sales in the U.S. are up 43 percent year-to-date in dollars.

On the women’s side, Toledano cited “excellent” performance of designs by John Galliano, in particular his Rasta line of bags and shoes, edged in red, gold and green.

A bowling-shaped bag with dice hardware called the Gambler has also been taking off since deliveries began last month. “On Saturday, we were out of stock on the best styles,” Toledano said. “We have a waiting list.”

In addition, Toledano highlighted rapid development of Dior Homme by Hedi Slimane, with all categories of products — from suits to accessories — selling briskly at retail this fall. In fact, Dior quietly phased out its more traditional men’s wear range this season in favor of Slimane’s lean-and-clean aesthetic.

Toledano cited strong consumer reaction to a range of high-end “colognes” Slimane developed for sale in select Dior boutiques, and hinted a wider rollout may be forthcoming.

Looking ahead to the critical second half, Toledano said store openings and product initiatives will drive sales. Dior has already opened more than a dozen locations this year — including Prague, Houston, Taipei and Waikiki — to bring its current store count to 172. In the coming months, units are slated to bow in Dubai, Macau, Hangzhou in China and Tokyo’s Ginza district.

On the product front, initiatives for the second half include a Slimane-designed men’s watch and a special range of jackets by Galliano backed by an advertising campaign featuring Riley Keough, the daughter of Lisa Marie Presley and thus Elvis’ granddaughter.