Closing In on a Merger: Federated, May Co. Talks Intensify Over Final Price

Federated Stores, amid speculation that a resolution was near in merger talks with May Co., reported strong fourth-quarter and year-end results. 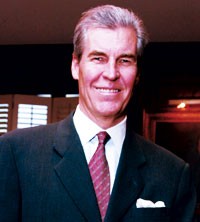 NEW YORK — The Federated-May merger talks are at full boil and a deal could happen as early as next week.

As the two department stores battle over the final price, sources said Tuesday that Federated could be arranging a sell-off of its, or May’s, credit operation, May divisions and individual stores to others, such as J.C. Penney and, to a lesser degree, Nordstrom and Saks Inc. That would raise money to finance the merger, help avoid government antitrust concerns, and reduce store overlaps. Sources see most of this occurring in the Northeast and West, with Federated most anxious to retain May properties in the Midwest and Texas, notably Marshall Field’s and Foley’s.

One financial source noted that if an announcement doesn’t occur by early next week, it’s an indicator that the parties can’t agree on price, given that negotiations have been going on for several weeks.

The only apparent question now is the final cost to Federated — whether it will be $11 billion or $13 billion, or somewhere in between.

Stacy Turnof, analyst at Merrill Lynch, observed in a research note, “Our analysis indicates that the deal could be worth between $36 and $43 per share. We believe that price is the key issue rather than the Federal Trade Commission at this point, and that there is a strong likelihood that the deal could transpire over the next several days.”

On Tuesday, May’s stock closed at 33.62, up 17 cents, and saw heavy trading on the New York Stock Exchange.

Federated’s stock closed at 55.29, down $1.43. The decline came despite the retailer releasing fourth quarter and 2004 results that were impressive in light of a challenging and late Christmas season and consolidation efforts involving Macy’s and Federated’s home business.

The fourth-quarter results beat Wall Street’s estimates by one cent, with the upside surprise partially boosted by a small decline in the expense ratio.

“When you consider all of the change that we absorbed in 2004 which we believe will bear fruit in fall 2005 and beyond, and that we came in at the high end of our earnings guidance, we feel good about the year,” Terry Lundgren, Federated’s chairman, chief executive and president, told WWD.

Lundgren wouldn’t comment on the May speculation, but if a deal is completed it would have two major impacts. First, the Federated chairman will become the most powerful force in American department store retailing and, second, the merger will send a shudder through those vendors supplying both May and Federated.

In reporting fourth-quarter and year-end results Tuesday, Lundgren and other officials cited several strategies to lift sales and store traffic. Among them:

In addition, a decision by the second quarter on whether to sell off the credit operation is expected, which could help fund an acquisition of May or another retailer.

For fiscal 2005, Federated said same-store sales are expected to rise by 2 percent, with comps rising in the first half by 1 percent, following a strong spring 2004 with 5 percent comps. Comps in the second half of 2005 are seen rising 3 percent.

Federated’s fourth quarter comp sales weren’t the best, at 0.8 percent, and for 2004 came in at 2.6 percent. “Keep in mind that most stores that are producing high comp-store sales increases are substantially smaller companies,” Lundgren advised.

But he singled out Federated’s $2 billion Bloomingdale’s division for “a very good performance.” Reportedly, Bloomingdale’s produced a high single digit comp-store gain for the year, around 8 percent.

For the past three years, Bloomingdale’s has been executing a brand strategy involving improved environments, with wider aisles and less clutter, assortments that are more focused on contemporary product, and reduced promotions.

“The question we are asked often is, ‘Will we roll out the SoHo model?’ It’s an opportunity, but we have not made a firm decision,” Lundgren said. “We do believe that is a possibility for us. We are getting offers every week from real-estate developers. Because the size is just under 100,000 square feet, it opens the door for new opportunities not previously considered,” including lifestyle centers, malls and urban environments, Lundgren said. Bloomingdale’s SoHo opened last April.

“This is a very competitive and very challenging business. But we continue to push ourselves to break away from the pack. That is hard to do, but not impossible. We have said that when we deliver comparable store sales [increases] of 2 to 3 percent, we can continually grow our earnings. We have a model that will continue to grow our earnings and provide a very satisfactory return to our shareholders. But we are hungry for more than that, though we need to be realistic about that. There are so many types of retail out there that the driver of comp store sales is going to be unique product. Our focus and attention is on that very subject. We have to work to find unique, fashionable product, and I would throw in affordable luxury. Those looking just for the cheapest possible pair of shoes they can buy are not our core customer. Our core customer is someone seeking what’s new, what’s fashionable and still affordable. They’re seeking one of those little luxuries that make them feel unique and special. Coach is affordable luxury. Ralph Lauren is affordable luxury. Kenneth Cole is, too. I do believe that status, better brands will continue to grow as a percent of the [Federated] total.”

With private brands, too, Lundgren said, “I believe there is more opportunity in the higher end of our business.

“We had another very good year with private brands. They continue to outpace the market brands. It’s now 17.5 percent of our business, right on pace of where we want it to be, and again I believe it’s growing. We treat these private brands like the market treats their brands. We give them good space, quality presentations and adequate selling assistance, and the quality of the product is considered high.

“We are finding that the future growth for us in private brand will come from more upscale private brands, such as our Hotel collection of textiles, and Tasso Elba, our men’s tailored clothing and sportswear collection with beautiful Italian fabrics. The product is selling well. It’s very high quality and the price point is not being resisted.

“I have always said that for us private brands could easily reach 20 percent of our total, and keep in mind, we don’t have it in cosmetics, furniture and a number of other businesses.” That means that, in categories where private label is prevalent, the percent in some cases exceeds 20 percent.

Karen Hoguet, the chief financial officer, said in a conference call that over one-third of Macy’s assortments are exclusive, meaning sold only at Federated stores, or one other department store. She also said that the average unit sold was up 6 percent in price in 2004.

She described Bloomingdale’s as experiencing “another terrific year as this division continues to take the business more upscale.” Selling higher price points could offset some apparel deflation and reduced mall traffic.”

“To be the absolute best of class, that is the short-term goal. The longer term goal is when [consumers] think of the American department store, they have to think of Macy’s,” Lundgren said.

In its outlook for 2005, Federated provided annual diluted earnings per share guidance in the range of $4.55 to $4.65, with the first quarter expected at between 45 cents to 50 cents, and between 80 cents and 85 cents for the second quarter.

A takeaway from the Federated conference call with Wall Street for Augustine was the confidence of management. “This team is estimating a 1 percent comps gain for the first half on top of last year’s 5 percent increase over the prior year. It was not that long ago that a lot of department stores were doing negative [comps] on top of negative [comps]. The underlying business trends are strengthening and for Federated, this suggests that the team is executing very well on their strategies,” she said.

Robert Buchanan, analyst at A.G. Edwards & Sons Inc., pointed out in a research note that Federated, which he calls the “best-run U.S. department store,” exceeding the same-store industry average for six straight quarters.

But he cautioned: “Our hope is that Federated management doesn’t make the mistake of overpaying for lagging rival May Department Stores, whose stock at its current price already represents a valuation of 100 percent of sales (assuming that May’s $2.3 billion credit card portfolio is worth book value).”

As for the Federated’s credit card business, Hoguet said on the call that a decision was more likely to be resolved during the second quarter. “This is a very important business for us, and we are very carefully evaluating our options, including the possibility of maintaining the status quo. It is in all of our interests for us to take our time and make a good decision here,” she said.

One analyst, who requested anonymity, said a decision on the credit business was tied in with the potential merger with May. The expectation among several analysts was that if the agreed-upon price hit the $40-a-share range, both Federated’s and May’s credit card business operations would be sold to help finance the merger transaction. On the other hand, if the price was lower, Federated could get some flexibility in keeping its credit card business while selling May’s.

With the credit business, “We are evaluating our options including the possibility of maintaining the status quo. We hope to have this resolved sometime during the second quarter,” Hoguet said.

On cash flow, Hoguet said it was better than expected since inventory came in below plan, some payables were better, and capital expenditures were a little below the anticipated $500 million. She said she sees room to further improve inventories, particularly with replenishing and editing basics.