Coach Still on a Roll:As Profits Leap 60%, Big Expansion Ahead

Coach’s first-quarter sales jumped 33 percent, earnings rose 60 percent, its store count is set to add 100 units and it will remodel its flagship. 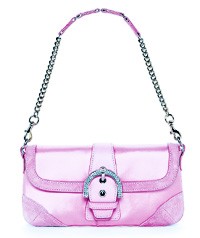 NEW YORK — Coach is painting its accessible luxury on a broader canvas.

As the company reported a 60 percent leap in first-quarter earnings and a 33.2 percent rise in revenues, it said it was looking to add 100 stores over the next few years, remodel its New York flagship and introduce a higher-priced special collection for holiday retailing.

Summing up how the surge in luxury spending has benefited Coach Inc., Lew Frankfort, chief executive officer of the company, said in a conference call, “During the last several years, we established a lane between the moderate segment and the luxury accessory brands which we termed ‘accessible luxury.’”

He cited strong sales of handbags and women’s small leather goods in the quarter, adding that Coach’s U.S. branded women’s accessories business is still “experiencing an unprecedented level of growth this year.”

The company Tuesday also forecast both second-quarter and full-year earnings ahead of analysts’ estimates and detailed new store and holiday product expansion strategies. Plans include a 2,000-square-foot expansion of Coach’s flagship at 57th Street and Madison Avenue in New York, the addition of 100 U.S. retail stores in the next four to five years and the Nov. 1 launch of its first lifestyle evening collection at prices 20 to 30 percent higher than its core concepts.

Tucci said the company has 10 concepts and items in place for holiday that he expects to make up roughly 50 percent of the Coach’s overall business in the second quarter. Holiday floor sets will be set up in stores on Nov. 22, and Tucci said there will be a front table change in all stores in mid-December to freshen stores and drive traffic.

Meanwhile, both domestic and international expansion remain a key focus for Coach, with five retail and five factory stores opened during the first quarter. In Japan, four stores were opened and six were expanded. At the end of the quarter, Coach’s total store count was 179 retail stores and 81 factory stores in the U.S., and 103 stores in Japan.

Coach plans to open at least six more U.S. retail stores before the holidays. In Japan, four retail stores will open, including what will be its first flagships in Osaka and Sendai.

Looking to fiscal 2005, Coach expects to add a total of 20 to 25 retail stores in the U.S. Some of the units will be in markets that the company feels can generate fuller price points. At least nine of the company’s most productive stores, such as Copley Square in Boston and South Coast Plaza in Southern California, also will be expanded in 2005 to add a total of 14,000 square feet, or more than 3 percent, to Coach’s total full-priced selling space, Frankfort said. Total capital expenditure in fiscal 2005 is seen at more than $85 million, Coach chief financial officer Michael Devine said on the call.

Regarding the remodeling of the flagship in New York, Frankfort said the location will close in January and will reopen in the summer as an 8,750-square-foot store. “The new design will restore the space to its original landmark heritage while providing a modern, classic store environment to enhance the brand and showcase our pinnacle product,” said Frankfort. “We’re increasing the first floor on 57th Street and we are increasing the second floor on both Madison and 57th Street.”

In Japan, at least 10 stores are slated to open in the next year. Roughly 15 of Coach’s most productive shops in Japan also will be expanded, which will add about 14,000 square feet, or 11 percent, to its retail base, Frankfort said. The expansion is expected to help sales in Japan increase by at least 25 percent in the calendar year to $355 million.

Coach sees second-quarter earnings of 64 cents on sales of at least $505 million. Analysts are expecting earnings of 62 cents with sales of $506 million. The company earned 50 cents in the year-ago second quarter.

Coach outlined 10 key concepts and items for the holiday season. Collectively they are expected to represent about 50 percent of business in the second quarter.