Smaller brands and start-ups are circling in, trying to take market share as the lingerie giant puts its comeback strategy in motion.

The Angels might not be enough to protect Victoria’s Secret.

But where scantily clad divinity fails, the economics of being the market leader might buy the brand enough time to turn things around.

Victoria’s Secret’s share of the U.S. intimates market fell to 24 percent last year from 32 percent just three years earlier, according to Euromonitor International. Despite the steep decline, that’s still has a big lead over the company’s nearest rivals. The brand, it turns out, continues to maintain an outsized clout on social media and strong name recognition.

So far, Victoria’s Secret has not been able to use those advantages to full effect, but investors will get a fresh look at the brand’s progress on Wednesday, when parent company L Brands Inc. reports quarterly results after the market closes.

Whether Victoria’s Secret shows first-quarter signs of a turnaround, the company is on the move. Tory Burch alum John Mehas was hired last year to lead Victoria’s Secret, which has also shuttered stores, reintroduced swimwear online and said the famous fashion show might not return to network TV next year. L Brands, meanwhile, has been shedding unprofitable divisions, including Henri Bendel and La Senza, and fending off activist investors.

Smaller lingerie brands and buzzy start-ups have been circling in, highlighting their own inclusive approach or outright attacking the brand’s approach. But they might find they have awakened a sleeping giant.

“These handful of emerging companies are making a lot of noise and generating a lot of buzz, but they really haven’t made much of a dent in Victoria’s Secret’s sales,” said Simeon Siegel, retail analyst at Nomura Instinet. “The reality is that Victoria’s Secret is still selling billions of dollars worth of their core product.”

To be more precise, Victoria’s Secret sold $7.4 billion worth of bras and underwear in 2018.

But there are plenty of competitors coming for that market share.

“For all the handful of start-ups that generate tens of millions of incremental dollars, Aerie has the most opportunity to make bigger strides,” Siegel said.

In fact, Aerie, which is owned by parent company American Eagle Outfitters, was the biggest brand to gain market share in the women’s intimates category last year. In 2018, Aerie held 3 percent of the U.S. market, according to Euromonitor. 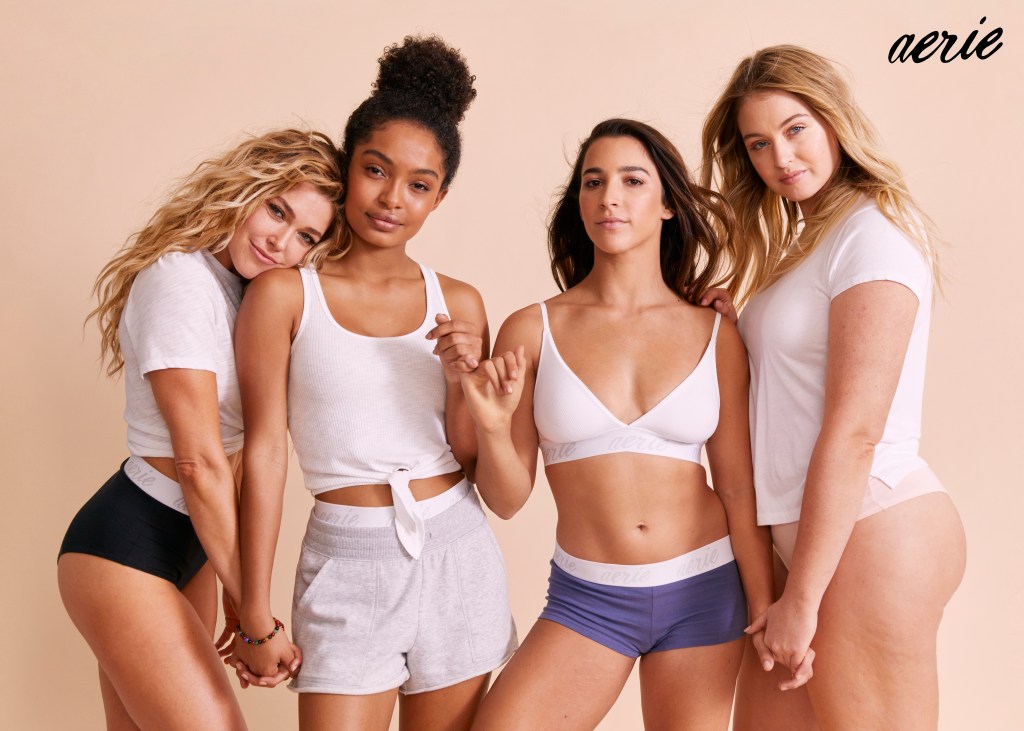 “These emerging brands are directly capitalizing on [Victoria’s Secret’s] weaknesses and therefore could continue to take share at an accelerating rate,” Oliver Chen, retail analyst at Cowen Outperform, wrote in a recent note.

On Instagram, Victoria’s Secret has more than 66 million followers. By comparison, Aerie has just 1.1 million on the platform, Adore Me has 426,000 and ThirdLove has 272,000 followers. The larger social media exposure means more people are likely to buy Victoria’s Secret’s products, simply because they’re aware of new products and styles as they’re released. 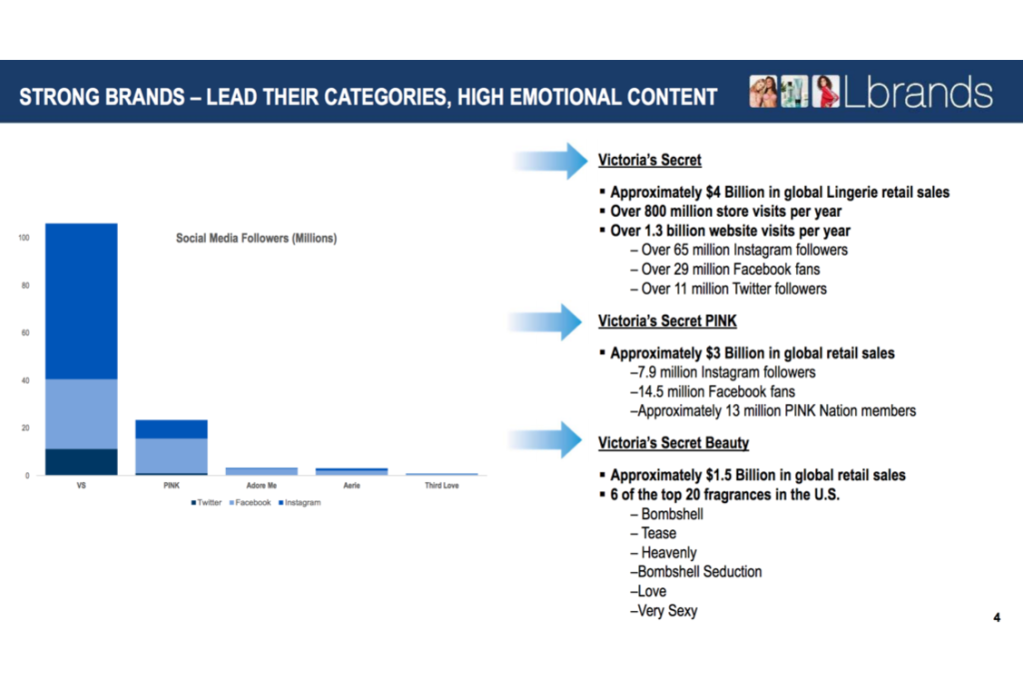 The large social media following also points to Victoria’s Secret’s ability to create desire — among both men and women — turning millions of women into wannabe Angels.

“One thing I learned working at Victoria’s Secret is the power of a brand,” said Michelle Cordeiro Grant, former senior merchant at Victoria’s Secret. In 2016, Grant founded direct-to-consumer lingerie brand Lively. “Victoria’s Secret’s brand is very cohesive and it’s really consistent around the Angels and the fantasy and the push-up.” 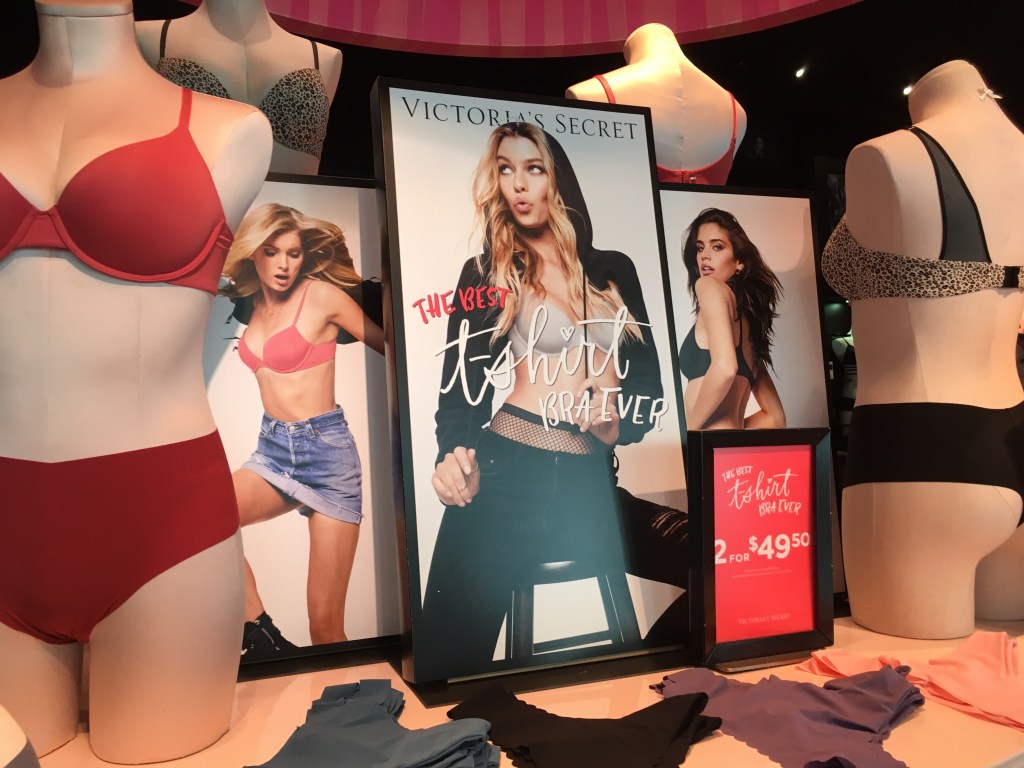 But even the Angels have flaws. Amid the #MeToo movement and an era of body positivity, many shoppers are seeking lingerie companies that showcase realistic versions of women.

Cowen recently surveyed about 180 consumers to find out what they think Victoria’s Secret stands for. More than half said “sexiness.” But among those same shoppers, 55 percent said comfort was the deciding factor when making purchases, versus 17 percent who cited sexiness as their primary concern.

“The legacy messaging is not resonating with customers,” Chen wrote. “[Victoria’s Secret] needs to shift both messaging and assortment toward prioritizing all body types and sizes. This is not a quick or easy fix.”

But the brand’s scale gives it some time to work on that fix.

“If you look at the trajectory of Victoria’s Secret’s decline, it hasn’t been that long,” said Heidi Zak, cofounder and chief executive officer of ThirdLove. “They were the darlings of the market, up until a few years ago. They were sort of the last big [lingerie company] to start to fall.” 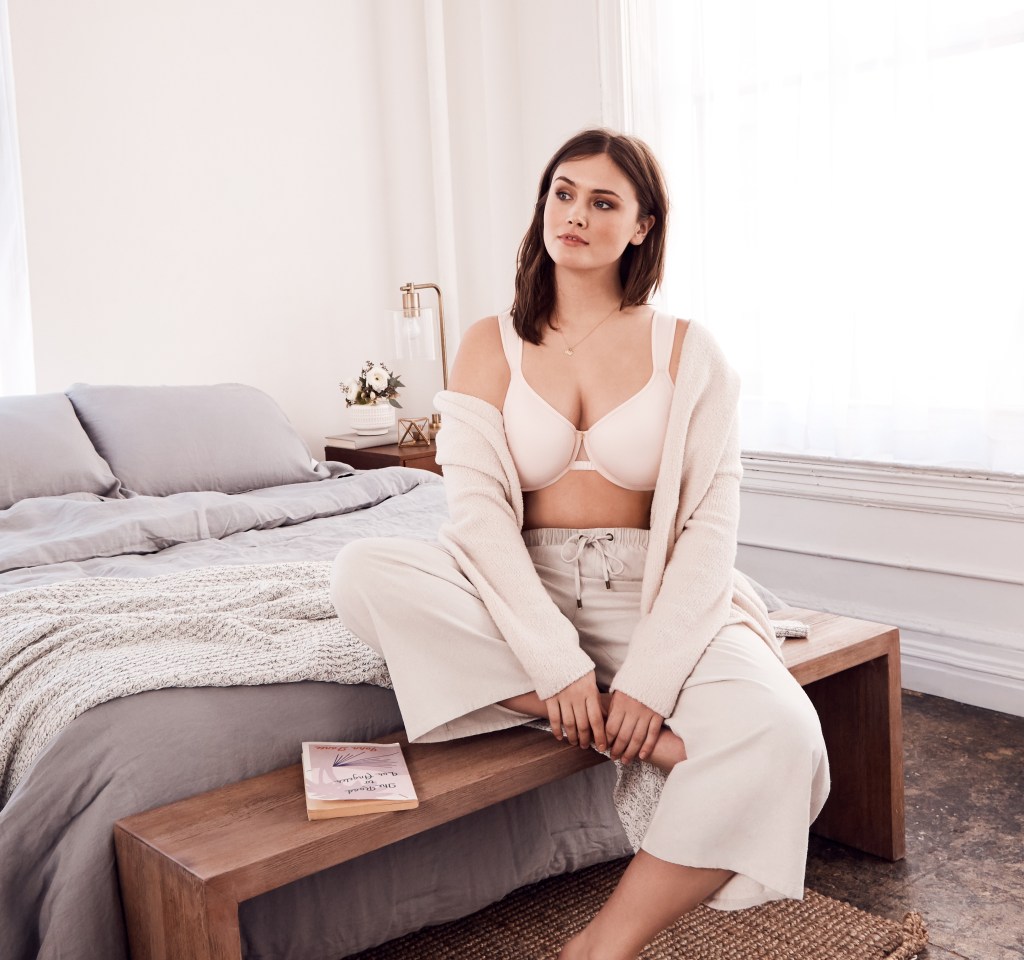 A look from ThirdLove.  Courtesy

Still, she said one thing Victoria’s Secret has not been able to do well is adapt with the changing woman.

That’s one of the reasons Zak started ThirdLove and Grant started Lively.

Aerie, one of the first and perhaps biggest companies to challenge the traditional concept of sexy, build its entire brand in contrast to Victoria’s Secret. AerieReal was the first lingerie campaign to use un-airbrushed models and encourage consumers to post photos of themselves on social media in Aerie products using the hashtag #AerieReal, sans filters.

“The customer really senses the authenticity of our campaign and what the true DNA is of our brand,” said Jen Foyle, Aerie global brand president.

“Trends change, but what I think can’t change is the power of your brand,” Foyle added. 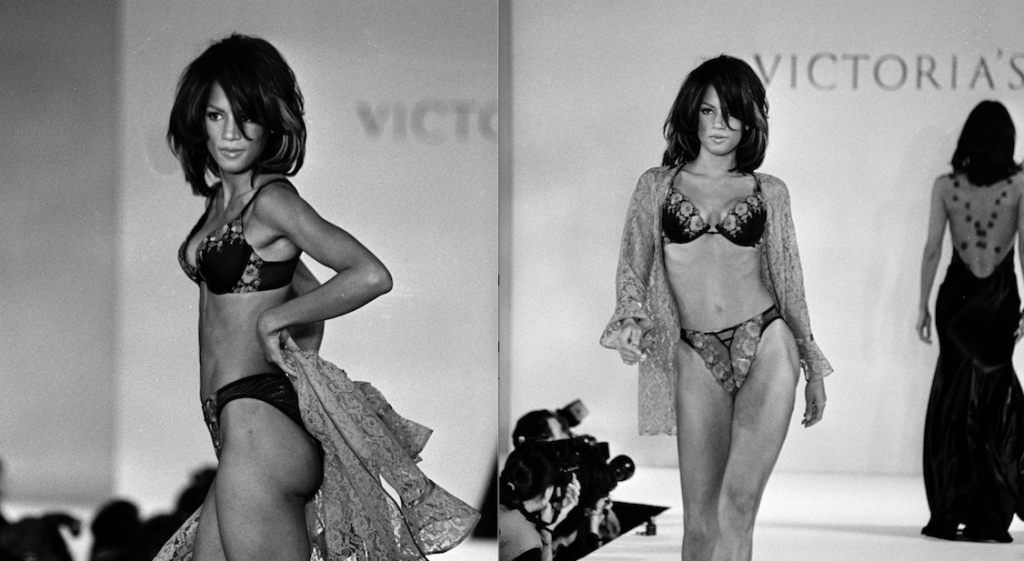 Veronica Webb, one of the original Victoria’s Secret’s Angels, walked in the company’s first fashion show in 1995.  WWD

Webb, who walked in the first Victoria’s Secret fashion show in 1995, is smitten with lingerie — everything from “granny panties” to sexy underthings — and said she shops across multiple brands to fit her mood. 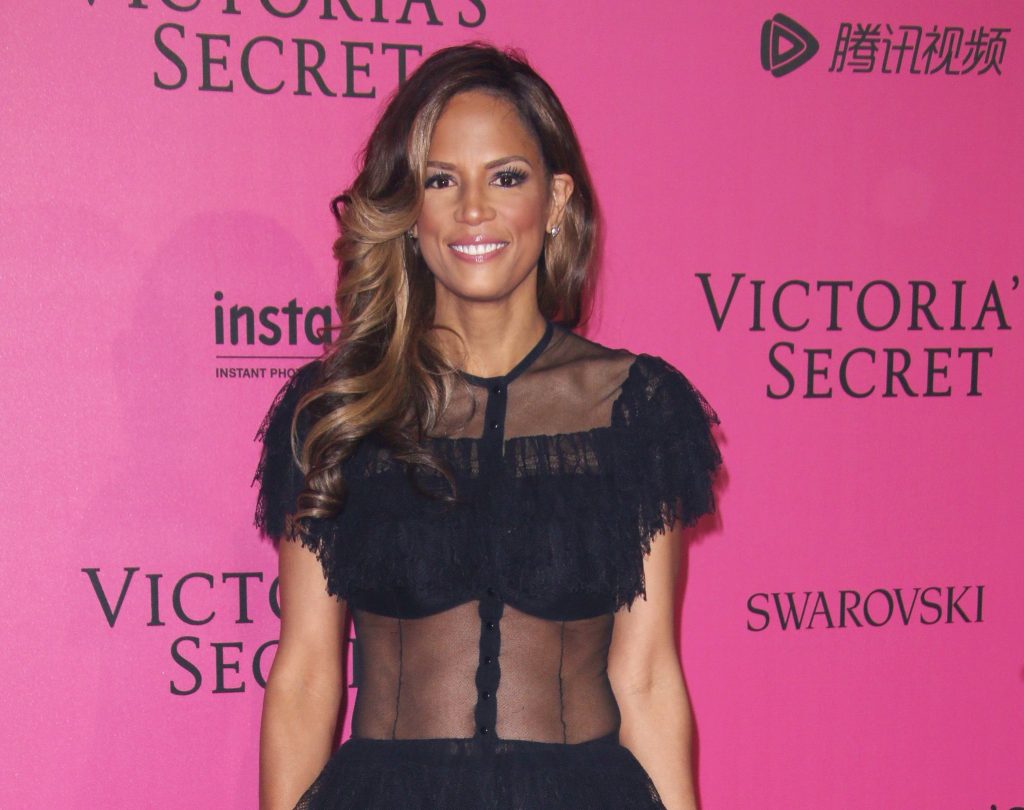 “It’s such a great part of getting dressed and feeling comfortable,” she said. “And bras are a big deal. There’s a lot of diversity in the lingerie market now. It’s nice that the field is a lot more open and a lot more accepting to different moods and different body types.

“But with a lot of these brands, we can’t really tell them who their customer is,” Webb said. “The hot-and-sexy Eighties and Nineties, that was certainly a really fun period. We’re in a period that’s a lot like how the late Sixties and early Seventies were, where a lot of different ideas of self-expression are opening up. And you’re going to see, the pendulum is going to swing the other way again in 10 years and we’re going to go back to a stricter, more narrow idea. I mean, that’s fashion. Fashion is like women; we change.”