The sector has seen a wave of real consolidation, with firms swept up under one roof to cut costs and to be more competitive. 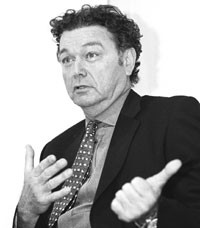 NEW YORK — For much of the last six years, when executives used the word “consolidation” in reference to the textile industry, it was something of a euphemism for companies going out of business.

But during the past year, the business has seen a wave of actual consolidation — competing companies being swept up under common ownership with the goal of cutting costs and improving a competitive position.

The most prominent examples have been investor Wilbur L. Ross’ creation of the $900 million International Textile Group — formed through the purchase and merger of Burlington Industries Inc. and Cone Mills Corp. — and Koch Industries’ acquisition of DuPont’s former Invista fiber unit, which the oil concern combined with its KoSa polyester business to form an $8.4 billion behemoth that is the largest synthetic-fiber maker in the world.

Both new businesses have put much of their early focus on cutting costs. The U.S. textile industry has been struggling, as evidenced by the wave of bankruptcies of major textile mills. Ross’ investment firm, W.L. Ross & Co., bought Burlington and Cone out of Chapter 11 bankruptcy proceedings. While Invista was on firm financial footing at its former parent company, the unit also recorded spotty results during the past few years.

The difficulties will be magnified Jan. 1, when the 147 nations of the World Trade Organization are set to drop the quotas that have regulated the international trade in apparel and textiles for three decades. That’s expected to trigger a wave of intense price competition, as manufacturers in low-wage nations jostle to gain market share.

Ross, who is chairman of Greensboro, N.C.-based ITG, said his company is on track to be ready for next year, having so far cut its annual operating costs by about 3 percent of sales — an estimated $27 million — and with plans to trim another 2 to 3 percent from the budget.

“More importantly, even than what’s already been taken out, there’s more to come from balancing out the production,” he said.

As competitors, Burlington and Cone produced redundant product lines and, in slack demand periods, were unable to run their plants at full capacity. Ross said that was a particular concern in Mexico, where both firms had denim facilities.

“We’re trying to rationalize the production and assure that there are longer runs in both places,” he said.

Larger orders of the same product allow for longer runs, periods when the machinery at a plant is able to run uninterrupted at high efficiency, which translates into lower cost.

In theory, for maximum cost efficiency, a textile plant would run only one fabric, 24 hours a day, seven days a week. However, designers want to be able to buy varieties of fabric, which makes that goal unreasonable. So plant managers try to balance the desire for long runs against the need to produce different varieties of fabric.

But Ross said he didn’t shell out $614 million for Burlington in November and $90 million for Cone in March just to put the squeeze on spending.

“While in most areas we’re cutting costs, there’s one area where we’ve been investing,” he said. “We’re doing quite a bit of R&D; we’ve stepped up the budget at lot at Nano-Tex.”

Nano-Tex is the venture launched by Burlington that develops nanotechnology treatments that offer fabric properties including stain resistance and water resistance. While ITG uses Nano-Tex treatments on its fabrics, it also licenses out the technologies to other mills in the U.S. and abroad.

He said revenues at the Nano-Tex unit have been up 60 percent so far this year compared with last year, with increases of comparable magnitude at the Hong Kong-based Burlington Worldwide unit, which essentially operates as a converter, selling fabrics made by independent mills overseas.

Ross said ITG’s contact with Asian mills through those two units have also “led us into some very active discussions about expanding directly into mainland China and places of that sort.”

In addition, ITG plans to open a denim mill in Guatemala City next year.

Invista, based in Wilmington, Del., is also looking into expanding its manufacturing presence abroad, said Bill Ghitis, president of apparel at the fiber maker.

“We may be investing more in Asia, because that’s where the demand is, but that doesn’t mean that we wouldn’t be investing in Europe or the U.S.,” he said.

In particular, the company is considering investing in additional spandex capacity and is also giving some thought to building new nylon production.

Invista has manufacturing operations in North and South America, Asia and Europe. The merger with the KoSa business also gave it a strong polyester operation. For years, DuPont manufactured all three fibers, but in the time leading up to the sale, it spun off or closed most of its polyester assets.

Since being acquired by Koch for $4.2 billion in April, Invista has laid off several hundred employees at five locations in the U.S. and Europe. Officials at privately held Koch have declined to specify the number of people who’ve been let go, but the reductions at manufacturing sites have been 15 to 25 percent of staff. Koch executives also declined to specify how many people work for the Invista unit. Prior to the sale, DuPont said 18,000 people were employed at that business.

“I can’t say that we actually have consolidated yet,” Ghitis said. “We are going to become more cost-competitive, and that takes many different shapes. It includes being leaner.”

He also said the new ownership will allow Invista to invest more in research and development.

“Koch ownership of Invista allows us to continue to invest with our customers and with the industry,” he said. “You don’t go and spend over $4 billion unless you are committed to the industry.”

After a wave of bankruptcies, some textile mills that survived their time under court protection are attracting new investor interest. Last week, Galey & Lord Inc., which emerged from Chapter 11 in March, agreed to be purchased by a New York investment concern, Patriarch Partners LLP, for an undisclosed sum.

John Heldrich, president and chief executive officer of the Atlanta-based denim mill, said having a single owner would make it easier for the firm to make strategic changes and investments. Currently, ownership in Galey is divided among 20 concerns who gained shares as a result of bankruptcy proceedings.

Referring to Patriarch, he said, “They’ve had a view to try to consolidate and kind of get one view to focus on. It understands our business, understands our environment that we operate in and is committed to being a long-term player with us.”

Lynn Tilton, principal of Patriarch, said her investment would give Galey “the time to really be able to make the changes it needs to make it competitive in this world.”

She said her firm had also invested in the debt or equity of a number of textile concerns, including Duro Industries, Glenoit Industries and New River Industries, but has no plans to seek a merger of any of them.

Heldrich said if the deal is approved by Galey’s shareholders, the new owner would make it possible for the mill to expand its manufacturing footprint abroad. Galey has joint ventures in Mexico, the Philippines and Tunisia.

“We’re looking as to where we can manufacture in lower-cost regions of the world,” he said. “That will continue to be a prime direction.”

Not all industry experts are so heartened by the investments of Ross and Patriarch, calling them short-term moves.

“The industry is basically being sucked up by these bottom-fishers,” said Nick Hahn, a Stamford, Conn.-based consultant. “They come in and they acquire and they consolidate, and they make them more efficient. At the end of the day, they’re going to need to sell them. I don’t see what the future of this is.”