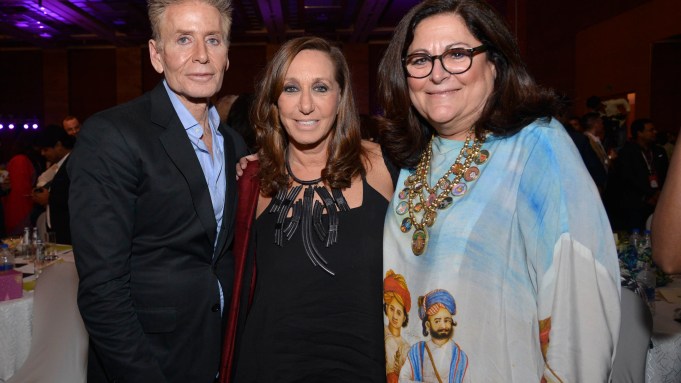 MUMBAI — When Donna Karan took the stage, along with Fern Mallis for an intense conversation about her life and design aesthetic at the Grand Hyatt here on Friday, there was a spellbound silence in the hall. Karan was charming, evocative and friendly, exuding an energy that belied the two months of travel from which she had just arrived. In the forefront of the audience was her friend and fellow traveler of the previous three weeks, Calvin Klein.

Concluding the day’s events and discussions on Friday evening, roles were reversed: Calvin Klein took the stage with Mallis, in an honest and wide-ranging conversation that lasted more than three-quarters of an hour, speaking about the building of his brand, his unique advertising and the fashion industry itself.

The event, a luxury conference organized by business paper Mint, which is published by Hindustan Times, brought in a lineup ranging from market statistics from Abheek Singhi, managing partner at Boston Consulting Group, to an entire day of panel discussions on the market’s direction, including some of the unfulfilled expectations that have been causing heartache to brands. The theme of the conference was “Luxury’s New Frontiers.”

There was a Bollywood presence as well, with well-known actress Katrina Kaif speaking about labels and aesthetic, and Indian designer Manish Malhotra, who shared a platform with Phillips, talking about designing for celebrities and film stars. Malhotra, who designed costumes for movies for a large part of his career and is a favorite in Bollywood, hosted a dinner on Thursday night, with Karan, Mallis, Love, and a host of Bollywood stars including Sonakshi Sinha and Athiya Shetty.

Singhi said India accounts for $15 billion to $20 billion of the global luxury market, which is estimated at $1.7 trillion. China accounts for $100 billion. He said that over the last five years, 60 percent of the industry’s global growth has come from retail expansion. Of that growth, 35 percent is from emerging markets and 25 percent from developed markets. “So while it’s a given that the emerging markets and China are driving the growth of luxury markets, there is also potential to grow in cities like Milan and New York which are still underserved given the actual market potential of these markets,” Singhi said.

Love spoke about the “power of being a trendsetter,” her collaboration with Nasty Gal and her own growth as a rock star and actress. “I have a theory that if you don’t adapt to your surroundings, you will become irrelevant and won’t survive,” she said.

Phillips, who was nominated for Academy Awards for her costumes for “Walk the Line” and “W.E.,” and Malhotra agreed that their best work was created when they were pushed a bit further — “I do my best work when I’m starved, and really hungry,” Malhotra said. Phillips commented that there was a lot about “fear and creativity, and how it can motivate you.” She said that one of the most important things she had learned from Madonna was “not to invest in what other people thought.”

A recurring question was what luxury really meant in a changing world. Singhi said a key point was the way the consumer was changing and that luxury was “no longer about owning, but instead it is about having an experience. It is about being.”

Love said that to her, luxury was “love, unending self-esteem and the space to be yourself.”

Speaking to Mallis, Klein said his definition of luxury “is the utmost in quality in terms of product. Personally, luxury is great space, especially living in New York City. But in product, having the best quality of perfection you can have is true luxury.” He cited the Hermes Kelly bag, which still has a long customer waiting list.

“But luxury is also cashmere, and you can go to Uniqlo to buy a sweater for not very much money, or you can go to Hermes and buy a cashmere sweater for a lot of money. There are differences, but it is still luxury. What we are experiencing is luxury at prices which are more affordable and luxury which is the best of the best,” he observed.

Klein cited smart retailers such as Zara and Uniqlo, which did not use the word luxury: “I know denim — and the denim that Uniqlo uses is a thousand dollars in a designer store on 57th Street. It’s the same denim,” Klein said.

He rued the fact that products from different brands were now available worldwide. “Now, every city in the world has exactly the same thing. And when we talk about luxury, that doesn’t sound too luxurious to me. It’s losing its specialty so that they can have bigger sales.”

In her session, Karan spoke of the difficulty of being a designer in this day and age — “the calendar, the quantity of clothes, particularly in the U.S. — we do four collections a year and that’s a lot of design, design, design. And, generally speaking, the runway shows we do are not where the money is placed. It’s in the pre-fall and the resort collection, because it’s a long sale period. It’s very frustrating to spend so much time and energy to design these shows which don’t really have the financial support,” she remarked.

As for luxury, Karan has a simple, practical approach: “I think women are never going to stop dressing. Once you have experienced quality, it is very hard to go back. Even though the designs may be the same, the feeling is not,” she said.