Shopping is more than a transaction — it’s a form of bonding. And the companies and brands that understand this have the highest sales and profits.

That’s according to MLBM, which recently released its annual Brand Intimacy Survey. The marketing agency surveyed roughly 6,200 consumers across 15 industries and 400 U.S. brands to determine which brands and industries have the highest brand intimacy, or emotional connection with consumers.

Companies in the retail space had the fourth highest brand intimacy score, trailing industries such as media and entertainment, automotive, and technology and telecommunications. But it turns out, across all industries, U.S. businesses that have the strongest brand intimacy perform better than the top Fortune 500 companies or companies listed in the S&P 500. 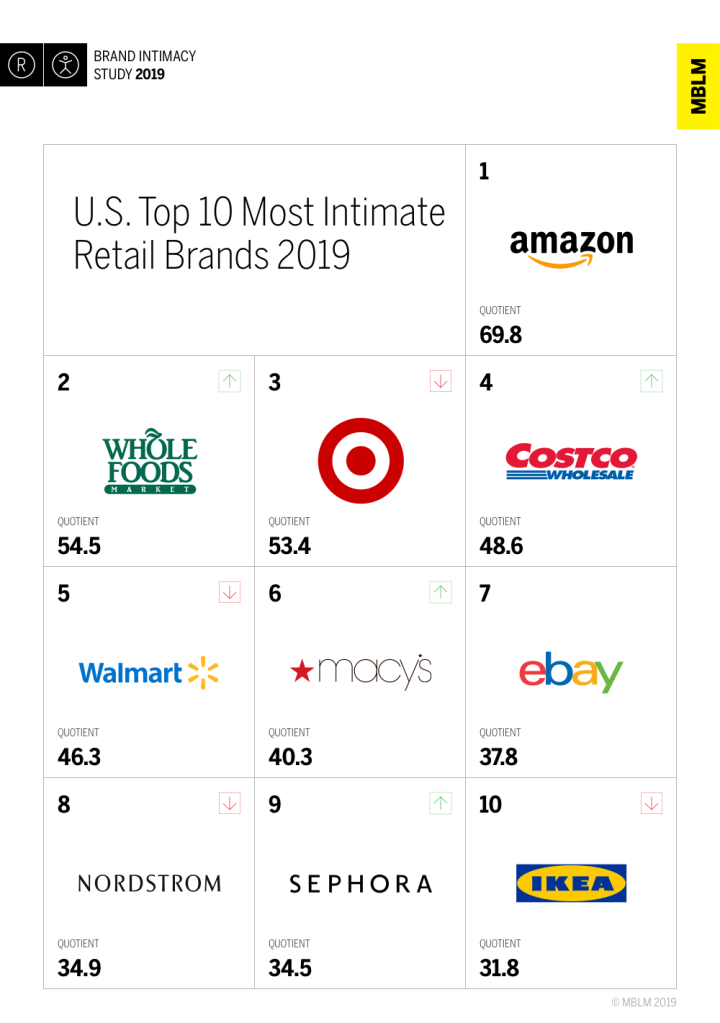 Understanding the emotional connection between brands and consumers is the first step in capitalizing off the trend. Brand intimacy can be accomplished in six different ways: fulfillment, identity, enhancement, ritual, nostalgia and indulgence. Each one satisfies a different need for the consumer. Natarelli added that more does not necessarily equal better. Instead, brands should focus on what they’re good at and look for new ways to deliver their brand message.

Natarelli added that no two brands are alike. Each one has its own unique combination, or brand DNA. And the way consumers bond with products and services can be likened to the way people bond in interpersonal relationships.

The survey found that Amazon had the highest brand intimacy score of U.S. retailers. (It was the third brand in the overall survey, behind only Disney and Apple.)

While Amazon might not seem like a brand that shoppers can easily form a connection with — brands like Harley-Davidson and Victoria’s Secret were among others that scored high on brand intimacy; brands that often trigger a strong emotional reaction among users — Amazon actually has a few things going for it. Like fulfillment, enhancement and ritual.

When consumers think of a product they want or need it shows up on their doorstep in a day or less. That’s how Amazon satisfies fulfillment. The speedy service also suggests the idea that the e-commerce platform is somehow enhancing the lives of its users. And with the convenience of online shopping and same-day service, Amazon has tapped into the ritual effect — something that is essential.

“People who have Prime or use some of their other products can’t imagine living without that,” Natarelli said. “That’s a pretty important role that it plays in [the consumer’s] life.

“All these things are really powerful,” he said. “One of the reasons Amazon does better than all the other retailers is that the way it bonds with its customers is very different. If you’re a different retailer, you shouldn’t try to mimic the way Amazon does it. You should try to be true to your brand and do it in more powerful ways. It’s knowing which ones you’re strong in, knowing which ones your competitors are strong in and where can you either build differentiation or build strength.”

Other retail and apparel brands that scored high on brand intimacy were Target, Sephora, Walmart, Macy’s and Nordstrom. Nike and Victoria’s Secret had the highest brand intimacy scores among U.S. apparel-makers.