The French retail group confirmed that it had breached leverage and interest covenants on its loans in May. 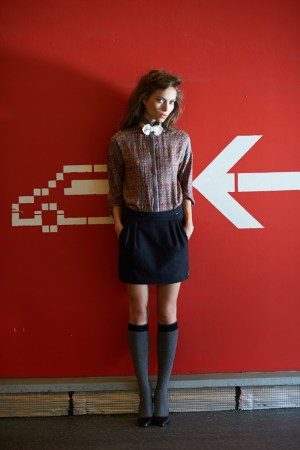 PARIS — Vivarte on Wednesday confirmed that it had breached leverage and interest covenants on its loans in May as its sales faltered due to tough trading conditions. The French retail group said it would still be able to meet its debt commitments.

“This absolutely does not call into question the medium-term strategy conducted by the management of the group, nor its capacity for honoring its financial obligations,” Vivarte said in a joint statement with Charterhouse Capital Partners, the British private equity firm that holds 64 percent of its capital.

Furthermore, Charterhouse quashed speculation that it would seek to dispose of its stake, acquired through a leveraged buyout in 2007. “There is no plan to sell our stake in Vivarte. These are merely ill-intentioned market rumors,” a spokesman for the equity firm said Wednesday.

A footwear and apparel specialist whose stable of 15 brands includes Caroll, Naf Naf, Chevignon, André, Minelli and Pataugas, Vivarte secured a deal in 2012 extending the maturities on 70 percent of its debt, worth 2.5 billion euros, or about $3 billion at the time.

The group is battling a morose economic climate with an all-out effort to renovate and reinvigorate banners ranging from Kookaï to La Halle.

“I am of the opinion — probably because of my background in luxury — that when something is aspirational, when it generates desire, when a brand has real appeal, then the customer will follow,” said chief executive officer Marc Lelandais, who joined Vivarte from Lancel one year ago. “For me, the approach is really about reinstating fun shopping.”

The debt situation puts pressure on the executive to deliver on his strategy to revitalize the group’s network of 4,800 stores and boost sales in France, which accounts for 85 percent of sales.

Vivarte has allocated two-thirds of the planned capital expenditure on retail to renovating stores, with one-third dedicated to opening new units. Lelandais said the company planned to renovate between 500 and 700 units per year over the next five years.

“The crisis has acted as a catalyst, shining a light on retailers and revealing their shortcomings,” he said in an interview. “Customers can immediately spot a brand that does not have a strong enough message, so renovating existing stores throughout the retail sector has become a priority nowadays.”

At the same time, the group is revamping the product lines and image of its key brands by bringing in new designers and brand ambassadors. “Each of our brands, to varying degrees, has started working on new concepts. Some are ready, others will be ready in six months,” Lelandais said.

Declining to disclose the total amount of the investments, the executive said Vivarte should have a net cash position of 600 million euros, or $783 million at current exchange, by the close of its financial year on Aug. 31 — “almost double” last year’s level.

This has been boosted by the sale-and-leaseback of a number of properties, including Vivarte’s Paris headquarters.

“There is no intention to redirect that money toward investments,” Lelandais said of the property deals. “Today in France, you have to reduce your debt. It’s a deflationist country, so I don’t really see a solution apart from being aggressive on exports, aggressive on reducing debt and agile in terms of repositioning your offer.”

Sales for the first 10 months of the 2012-13 financial year were down 2.5 percent, said Vivarte, noting that revenues were hit by bad weather between March and May, but picked up again in June and July. It added that its margins were stable and its operating margin is above 12 percent.

“This result is in line with our objectives, since it’s a year of repositioning, of restructuring, of in-depth analysis,” noted Lelandais.

Smaller-scale brands Beryl, Les Fées de Bengale, Mosquitos and Coctel have been shuttered, while the Accessoire Diffusion and Maloles shoe brands have been folded into CosmoParis.

The consolidation is designed to allow Vivarte to focus on its top brands.

This fall will see the launch of an advertising campaign for Kookaï starring the fashion brand’s new face, French actress Mylène Jampanoï, who is also designing a handbag for spring 2014.

Caroll, celebrating its 50th anniversary, has hired Sienna Miller as brand ambassador and is preparing to launch an “It” bag in fall.

Naf Naf, which targets the 15- to 25-year-old set, is about to embark on a transformation, starting with its fall advertising campaign, which will feature an as-yet-undisclosed Anglo-Saxon brand ambassador.

Meanwhile, high-street chains La Halle and La Halle aux Chaussures are undergoing a total revamp of their collections and store concepts, the latter of which are being tested at two locations on the outskirts of Paris.

At André, the footwear specialist that opened its first stores in Paris in 1904, Lionel Giraud — previously at Chaumet and Courrèges — was recently appointed ceo, charged with spearheading that brand’s renewal.

Perhaps not surprisingly, considering his background in leather goods, Lelandais plans to significantly increase the contribution of accessories to overall sales.