Denim Dish: A. Denim by Any Other Name … All That Glitters … Avondale Boosts Bottom Line

DISH: A.B.S. partners Allen B. Schwartz and Armand Marciano are rolling out A. Denim…Avondale back in the black…A.P.O. Jeans aims high. 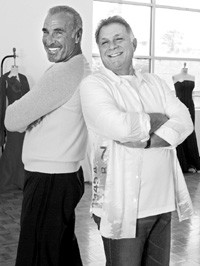 A. Denim by Any Other Name

Allen B. Schwartz and Armand Marciano, the partners behind A.B.S. by Allen Schwartz, are rolling out their first store devoted to denim.

Called A. Denim by Allen Schwartz, the 1,000-square-foot space is located in the upscale Los Angeles community of Brentwood and is set to open Oct. 29. Among its neighbors are Ron Herman, Theodore, Boulmiche, M. Fredric and BCBG Max Azria.

“I want the consumer to see the brand in its entirety as opposed to the picked-through offerings at retailers,” Schwartz said. “They may see two styles, and I’ve got over 40.”

Decor takes a backseat in the duo’s “denim bar,” where the design aesthetic is minimalist. It won’t get any fancier than stained concrete floors, white walls and clean, saloon doors framing the dressing rooms.

The goal is to not overshadow the displays of the company’s two denim lines: Allen B. and A. Denim. Allen B. is the six-year-old line focusing on highly embellished product. Embroideries and Swarovski crystal details are a few of the touches that notch up retail price points to $400 for a pair of jeans.

A. Denim is the company’s newest product, hitting stores next month. It offers jeans that retail for under $200, featuring multicolor threads and trims, extra hardware and waistband details. For spring, the line of cropped pants, skirts, zip-up jackets, and yarn-dyed tops and T-shirts is a showcase of color in kelly green, terra-cotta, optic white and aqua.

Schwartz said he hasn’t opened a new store since 1988, when the A.B.S. by Allen Schwartz unit debuted on Montana Avenue in Santa Monica. To date, he has five A.B.S. locations. He’s consider opening more A. Denim stores in Los Angeles and Orange counties in California, depending on the success of the first unit, which is expected to bring in $750,000 in first-year sales.

The always ambitious Schwartz said, “I can see 100 of these in the next five years if this works.”

Schwartz and Marciano are also plowing ahead with plans to grow the A.B.S. by Allen Schwartz line. They’ve inked activewear and suit licensing deals in the last 90 days. Morsley Inc. will design and distribute the activewear collection of cotton and cashmere separates slated for Feb. 28 delivery. Zaralo Inc. has signed on as licensee for suits and will also produce jackets, slacks, miniskirts and peg skirts geared for a spring shipment.

By the end of the year, Schwartz expects to close on at least three more licenses. Licensing is the ticket to growth for the company, which Schwartz bought back from Warnaco Group last year in partnership with Marciano.

During the last four years, new jeans lines from the West Coast, Europe and Asia have redefined the upper limit of what customers are willing to pay for jeans, creating the premium and superpremium tiers of denim, with retail prices crossing $200.

Stewart, a graduate of Miss Wade’s Fashion Merchandising College in Dallas, is launching the A.P.O. Jeans line, which is decked out in precious metals and stones and tops out at the $4,000 retail mark.

The jeans are accessorized with diamonds and trimmed in gold, and also use Suvin cotton from India.

“It’s one of the most expensive cottons out there,” Stewart said. “It costs about $40 a yard.”

Stewart’s operation is small. He answers his own phone, handles his own publicity and keeps his denim manufacturing facility one floor below his office. So far, he’s sold four pairs.

A.P.O. Jeans clearly are not for everyone — and they’re certainly not for every occasion. Stewart calls them “personalized designer jeans.” Each customized pair can feature buttons and rivets made with pure silver, 14-karat gold and diamonds. The cheapest pair, made with silver detailing, cost $1,000 retail. Styles with diamonds and gold easily break the $4,000 mark.

Consumers may only purchase A.P.O. Jeans through the brand’s Web site, apojeans.net, launched in September. Each pair is custom made, so measurements can be plugged into an order form. For clients who want to replicate the fit of a favorite pair of old jeans, Stewart recommends sending them to him so he can duplicate the fit. From there, the jeans are adorned with the specified gems and the client’s name, and an identification number is printed on the tag. A certificate of birth and an appraisal certificate are mailed to clients to inform them how much the stones are worth. Turnaround takes about two to three weeks.

“Everything is done by hand,” Stewart said.

By September 2005, Stewart predicts his wholesale volume will break $2 million, which would require meteoric growth from his results to date.

“We need to build the brand before we do wholesale, but we’re going to do it,” he said.

The brand puts a lot of focus on the details of its products: The pockets are lined with silk and satin, and the hemline is created with a flat-felt technique.

“You can’t tell where the stitching begins or ends, so it’s very hard to duplicate,” Stewart said.

His goal is planting his styles on a few celebrities.

“By having high-profile people wear the jeans, you cut down on money spent on marketing and advertising,” Stewart said.

He hopes to boost the brand’s notoriety by placements, such as donating pairs of jeans to be auctioned at charity events such as the Community Access Gala, where Sen. Hillary Rodham Clinton serves as honorary chair, and Pink Fusion, which raising money for breast cancer research.

“Word is getting out,” Stewart said.
— Lauren DeCarlo

Denim maker Avondale Inc. posted net income of $8.1 million in its fourth quarter ended Aug. 27, bouncing back from a $7.7 million net loss a year earlier. The profit included a $17 million pretax gain related to paying off some debt early.

“The business environment is difficult due to international trade manipulations that are beyond Avondale’s control,” said G. Stephen Felker, chairman and chief executive officer.

Avondale is among the chorus of U.S. manufacturers that assert that China’s fixed-exchange rate of 8.28 yuan to the dollar undervalues its currency by as much as 40 percent, making its exports seem artificially inexpensive.

“We are in an extended global war for the U.S. consumer market,” he continued, in a statement. “Massive amounts of productive capacity and resulting excess supply have been introduced to the market, mostly from Asia, with no apparent plan other than to take market share.”

He noted that the Monroe, Ga.-based company had cut its net debt by about $25 million over the course of the year. The mill’s long-term debt stood at $163.5 million at the end of fiscal 2003. The privately held company discloses its financial results because it has some publicly traded bonds.