The brand seeks about $300 million in damages from nine defendants responsible for counterfeit products and 83 unauthorized Web sites. 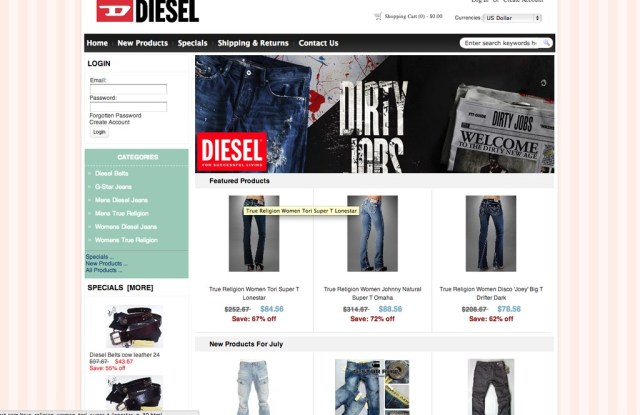 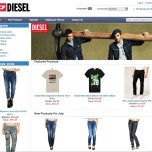 Diesel has drawn a thick line in the granular sands of cyberspace.

This story first appeared in the July 10, 2014 issue of WWD. Subscribe Today.

The Breganze, Italy-based denim and sportswear brand has filed suit in U.S. District Court for the Southern District of New York charging nine defendants with selling counterfeit Diesel products through a network of 83 different Web sites, all using the Diesel brand in their domain names without authorization and all but three of them using the word “jeans” as well.

The defendants are referred to as “John Does 1-9” as the identities of the individuals or entities involved aren’t known.

But Diesel said that it engaged OpSec Security to untangle the vast network of Web sites and found nine “infringing families” behind them. The largest, described in court papers as “Infringing Family 2,” controlled 45 of the sites while three of the nine supervised just two each. Some of the site names were straightforward, such as buydieseljeansonline.net, while others suggested geographic origins (dieseljeansoutletuk.com) or suggestions of the brand’s heritage (dieseljeansclassic.net). Those still in operation made extensive use of Diesel’s logo and other trademarks, 14 of which were cited in the suit, although court papers pointed out that, based on a review by a Diesel USA employee, the products being sold weren’t authentic Diesel merchandise.

Diesel’s official Web site can be found at diesel.com.

“The unlawful use of Diesel trademarks to sell counterfeit goods through various retail Web sites around the world injures our customers who think they are buying a Diesel-quality product,” said Renzo Rosso, founder of Diesel and its parent company, OTB. “In addition, these Web sites damage the brand’s reputation and goodwill, hindering the distinctiveness of authentic Diesel products’ trademark quality and craftsmanship.”

In addition to injunctive relief, the plaintiffs are seeking treble damages for all losses suffered by Diesel and all profits derived by the defendants, plus attorneys’ fees. Alternatively, Diesel is asking for damages of $30 million per defendant, or $270 million, and $2 million for each of the 14 trademarks allegedly infringed, or $28 million, plus costs of the suit.

Diesel has recently picked up the pace of efforts to combat counterfeiting and cybersquatting. Last year, it said, more than 70,000 counterfeit Diesel products were seized by Chinese customs and another 35,000 by European customs officials, who withheld another 15,000 products during the first six months of 2014.

This year, an online brand protection program has been instrumental in shutting down 120 infringing sites, blocking more than 1,000 sellers and removing about 400,000 items.

In recent years, brands including Ralph Lauren, The North Face, Tory Burch, MAC Cosmetics, the Estée Lauder Cos. Inc., Coach, Gucci and Salvatore Ferragamo have prevailed in cybersquatting suits, and True Religion Apparel Inc. was rewarded $863.9 million in damages in a case against 106 Chinese cybersquatters in 2012.

While collection of damages is in most cases impossible, the suits have accelerated the shutdown of offending sites and at least slowed efforts by offending parties to resume operations, even if under another brand name.

The plaintiffs are seeking a jury trial in a case assigned to Judge Kimba Wood.

Arent Fox LLP is serving as counsel for the plaintiffs.