VF Corp. is now all about lifestyle, while Warren Buffett is out to get more intimate with America's consumers. 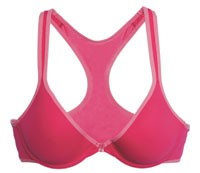 VF Corp. is now all about lifestyle, while Warren Buffett is out to get more intimate with America’s consumers.

Those two strategies were apparent Tuesday in VF’s decision to sell its $800 million intimate apparel business to Buffett’s Fruit of the Loom Inc. for $350 million in cash.

The deal, which is subject to government approval, is expected to be finalized within the next four-to-eight weeks, said a Fruit of the Loom spokesman.

For Buffett, the purchase solidifies Fruit of the Loom’s increasing hold on the mass market intimate apparel business in retailers such as Wal-Mart, Kmart and Target. It also bulks up Fruit of the Loom, which has estimated sales of $1.6 billion annually, to be better able to compete with the $4.5 billion behemoth Hanesbrands, created last September via a spin-off from Sara Lee.

As for VF, Mackey J. McDonald, the company’s chairman and chief executive officer, said in a conference call, “With over $800 million in revenues and approximately $50 million in operating income, our intimates business represents 12 percent of VF’s total revenues and 6 percent of operating income. We plan to use the proceeds from the sale to repurchase shares this year.”

McDonald said that, since the inception of the company’s growth plan in 2004, VF has made significant progress in transforming the firm into a higher-growth, higher-margin company. About 70 percent of revenues come from its heritage businesses in jeanswear, imagewear and intimates, with 30 percent from lifestyle segments, both outdoor and sportswear.

“The plan established a target of 60 percent of revenues from our lifestyle businesses over a five-year period,” he said of the group, which has sales of about $6 billion a year. “As a result of the sale of our intimates business and the continued strong growth in outdoor, our lifestyle segment now accounts for 40 percent of total revenues.”

He noted the intimates business has been operating “well below our 14 percent operating margin target for two years now,” and that the investments required to improve margins were better deployed toward opportunities in its other businesses. The ceo added that, following completion of the sale to Fruit of the Loom, the intimates team will continue to run the business from its current U.S. and European headquarters and that customers should expect no business disruption due to the sale.

In a phone interview, Eric Wiseman, VF’s president and chief operating officer, said the group has been “making a lot of investments in our outdoor coalition, with a focus on developing lifestyle brands” such as Nautica, Vans, The North Face, JanSport, Wrangler and Lee.

“The intimate apparel business has not been performing at a historical level,” Wiseman said. “We think with the right investment, it can return to its historic rate and performance levels and we think Fruit of the Loom can do that. I do know that Fruit of the Loom is committed to the intimate apparel business. But how they will do that is up to them.”

He expects Fruit of the Loom to operate the brands acquired from VF as a stand-alone company.

Wiseman added that he felt “a little bittersweet” about the deal. He said, “The Vanity Fair brand was the founding brand of our [intimates] coalition. What I feel good about is it’s allowing us to invest in other lines of business. But I feel better for the [intimates] management teams and the fact that Fruit of the Loom will invest in the brand for its full potential.”

Industry executives weighed the strengths and weaknesses of such an acquisition by business guru Buffet.

The investor has been active in the intimates, underwear and activewear fields for the past five years. His holding company, Berkshire Hathaway Inc., acquired FTL for $835 million in 2002 and Russell Corp. for $600 million in 2006. After acquiring FTL, Buffet rehired John Holland, a former chairman who now serves as the company’s ceo. In a statement Tuesday, Holland said he was “most impressed with the heritage, experience and innovative talent of the VF Intimates worldwide team.” The intimates coalition employs about 9,000 workers worldwide.

A few years ago, VF’s Global Intimate Apparel Coalition, which in the U.S. includes brands such as Vanity Fair, Vassarette, Lily of France, Bestform, Exquisiteform and Curvation, and European labels Lou, Gemma and Belcor, was the company’s darling. It represented the second-largest line of business after jeanswear, accounting for 17 percent of volume of $5.5 billion in 2001. Today, intimates represents 2 percent of overall revenues, and about 6 percent of VF’s total 2006 operating income, or $50 million.

FTL specializes in branded and private label cotton underwear, T-shirts and casualwear for men, women and children at mass merchants including Wal-Mart, Kmart and Target. Innerwear executives said its likely strategy for the newly acquired brands will be to expand distribution to department stores with the coveted Vanity Fair brand name. There’s also a lucrative possibility of reintroducing categories such as robes, loungewear, sleepwear and daywear bearing the national Vanity Fair brand name.

“Vanity Fair always had the best name in sleepwear, robes and daywear for decades,” said Janet Peters, a former vice president of design and a vice president of VF. “Maybe the thought will be to expand into other categories other than bras in the new organization.”

One veteran executive who did not want to be identified said he believes FTL’s move is to be “head-on competitive with the new Hanesbrands company.”

“VF wanted $400 million to break even, but they’ve had to take a $45 million charge,” he said. “For whatever reason, their management had not been able to be competitive in the marketplace. With Warnaco being weak and Sara Lee’s divestiture of Hanes, I think VF management focused on [outerwear] lifestyle brands. Intimates didn’t fit their vision of lifestyle brands.

“Holland is clearly on a mission. This is really setting up some interesting dynamics in the commodity intimates world. It looks like Holland is putting together another Hanes. They’ve got Fruit of the Loom underwear, Russell activewear and now VF’s intimate apparel.”

Another key to FTL’s strategy could be bolstering its presence in the mass bra market. VF’s successful mass brands, Vassarette, Real Sexy by Vassarette, Bestform and Curvation, could present a powerful presence in mass channels when teamed with Fruit of the Loom bras.

Robert K. Shearer, VF’s senior vice president and chief financial officer, said the company expects to post a $44 million loss on the sale of the business, or 40 cents a share, which includes the write-off of $55 million of accumulated foreign currency translation losses.

For 2007, the company said it expects revenues to increase 8 percent, with growth in EPS from continuing operations of 10 percent.