The British bootmaker is joining a raft of fashion and accessories brands tapping into the buoyant public markets.

LONDON — Dr. Martens is expected to make its debut on the London Stock Exchange early next week with a market capitalization ranging from 3.30 billion pounds to 3.70 billion pounds, according to the company which, kicked off its roadshow Jan. 25.

Following the roadshow, the company said it would price the shares on Feb. 1, with the first day of trading on Feb. 2. Those dates could be pushed forward though, with a listing potentially as early as this week.

Dr. Martens’ private equity parent Permira — which purchased the bootmaker in 2013 for 300 million pounds — will retain a majority stake in the company. Based on the current figures, Permira’s equity will be worth around 2.6 billion pounds.

According to The Sunday Times of London, chief executive officer Kenny Wilson is in line for a windfall of 58 million pounds following the IPO, while a group of former employees will pocket shares worth 150 million pounds.

More than 2,200 junior staff will get cash bonuses following the float. The Griggs family, which sold its majority stake to Permira, had held on to around 10 percent of the company, so its stake will be worth 330 million pounds.

Dr. Martens will follow online multibrand retailer Mytheresa onto the public markets. Mytheresa listed last week, and saw its shares rise 8.5 percent to $33.64 in midday trading on Friday, Jan. 22 — adding to gains made during its initial public offering a day earlier.

The Munich-based luxury e-tailer is now valued at $3 billion, up 87 percent from where the New York Stock Exchange offering was initially priced for institutional investors late Wednesday.

As reported, Mytheresa plans on using the $354.8 million it raised in the offering to pay off a loan from its primary backer — private equity firm Ares Management — and grab a bigger slice of growing e-commerce pie.

Dr. Martens parent Permira said since buying the footwear brand in 2013, it has made “significant investments in professionalizing the business,” including improving its operational backbone, shifting its focus to emphasize the direct-to-consumer channel, and allowing it to grow rapidly, “delivering a strong and improving financial profile in recent years.”

The company said the e-commerce channel has been one of the key contributors to the brand’s “substantial growth,” and is expected to continue to be the main driver in the coming years.

The group also sells its footwear through more than 130 own retail stores, which act as “profitable and important consumer touchpoints.” It also has concessions, wholesale customers, distributors and franchisees. 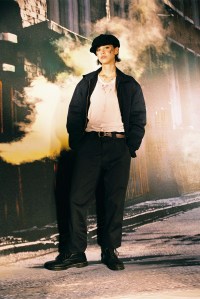 Wilson said the plans for an IPO “reflect the great achievements of the Dr. Martens team and brand over the last seven years. Even more important is the significant global growth potential for Dr. Martens in the future. We have invested massively to ensure that we deliver the best digital and store experiences to connect with our wearers, and through this we are driving our long-term, sustainable growth.”

Dr. Martens said that, over the past years, it has built an “integrated global supply chain” so the business can scale sustainably across geographies and channels, in addition to reducing costs. The group said it has a “significant opportunity” to expand in the 341 billion pounds’ global footwear market, and added it already has a strong customer base in the U.K., France, Italy, Germany, the U.S., Japan and China.

The product has long had a democratic, unisex appeal. Although the brand is most often associated with punk and counter-culture movements, the boots are best-known today for comfort, durability and a tough-chic appeal.