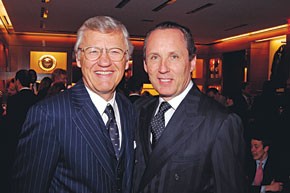 “Everybody’s trying to figure out what to do about the economy,” said Allen Questrom, now a senior adviser to Lee Equity Partners. “It’s going to [be] a little longer term than people think.”

Retailers, he said, are going to have to keep their heads. “It’s a matter of patience and not overreacting.”

The economy has put the brakes on more than consumer spending — deal-making for fashion brands has also slowed as bankers and buyers alike take a cautious stance. Frasch, in response to a question, said he was “advising a friend” who was looking into starting a blank check company that would raise funds specifically to make an acquisition.

“This thing started before the economy [worsened],” he said. “We’re proceeding slowly.”

But the economic freeze will thaw eventually and deal-making will resume. When it does, Domenico De Sole, the business partner of Tom Ford (whose collection is produced by Zegna), said sovereign wealth funds, large pools of money controlled by governments, would be even bigger players in the luxury market.

“The reality is there’s a huge amount of money in those funds,” he said. “You’ll see more and more.” In part, he said it’s just a matter of who has the capital and who can use it. Luxury also is an attractive investment in its own right. “It’s a great industry with very high margins,” he said.

And so it is with Tom Ford. De Sole said the Tom Ford store on Madison Avenue is doing twice as well as expected. “The business is doing so well that we’re overjoyed,” he said.