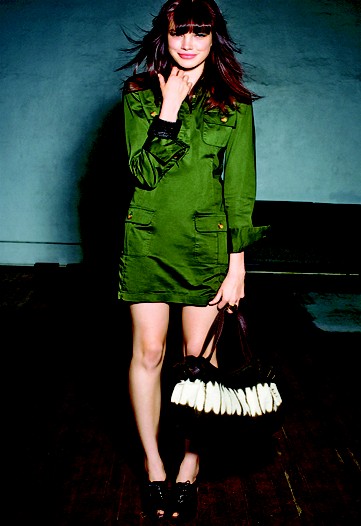 As the rising prices of food and gas constrict the average American’s discretionary income, it’s no surprise teachers are among the hardest hit.

Teachers from across the country are reporting they are spending less on clothes, waiting for sales and sometimes changing where they shop — even after some taking summer jobs to offset the increasing cost of living, according to an informal survey by WWD.

The average teacher earned $50,816 in the 2006-2007 school year, according to the National Education Association. Beginning salaries typically start around $30,000, and pay increases often lag behind inflation, according to the NEA, which noted that in the past decade, after adjusting for inflation, the average salary for public school teachers increased only 1.3 percent.

This strain leads to attrition: One in five new public school teachers quits by the end of the first year, and almost half leave within five years, according to the NEA. Programs like Teach for America encourage recent college graduates to teach for short stints.

Although neither the NEA nor other teacher or retail groups have surveyed teachers on apparel spending, a spokesman from the National Parent Teacher Association said he suspects many teachers are choosing to dress their classrooms before they dress themselves.

“Because every year schools and teachers are asked to do more with less, teachers may choose to ensure their classroom is adequately equipped for their students to learn before buying new apparel,” said a National PTA spokesman. “As it is, teachers rely heavily on parent groups for help in supplies. Overall, the economy is affecting education everywhere.”

Buying those school supplies is no small cost. Teachers spend an average of $1,200 out of their own pocket on supplies for their classroom, according to Jones Apparel Group Inc., which sponsors Jones in the Classroom, which does makeovers of both teachers and their classrooms.

According to Market Data Retrieval’s new report “A Look at Teachers in the Consumer Market,” which surveyed 1,000 educators, Wal-Mart ranked as the most popular retailer for teachers in the past three months, with 61 percent of teachers visiting the low-cost retailer in that time period, followed by Target, which 57 percent of teachers visited. A third visited J.C. Penney, followed by Kohl’s (31 percent), Macy’s (27 percent), Sears (26 percent), Old Navy (25 percent), Kmart (19 percent), Gap (19 percent) and Costco (18 percent). The study added that, despite teachers’ interest in bargains, they do not shop at the deep-discount retailers, such as Big Lots and Dollar General, as often as the general population.

According to MDR’s research, teachers’ “attitude about apparel is traditional and conservative.” Comfort tops the list of factors in choosing apparel, with 89 percent of educators saying it influences their clothing buys. Function ranks next, with 79 percent citing it as a key criterion. Four out of five teachers prefer traditional styles. Teachers are also incredibly brand loyal. Two-thirds have favorite brands they stick with, compared with 55 percent of the general population, and half look for their favorite brands first when they shop, compared with 40 percent of the general population. In shopping for apparel, 73 percent of teachers seek out stores that carry their favorite brand names and 77 percent said they would pay more for a high-quality product.

“Educators are an extremely attractive consumer segment,” said Moira McArdle, MDR vice president of marketing, adding that teachers “buy more in most every consumer vertical, from apparel to travel to financial services.”

Teachers surveyed by WWD said they are looking for items they can incorporate into their current wardrobe, like colorful blouses. Comfortable shoes also top back-to-school lists. Mostly, they are shopping sales and waiting longer to get reduced prices. On average, the teachers surveyed by WWD plan to spend between $300 and $600 on clothes and apparel for fall.

A 30-year-old sixth grade social studies teacher, Jen Coy, lives in Austin, Tex., but teaches in Hutto, so has a daily 20-minute drive each way. Because of the rising gas prices, Coy took a part-time job over the summer.

“But even then I’m going to have to put off my school shopping until I get my next paycheck, which isn’t until the first week of school,” Coy said. “That’s definitely taken some of the fun out of preparing to go back to school.…I [usually] don’t start my shopping until about a week before school starts, because it adds to the excitement of a new school year. I was that kid who couldn’t wait to go back-to-school shopping whatever the item (clothes, supplies, groceries), and that excitement has carried over into my adult life.”

As a curvy woman, Coy sticks with flattering looks such as wrap styles and flare-leg pants. She said she spends more on her accessories, like big jewelry and purses, than on apparel, and also invests in quality undergarments. Coy always sticks to what she calls “budget shopping.” She typically frequents Target, Old Navy and New York & Company, but this year “I’ve started looking at Marshall’s and Ross for maximum discount, and my stepmom’s consignment shop has been a good wardrobe source,” Coy said. “I would estimate at least $100 less a month will be spent on my wardrobe this year, and I’ll re-wear things from last year, which is a major change for me…because of the rising cost of living.”

Jenny Austen, a 31-year-old middle school Spanish teacher at Charlotte Latin School in Charlotte, N.C., started her b-t-s shopping during her area’s tax-free weekend. She’s spending about $300 this year on blouses and pants, but found herself priced out of a favorite store. “I waited for sales and found that Banana Republic was just too expensive for me this year, but Old Navy had some great things that you could dress up or down,” Austen said.

Katie Keenan, a 25-year-old middle school history teacher at Fonville Middle School in Houston, estimated she will spend $600 to $1,000 on clothes and accessories this fall.

“I definitely spent a lot less on clothes then I have in the past,” Keenan said. “I also rarely buy something for full price. Since I live in Houston, I can still buy some neutral summer items and wear them up until about November.”

Keenan loves color and said her go-to outfit is a flowy blouse with a pencil skirt. She recently bought a purple jewel-toned blouse from H&M. “I love jersey dresses from Barneys Co-op for work, Banana Republic has nice, less expensive staples, Urban Outfitters for cheap fun accessories, Nordstrom’s, and only sales at Saks and Neiman Marcus,” Keenan said. “I find the best deals online at Hautelook and Shopbop. Any higher-end stuff I have to wait until there are big sales and hope for the best.”

But Keenan has one budget-saving tip. “I think I am kind of lucky because at my age I still live with girl roommates and we basically have double the wardrobe,” she said. “Sometimes if we really want something we will go in on it together and figure out later who gets it once we move out.”

Sara Bailey Nagorski, a 28-year-old who teaches freshmen in the University Writing Program at Columbia University in Manhattan, predicted she will cut her spending in half this fall. So far, she has bought two pairs of Seven For All Mankind jeans and a couple of shirts from Pink.

“I’ll probably try to curb my shopping some this year, because saving has gotten more difficult,” Nagorski said. “Unless there’s something else I need, or something I can’t live without, I’ll probably try to get by until the Thanksgiving sales. I’m not sure if it’s the economy, or living in New York City, but this past year I’ve tried more to find things on sale. I’ve also bought more staples. For instance, rather than buying more stylish clothes, I’ve tried to stick with more conservative fashions that will last longer. I’ve also bought less, or rather less purchases I want and more of what I need. I’ve also tried to find clothes that I can wear to work as well as out, which is why I like the Pink shirts, particularly the ones with the small ruffles, since those double well.”

After graduating from college in May, 22-year-old Kristina Mahoney is starting her first year of teaching second grade at Hope Valley Elementary in Durham, N.C.

“As a first-year teacher, I want to look professional and still be able to run around the playground,” Mahoney said. “I sought out summer sales at Banana Republic and Shopbop.com for colorful tops and printed skirts and sweaters. I also found pieces from Richard Chai’s Target line that allowed me to get designer style at a very affordable price. I splurged on flats by Kate Spade and Cynthia Vincent, which are comfortable and kid-friendly, but still fashionable.”

Alexandra Dudas, a 23-year-old second grade teacher at Cunningham Park Elementary School in Vienna, Va., supplements her annual income by teaching math camp in the summer. Dudas has spent about $460 on b-t-s shopping at Tysons Corner Center in McLean, Va., where she shops at Express, Nordstrom and Lilly Pulitzer. She bought a pair of Jack Rogers pink and white sandals and three pairs of Steve Maddens (black midcalf boots, black leather sandals and plaid flats) at Nordstrom’s anniversary sale, as well as a short-sleeve pink blazer. At Express she bought a sleeveless floral top and at Lilly Pulitzer she picked up a pink polo.

“I didn’t buy that many items, because what I did buy will update my current work wardrobe. I love all of my new items because I can mix and match with slacks, capri-length pants or skirts to create cute work outfits,” Dudas said. “I have a stable, well-paying job as a teacher; I know what my budget is and as a result, the economy has not affected my spending on clothing.”