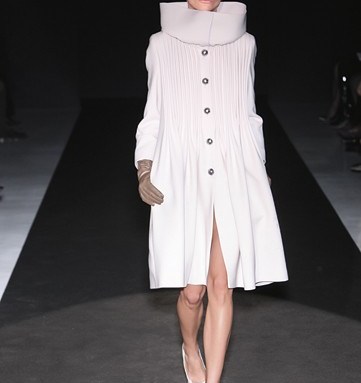 BERLIN — Tough times persist at Escada — and its management admits there’s no end in sight this year.

Against a backdrop of ongoing restructuring costs and a weakened luxury market, Escada’s management sees little relief in the year ahead. For fiscal 2009, Escada is projecting a decline in group sales of “between a high single-digit and lower double-digit percentage range.”

The company is in the “midst of a full-scale reorientation,” chief executive officer Bruno Sälzer said. “Given the systemic lead times of over a year in the fashion industry, the effects will not become visible in the short term.” Nevertheless, he said he expects the downturn to soften somewhat.

However, the company is facing a credit crunch. To generate needed funds, Escada said Tuesday that it will propose a reduction in the company’s capital stock by 48.9 million euros, or $63.5 million, at the annual shareholders’ meeting April 28. The amount equals the balance sheet loss for fiscal 2008.

The calculated portion of each share in the capital stock would decline from 5.12 euros, or $6.65 at current exchange, to 2.78 euros, or $3.61, in a move that would “facilitate the issue of new shares.” As Escada pointed out, new shares issued under a capital increase cannot fall below this level.

Escada also said it was in “intensive negotiations” with capital and credit lenders to secure midterm financing.

According to a source, Escada’s largest shareholders, the Herz brothers, who together hold about a 25 percent stake, intend to participate in the new capital increase. However, the source also said they wish to keep their interest in the company below 30 percent and want other shareholders, including Russian investor and former major shareholder Rustam Aksenenko, to acquire new shares in the company.

Now eight months at the helm, Sälzer faces admittedly substantial challenges, which have been further exacerbated by the global economic crisis. But his approach from Day One has been to rapidly institute a culture of change at the company.

In what could be described as shock therapy, the ex-Hugo Boss ceo refilled 20 of the group’s 30 top management positions since coming on board in July.

“Especially in fashion, a new approach means new people,” he suggested. “The basic idea from my side and also from the Herz family is not just to build a company for one, two or five seasons, but to professionalize the systems, procedures and process of how we do fashion.”

A pragmatist who believes in an almost automotive approach to managing the fashion supply and production chain, Sälzer introduced the Pegasus project at Escada to optimize operations. Pegasus will be completed in 2011, but Sälzer said the effects of the information technology program would be felt in the next year.

Similar to Hugo Boss’ successful Columbus Project, Pegasus is about bringing every step of the chain in line: from sourcing to design, production to distribution, and making sure the people involved are not only on top of their own function, but the step that proceeds and follows.

As he outlined it, “It starts with what week do we need a dress in the store in Mexico City? And this week in Mexico City decides everything, even thinking about that dress in Munich. Because if we lose two weeks’ time and the dress is too late, we lose 30 percent of our chance of selling it full price. No matter how fantastic the idea and the creative effort is, [the dress won’t be sold] if it’s party season in Latin America and the party dress arrives after the party is over.

“A lot of fashion companies don’t like to think like this,” he continued. “Everyone at Escada thought that if they had a great creative idea, everything would be fine. But in today’s environment, you must tell your creative team exactly what the market needs; what qualities, what price points, with sleeves or without. Not because I like it or not, but because Neiman Marcus needs it.”

In a sign that he means what he says, Sälzer shifted the batting order last month between Escada’s designers and brand managers. Escada and Escada Sport brand managers Bettina Hammerl and Ilka Bennwitz  now direct the two respective design departments. Escada creative director Damiano Biella was initially sidelined as a consultant and has since left the house. Daniel Wingate, a member of Biella’s team, now heads the Escada design staff, while Jeffery Kong heads up Escada Sport’s design team. The goal, according to Sälzer, is to more clearly differentiate the two collections.

Another strategy to address current weaknesses calls for a “more comprehensive, attractive and high-end range” in all product groups. “I very much believe in categories. You need a total collection, of course,” Sälzer said, “but in knitwear, for example, I have to be as strong as the best knitwear manufacturer around. I have to think of it as a complete collection, and it starts from an innovative supplier base. We lost a lot of ground there, but we have already changed a lot.”

He said the fall Escada collection had received a positive reception from wholesale customers. That does not rule out further improvements, but unlike his predecessors, Sälzer doesn’t intend to go the youth route, especially for the Escada main collection.

Nor is the plan to diversify too widely into accessories. “Of course, we offer shoes and bags. Accessories are about 8 percent of our business,” he noted. “But you can’t fix the core business via accessories. Our heritage is apparel, and if we’re successful there, we can then be successful with accessories.”

A new design of Escada brand stores, meanwhile, has already born fruit, Sälzer reported. “All the renovated doors, especially in the States, have shown a big increase,” he said.

Escada’s own retail network of 86 freestanding stores (plus 96 shop-in-shops) generates about 45 percent of sales, but Sälzer sees room for improvement in the brand’s wholesale business. “I feel multibrand stores are coming back, and I’ve always been wholesale-driven. You can really see the success of a brand in a competitive environment.”

Sälzer said he foresees a shakeout in the market “of all extraneous things. I believe a lot in focusing on core competence, and not branding all over the place, opening hotels, being an art specialist.…The market will become more realistic,” he said. And pricing, even on the luxury level, will no longer be a free-for-all. “It’s not that people don’t have the money, but it’s not cool anymore to spend on something where you can’t explain the value,” he said.

The ceo sees Escada and Escada Sport positioned in the middle of each respective market, and prices for the Escada main line have come down somewhat, though he wouldn’t specify how much. “We’re definitely keeping the quality, but as part of a competitive position, the focus is always to have a volume-driven price point and a value for money product,” he said.

The key to it all is more professional sourcing, he said. “We can now manage the collection item per item much more carefully.”