The first of 2014 will be aimed at economic recovery. 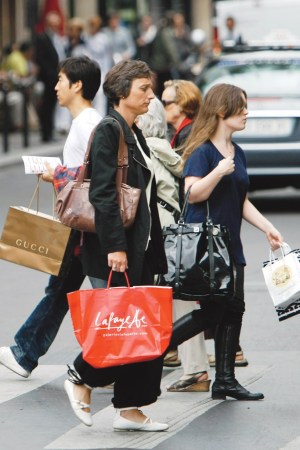 The RealReal Returns to GMV Growth

LONDON — Europe’s economy may be set to pick up next year — Spain, one of the region’s most troubled countries, has just crawled out of recession — and consumer sentiment across the continent appears to be improving. But if retail and economic experts had one piece of advice for executives doing business in Europe in the first half of 2014, it would be: “Curb your enthusiasm.”

Mario Draghi, president of the European Central Bank, said as much in September: “I am very, very cautious about the recovery. I can’t share enthusiasm. It is just the beginning. Let’s see. These shoots are still very, very green.”

According to the International Monetary Fund, the euro area is expected to pull out of recession gradually, with growth reaching 1 percent in 2014. In its latest economic forecast, the European Commission said real gross domestic product growth is projected to “gain traction” in 2014; however, domestic demand will be constrained.

“In the short run, private investment and consumption are…being held back by uncertainty about the economic outlook, while the weakness of the labor market will continue to weigh on domestic demand going forward,” the EC report said.

Consumers are still carrying serious baggage from the prolonged, Europe-wide recession, while unemployment remains at record high levels — it was 12.2 percent in September. And no one has forgotten the all-too-recent dramas surrounding the single currency, namely the sovereign debt crises in the region.

“Consumer confidence has been improving in the second and third quarters of 2013, and looks likely to continue to do so. However, it remains weak overall,” said Sarah Boumphrey, head of countries and consumers research at Euromonitor International.

“In the first half of next year, consumption is likely to remain weak too — unemployment is high, and disposable incomes are stagnant,” Boumphrey said. “Until the recovery strengthens and unemployment begins to fall, consumption is unlikely to recover. So, while the recovery is welcome news, it is unlikely to translate to significantly stronger spending growth in the short term.”

Nick Hood, a risk analyst at Company Watch, which monitors the health of a variety of businesses worldwide, believes 2014 may well be a year of transition for consumers.

“It could be the year when consumers emerge, blinking, from the recessionary bunker, thinking that maybe it’s time to start enjoying themselves again,” said Hood.

However, he added, “Consumer spending will be constrained, and growth in retail spend will be modest. I can’t see an exciting six months for retail,” he said, referring to the first half of next year.

Inflation is another consideration — in the euro zone, it fell to 0.7 in October, the lowest rate since February 2010, due to a drop in energy costs. The bigger inflation picture is complex.

“Inflationary pressures remain weak, which is good news for consumers’ wallets,” said Boumphrey of Euromonitor. “However, within this overall benign picture, food prices have seen stronger increases, and this does put pressure on discretionary spending, particularly as income growth remains weak and private debt high in many countries. It means that households have limited ability or desire to borrow to fund discretionary spending.”

Much of the projected growth in Europe, modest as it may be, will come from luxury customers, Millennials, Asia and the Middle East. According to the latest Consensus Study by Altagamma, the association of high-end Italian firms, all luxury product categories will notch an uptick in sales next year.

Apparel is forecast to gain 5 percent, jewelry and watches 6 percent, shoes and accessories 7 percent, and fragrances and cosmetics 4 percent. Geographically, Asia and the Middle East are set to notch growth of 10 percent each next year.

Meanwhile, according to Euromonitor’s latest Global Consumer Trends Survey, about 10 percent of European consumers surveyed plan to increase their spending, while most plan to maintain and 40 percent plan to decrease. For the survey, Euromonitor polled some 16,300 Internet-connected consumers ranging in age from 15 to 60 and older, living in Brazil, China, France, Germany, India, Japan, Russia, the U.K. and the U.S.

Eileen Bevis, survey manager at Euromonitor, said across France, Germany and the U.K., Millennials are the most likely demographic to say they plan to increase spending overall, and on product categories such as travel and clothing.

“As their job situations improve, they want to increase their quality of life and pad their savings accounts, though some are comfortable using credit cards to cover any budget gaps,” she said. “Clothing, entertainment and travel show the most potential to elicit spending increases from Millennials.”

Hood of Company Watch said while he does not foresee a new round of shop closures on the high streets of Europe, retailers will not have an easy time capturing the bits and pieces of consumption.

“I don’t see scads of casualties on the high street, and I don’t expect many surprises,” he said. “We had the clearing of the forest in 2012-13. There is stability in the euro zone, Spain is out of recession and the Irish construction sector is growing, something that we have not seen for a while.”

Luxury, he said, is relatively insulated, adding, “It always does well among those who can still afford it, and it remains hugely aspirational. Young fashion retailers, on the other hand, need to be right on the money with their customer experience and product. The customers will spend, but only if those elements are right.”