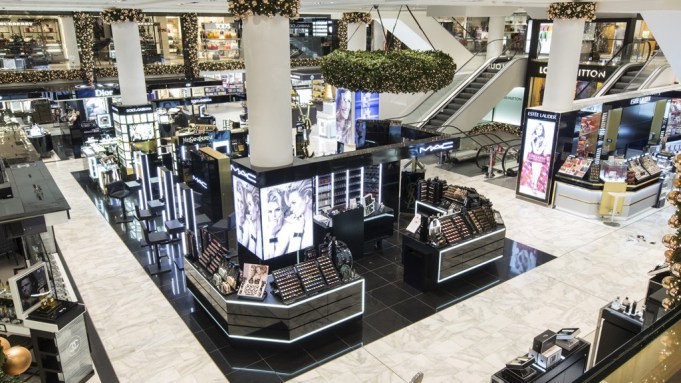 PARIS — ’Tis the season to be jolly.

That’s the general sentiment of the European beauty retailers queried about their business in the run-up to the end-of-year holidays.

“With growth of 6 percent compared with 2011, the Théâtre de la Beauté will realize a very beautiful 2012,” said Marie-Françoise Stouls, director for the perfumery department of that name at Paris’ Le Bon Marché department store.

Meanwhile, beauty sales at La Rinascente are up approximately 4 percent versus 2011, and at its Milan flagship in Piazza del Duomo, they have risen almost by double digits, according to the retailer’s head of beauty and children’s wear, Cinzia Baldelli.

“With the market slowdown, we can consider ourselves more than satisfied with these results,” she said.

Of course, fragrances and gift sets — traditional present picks — remain strong sellers this season. Retailers also mentioned categories such as nail polish and electrical beauty devices as important. For the most part, the hottest products and brands differed not only from country to country, but even on a door-by-door basis within the same city.

And discounting is on the rise. On London’s Oxford Street, for instance, House of Fraser is running a promotion involving 10 percent off all fragrances. Debenhams is also reducing prices by 10 percent for every scent brand, save for Chanel. While John Lewis, though not overtly discounting, has a long-standing price-match policy for consumers who can prove they found products cheaper elsewhere.

Despite the aggressive high-street discounting, Selfridges’ beauty business will see another good year, said the department store’s head of beauty, Jayne Demuro. Exclusives have been among the successes there, such as Lancôme’s Advent calendar that sold out within a week for the fourth year running, and a Tom Ford vanity case selling for 1,000 pounds, or $1,622 at current exchange.

In keeping with the storewide theme “A Christmas Like No Other,” the St. Tropez brand created for Selfridges the Tan Like No Other product.

Additional robust categories for the retailer are niche fragrances and nails. Selfridges claims to be the only store to stock Azature, billed to be the world’s most expensive nail color, priced at 160,000 pounds, or $260,476.

At Space NK, there’s been a recent uptick in demand for electrical beauty appliances, particularly the Philips RéAura at-home laser-treatment tool, according to Tom Macknay, the retailer’s finance director. Other top sellers are gift sets and brands such as Eve Lom, Beautannia, Laura Mercier, Dyptique and Space NK’s own fragrance label, Laughter.

Over in Germany, Galeries Lafayette Berlin is expected to close the year slightly up, according to Candemir Ergen, buyer and head of its beauty department. He attributed some of the gains to the recent redesign of parts of the store, including the beauty department, which added spacious Kiehl’s and Bobbi Brown counters, as well as an enhanced fragrance lineup, including SoOud, Byredo and Blood Concept, among other niche brands.

Some labels have been pre-launching products in the door, such as Lancôme with La vie est belle fragrance and Visionnaire skin care.

“These prelaunch products were an instant success for us,” said Ergen.

Meanwhile, Douglas Perfumeries is cautiously optimistic that this year’s business will be boosted by a fruitful Christmas season, a company spokesman said, adding patience is key.

“Consumers tend to buy their gifts later and later, and this year even Christmas Eve is a normal weekday, with opened stores,” he noted.

Fragrance is currently the hottest category at Douglas. In November, its top-selling scents were Thierry Mugler’s Alien and Jean Paul Gaultier’s Le Male. The skin-care leader was Clinique’s Even Better Eyes Dark Circle Corrector and, in makeup, the retailer’s own J.S. Douglas Söhne Vitamin and Shea Oil powder spray for skin and hair was the biggest hit.

The color segment is going strong, too. For nails, Stouls cited the popularity of the Kure Bazaar and Diorific polishes. In makeup, the limited-edition Shu Uemura line created by Karl Lagerfeld and Clinique’s Chubby Sticks are among the winners.

La Petite Robe Noire was “the most incredible launch,” agreed Charlotte Tasset, Printemps department store’s chief merchandising officer for beauty, child and lingerie. She lauded the entire project — from its packaging to its coffrets — and said it has been successful with a wide age demographic.

“The cartoon speaks to everyone,” she continued, referring to the fragrance’s animated advertising campaign.

This month in Printemps, La Petite Robe Noire is outpacing even Chanel No.5.

Tasset reasoned fragrance is the best-selling category at the department store during this holiday season, since it is highly giftable and makes people dream.