Brioni, IT Holding, and Lanvin are among the high-profile firms said to be seeking minority partners.

By Miles Socha and Andrew Roberts on December 31, 2008
View Slideshow 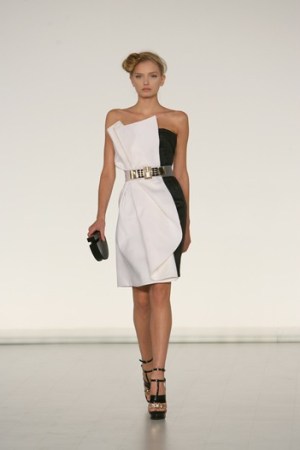 The latest chapter in fashion’s topsy-turvy acquisitions story could be titled “Minority Report.”

This story first appeared in the December 31, 2008 issue of WWD. Subscribe Today.

With valuations heading south — and bank financing scarce — minority stakes are becoming newly de rigueur with private equity and family-controlled funds, which are still sitting on cash piles and hunting for deals.

“Minority investments will be a bigger part of the deals we’ll be seeing in 2009,” said Ariel Ohana, partner at Paris-based investment banking firm Ohana & Co. “Most of the funds we’re working with tell us that’s what they’re looking for.”

There seems to be no shortage of willing sellers these days, either, with Brioni, IT Holding, de Grisogono, Mariella Burani Fashion Group and Lanvin among the high-profile firms said to be seeking minority partners. Tory Burch also revealed plans earlier this fall to seek a minority investor, but in recent weeks the designer has soft-pedaled the plan.

Fashion companies are either looking to take out burdensome debt, fund expansion of their retail networks or provide liquidity to a part of their investor base that needs cash, said Pierre Mallevays, founder and managing partner of Savigny Partners, a luxury goods advisory and mergers and acquisitions firm in London.

He noted that the economic crisis is having an indirect, albeit potent, impact in cases where “this is to repay debt where lenders are keen to get their money back and cash flow is suffering from the current environment, creating a double whammy effect.”

However, observers agreed that investors are keen to consider minority stakes in growing and healthy companies, rather than distressed ones without hope of a turnaround.

Mallevays also noted that “family office-type investors” — which act like professional funds, but with a family fortune — are likely to be key victors in getting minority stakes since they “can take a long-term view and are not necessarily constrained with an exit strategy.”

Given the financial crisis, most observers don’t expect many deals to be consummated in the near term, especially given the poor state of the M&A market currently. A Thomson Reuters study earlier this month found that the value of canceled M&A deals in the fourth quarter was greater than the completed ones. Furthermore, the survey found that announced M&A activity up to early December was 27 percent below that of last year.

That trend is expected to continue into next year, with the overall number of transactions likely to shrink, but with a bigger proportion of minority stakes, Ohana predicted. This contrasts with the past two years, when private equity players were behind a flurry of leveraged buyouts of majority stakes.

“We’ll be seeing less majority deals backed by financial investors because there’s a shortage of acquisition financing from the bank,” Ohana explained. “Those funds still have the equity, but they no longer have access to debt, so either they do nothing or they start doing other deals that are not leveraged.”

Jean Caillaud, partner at Paris-based fund N.I. Partners, said selling a minority stake is one of the few ways for companies to get financing today, with some positive upside.

From the seller’s point of view, there is no need to change the management, and there’s the added benefit of having “evolved professions” available to give input, he noted.

As for the buyer, “it can be very attractive because there’s less risk,” said Kim Vernon, president and ceo of Vernon Co., a New York-based brand consultancy that interfaces with investors. “They’re not necessarily responsible for having an operational position.”

On the sellers’ side, taking on a minority partner is an avenue to funding retail expansion, sharing risk with another party and cashing out without giving up control, executives agreed.

Investment professionals said strategic buyers, who recently have been getting back into the acquisitions game, are likely to take a pass on this trend, however.

Strategic players rarely take minority stakes, with some notable exceptions being Hermès International’s 45 percent stake in Jean Paul Gaultier and Compagnie Financière Richemont’s minority stake in online retailer Net-a-porter. Ohana noted that there are other reasons firms might agree to buy a minority rather than full control: because the company wishes to try out a new activity with no plans to integrate, or because it invests in a company where there’s a “conflict situation” that might put it in a position to obtain control at some point in the future.

But Caillaud asserted that minority investments by strategic buyers are less likely than in the past because multibrand conglomerates are apt to “keep their available financing for things they control.”

For investors, the fact that earnings multiples are deflated — down by as much as half, in some cases — in comparison with a few years ago means the market is ripe with cut price opportunities.

Caillaud said valuations are coming down, but it’s difficult to know by how much, since “there’s been few transactions recent enough to have been negotiated pre-summer,” ahead of the financial crisis.

Ohana said firms contemplating a majority deal before the crisis now might downscale to a minority sale, given lower valuations.

For companies, which are being squeezed by diminishing revenues and increasingly disproportionate debt, selling a minority stake makes a lot of sense.

“[In this situation] you have to sell some of your assets to cure your debt or find a new partner that can balance the situation,” Intesa Sanpaolo analyst Gian Luca Pacini told WWD.

Antichi Pellettieri SpA, part of Mariella Burani Fashion Group SpA, sold 49 percent of its bags division to private equity firm 3i in June to raise 118 million euros, or $150.3 million, in cash. The company is in line to be debt free this year and cash positive next year, after net debts of approximately 65 million euros, or $89.1 million, in 2007.

Mariella Burani also has been in contact with investors from the Middle East regarding the sale of a minority holding. The Italian company’s ceo, Giovanni Burani, said he had received “many proposals, but it is still early.”

As reported, IT Holding SpA chairman and ceo Tonino Perna is in discussions to sell a minority interest in the fashion company’s parent company, PA Investments SA, to an investor fronted by Hong Kong businessman Billy Ngok. Perna is hoping to ease the group’s net indebtedness and open up the Asian market.

Last week, Moody’s Investors Service and Standard & Poor’s downgraded IT Holding’s credit rating for the second time in as many months after the group, which owns the Gianfranco Ferré, Malo and Extè brands and operates under license the Just Cavalli, Costume National C’N’C and Galliano labels, asked lender Intesa Sanpaolo to again postpone, to April 18 from Dec. 22, a 9.4 million euro, or $13.2 million, tranche payment on its bank loan originally due Oct. 30.

Despite the negative outlook the pressure is expected to force IT Holding to find an investor, mainly due to the development potential of the brands in its portfolio. At what price, though, remains to be seen.

Former Valentino Fashion Group SpA chairman Antonio Favrin, who sits on Safilo’s board, bought 4.8 million shares in Safilo, or 2 percent of its capital, in October, prompting speculation that he could begin building a minority stake. At the time, Favrin told an Italian newspaper he had no interest in upping his stake, nor did he have hostile intentions. However, privately, he is believed to think otherwise.

The Tabacchi family, which owns Safilo, controls around 40 percent of the eyewear company, via Only 3T Holding.

Safilo’s balance sheet is under severe pressure following a 63 percent drop in earnings in the first nine months of this year and hefty net debts, which Deutsche Bank has forecast could reach 580 million euros, or $731.2 million, come yearend — nearly 4.6 times earnings before interest, taxes, depreciation and amortization. Only 3T is also burdened with around 300 million euros in debt.

After issuing its second profit warning in as many quarters this month, Safilo, which has licenses with Giorgio Armani, Dior, Gucci and Valentino, among others, has forecast a 2 percent drop in revenues from 4 percent growth and a net income target of 1 percent of sales, from 3 to 3.5 percent.

Italy’s Brioni said last month that it was looking for a partner to take a 20 to 25 percent holding and had tapped BNP Paribas as its adviser. Sources said it was easy to understand why Brioni would want to sell the stake — to unload the cost of buying out former ceo Umberto Angeloni in 2006 and finance expansion — but it was more difficult to understand from an investor standpoint.

“Two years ago there was a big appetite to invest in luxury. Now it is completely different,” sources said.

The downturn in luxury creates a major hurdle for fashion firms aiming to sell a minority shareholding. Talks between Lanvin and a fund linked to the ruling family of Qatar regarding the sale of a 40 percent stake, valued at around 80 million euros, or $101 million, have stalled, according to market sources.

Lanvin-owner Shaw-Lan Wang, who bought Lanvin from L’Oréal in 2003, has been seeking a capital increase in return for a minority stake to speed growth of the French fashion house, which is underdeveloped versus its competitors in terms of product categories and retail expansion. She since has lost her appetite to sell, though, according to sources.

Sources said Lanvin was “a very attractive target,” despite not being very profitable, largely because of its acclaimed designer, Alber Elbaz. However, until Wang changes her mind, the French label is “unavailable” because it is “solidly held,” they said.

Of course, the major question facing possible sellers and potential buyers is the recession. As European and U.S. retailers come off one of the worst holiday selling periods in decades and even luxury firms begin to feel the economy’s bite, the downturn could force more firms to look for investors. It also could further dry up credit, however, making it even more difficult to complete deals.

PricewaterhouseCoopers recently issued an M&A outlook for next year that stated the market will be “fueled by necessity.” Robert Filek, a partner in the firm’s Transaction Services group, said more and more troubled firms, especially in the U.S., will look to align themselves with stronger partners to survive.

In the end, though, Transaction Services group partner Greg Peterson stressed: “Private equity players will be challenged to find new and innovative ways to put their money to work and to find deal mechanisms that can drive the kinds of returns their limited partners expect. Historically, it has been during a downturn when strategic buyers and private equity firms have their best buying opportunities, yielding the best returns. The key will be the availability of financing.”