The European retail scene has been as chilly as its spring weather, hit by high unemployment, political uncertainty and a strong currency.

By Robert Murphy and Melissa Drier on May 26, 2005
View Slideshow 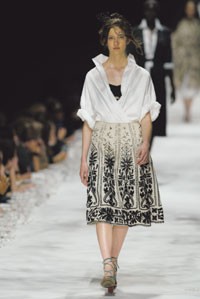 PARIS — The European retail scene has been as chilly as its spring weather.

High unemployment, political uncertainty and a strong currency are all contributing to one of the worst selling seasons in Europe in a decade, with little signs of an upturn ahead. And while executives said luxury continues to sputter on, sales are much slower than hoped, as tourists remain deterred by the high value of the euro against other currencies, particularly the dollar.

The poor retail scene in Europe contrasts with that in the U.S., which has seen a relatively buoyant spring despite spiraling gas prices and cooler-than-normal temperatures in the Northeast. Same-store sales in April rose 3.1 percent in department stores, 3.9 percent in specialty stores and 0.2 percent at mass retailers, which have been most affected by higher fuel prices.

Poor consumer demand in Europe stems generally from the weak economies in France, Germany and Italy, observers said. “If only there were more economic certainty,” complained one Paris department store executive, who asked not to be named.

But the dull retail environment is being exacerbated by political turmoil related to upcoming referendums on a European constitution, with votes in France on Sunday and in the Netherlands on the following Wednesday. In addition, German Chancellor Gerhard Schroeder surprised politicians by calling an early general election for September.

In France, sales of women’s ready-to-wear dropped 3 percent in April, according to the Institut Francaise de la Mode. Overall, sales of clothing, including men’s, women’s and children’s, have declined 2.6 percent since the beginning of the year.

Nonetheless, there are pockets of luster. Though less robust than hoped, sales at French department stores have improved slightly so far this year, up 2.7 percent. Suffering more are the discount-oriented hypermarkets and supermarkets.

German apparel retailers remain under pressure as they enter their 10th year of falling sales. The country’s economy shows no signs of improvement. The weak economy and political turmoil, plus rising unemployment figures and cuts in social benefits, have made German consumers more nervous, insecure and tight-pocketed than ever.

Karstadt, the country’s largest department store group, is in the midst of a massive restructuring program that includes the sale of 77 smaller branches and the divestment of its specialty store chains. First-quarter sales at Karstadt fell 6.8 percent, while sales at the Kaufhof department store chain were down 4.3 percent for the quarter. Specialty stores report divergent results, but the mood is anything but up.

In the U.K., retail sales last month fell at their largest pace since 1992, according to the Confederation of British Industry, with 46 percent of retailers reporting that sales declined in April. Marks & Spencer Group plc this week reported another set of weak results and said the current year will be difficult. Meanwhile, even Burberry, which has been one of the stars of the British fashion scene, on Tuesday expressed caution about the outlook for the current fiscal year, saying there had been weak demand for its spring collections especially in the U.K., Spain and the U.S.

Merchants are also lamenting a sluggish market in Italy as consumers grapple with lower spending power and inflation. Since the conversion to the euro in 2002, Italians have seen price hikes on a range of goods from vegetables to bus tickets. But higher-end luxury items are selling more swiftly as new tourists from Russia and Asia descend on Italy.

The spending crunch has hit mass-market players the hardest, although some are managing to hold their positions or eke out modest growth. Benetton, which counts Italy as its biggest market, saw flat first-quarter sales. Smaller rival Stefanel, also heavily dependent on the European market, saw its first-quarter sales rise 1.7 percent.

Vincenzo Donvito, president of Italian consumer rights group Aduc, said shoppers are increasingly price-sensitive and concentrating their purchases during sale periods. Under Italian law, retailers can discount only twice a year, after Christmas in January and again in summer. It is true that many retailers dodge the rule and inconspicuously mark down merchandise at whim.

“Everyone who needs [to buy clothes] waits until the sale periods because the savings are significant,” he said.

As for the tourist-dependent luxury market, the signs are more encouraging for Italy. Overall, non-European tourists spent 6.2 percent more on luxury goods in the first five months of this year than in the same period of 2004, according to data from tax refund agency Global Refund.

Although Japanese tourists spent 6.1 percent less and American visitors spent 10.1 percent less in Italy, tourists from places like Russia, Taiwan, Hong Kong and South Korea shopped more, the research said. Russian tourists spent 29.5 percent more than they did a year ago. They are now the second-most important tourist group in terms of spending power behind the Japanese.

Cedric Charbit, general merchandise manager for women’s at Printemps, said the store had increased sales of women’s rtw by 8 percent in its main Boulevard Haussmann unit since the beginning of the year. “I consider it’s been a good season so far,” he said. “That’s not to say it’s easy going.”

Meanwhile, the store remains focused on creating a “retail-tainment” atmosphere by organizing periodic exhibits. An exhibit devoted to photographer Martin Parr opened this month, and in the fall the store will do one about New York.

Merle said business this spring was “on line,” but “not bonkers.” She said fun and poppy fashion accessories, but not luxury accessories, have been selling best. Like other retailers, she said beauty sales were “struggling.”

Merle singled out brands such as Marc by Marc Jacobs and Zadig & Voltaire as strong in the juniors’ department. Other robust brands include, Marni, Miu Miu, Jil Sander, Lanvin and Rochas.

At Printemps, Charbit said the flop of the season has been trousers. “We can’t sell them,” he said. “We’re also not selling miniskirts.” Petticoat skirts are selling, whether long or short, as are blouses with volume. “Silhouettes too close to the body aren’t strong.”

Other winners, Charbit said, include “Las Vegas” style evening dresses, little jackets, and premium denim from the likes of Seven, Diesel and Dsquared. Bootleg jeans are “out,” he added, and have been replaced by straight-leg models from the likes of Acne. “The jeans have to be able to be tucked into boots,” he said.

In accessories, Paris retailers reported platform shoes or flat moccasins have been strong, as well as hippie style scarves from Balenciaga and Chloe and bracelets that can be stacked on the arm.

Similar brands are selling well elsewhere on the European continent.

Color continues to drive women’s rtw sales, retailers across Europe said. Antonia Giancinti, who owns the high-end Antonia store in Milan, said she isn’t selling black or dark colors. “People still want color,” she said. “They are going to have a hard time adjusting to all the black for fall.”

At Grey Flannel in Capri, manager Tiziana Cimmino said Chloe’s Paddington bag, and classic Balenciaga bags as well as T-shirts from Dirk Bikkembergs and Dsquared have been driving business.

— With contributions from Amanda Kaiser, Milan