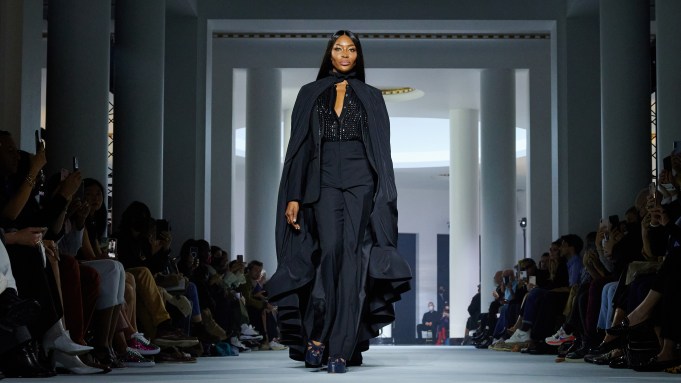 SHANGHAI — Lanvin Group is filing regulatory documents ahead of its IPO, revealing detailed financials for individual brands for the first time, WWD has learned.

The company said it achieved break-even in 2021 and is on track to reach profitability in 2024. Lanvin Group attributed the growth to strong performance at Lanvin and Wolford.

The Austrian knitwear supplier Wolford is the group’s biggest brand in terms of sales. Wolford’s revenue rose 15 percent to 109 million euros on a year-over-year basis in 2021, gaining the best EBITDA results in 2021 after adjusting for real estate sales, according to the company.

Joann Cheng, chairman and chief executive officer of Lanvin Group, said the business expects “2022 to be even better,” anticipating growth momentum by solidifying the European market while tapping deeper into the North American and Asian markets.

The company has 688 points of sale in the European market, 212 in the North American market and 234 in the Greater China market. Almost half of sales come from Europe, the Middle East and Africa, while 33 percent comes from North America, with 14 percent from Greater China.

This March, the five-year-old luxury company announced plans to list on the New York Stock Exchange by merging with a special purpose acquisition company backed by private equity firm Primavera Capital Acquisition Corp. Lanvin Group aims to gain a “pro forma enterprise value of $1.5 billion, with a combined pro forma equity value of up to $1.9 billion,” the company said at the time.

“I hope that Lanvin Group will become the first luxury company with headquarters in China that has a global reach,” Cheng said. “We want to be perceived as a global luxury group.”

“In the next three to five years, we are confident that we will achieve a compound growth rate of over 30 percent,” Cheng said. “The SPAC IPO is a step along the way to achieve that. For us, going public is more about building a healthy and unique ecosystem with our strategic investment partners.”

“We have a lot of low-hanging fruits in the North America and Greater China markets, where our income ratio is currently lower than industry average,” Cheng said. “So there is a clear growth path for us there, including increasing retail footprint in strategic locations.”

As for the China market, the company has plans to open more stores in first-tier cities’ premium shopping malls, increase the brands’ online presence, and focus on localization efforts to cater to the country’s younger customer base.

“Our business is global, but being a Chinese investor, we do have more advantage to facilitate projects with more of an Asian flavor,” said David Chan, executive president and co-chief operating officer of Lanvin Group.

In the U.S. market, Lanvin Group struck up a deal with Shopify this April to speed up e-commerce growth, aiming to increase online revenues from 15 percent to 25 percent in three to five years. Lanvin and Sergio Rossi will become the first two brands to transition onto the platform in the second half of this year.

Cheng said Lanvin, the group’s flagship brand with the biggest brand equity, will be the main focus of investment down the line.

The group also seeks to acquire brands “in a complimentary category.”

“Acquiring a new brand will help us become a more diverse group, but the group’s growth over the next five years will largely come from the organic growth of our existing brands,” Cheng said. “At the end of the day, acquiring the right brand also comes down to timing and luck.”