Company shares closed down nearly 26 percent Thursday as a result.

An Express store during this year's Black Friday sales.

Express continues to struggle amid the pandemic.

The retailer revealed quarterly earnings Thursday before the market opened, widening its losses by another $90 million and revealing a 10 percent staff reduction in its Columbus, Ohio, corporate offices. Shares of Express closed down 25.95 percent Thursday to $1.17 a piece as a result.

“In the third quarter, we continued to advance the Expressway Forward strategy while taking decisive and appropriate action to manage our liquidity,” Baxter said in a statement. “Our e-commerce business continues to gain momentum and the new fashion product that fully reflects the ‘Express Edit’ viewpoint is outpacing the balance of our assortment.”

Those fashion edits include an attempt to tap into the growing men’s wear market. In September, Express launched its Men’s Style Trial Service. Baxter has also previously said Express is returning to its fashion-driven roots with a greater selection of men’s and women’s jeans. In addition, Express partnered with designer and television personality Tan France during New York Fashion Week for the Dream Big Project.

“Our strategy is the right one, the changes to our product presentation and brand positioning are the right ones and our financial actions are the right ones,” Baxter said. “As we move into 2021, we remain focused on delivering our long-term goal of a mid-single-digit operating margin and profitable growth.

“Our streamlined go-to-market process and the implementation of our new inventory planning and management systems have already improved our efficiency and enabled us to operate with greater speed and agility,” Baxter added. “Further reducing our workforce was a difficult decision, but was appropriate to calibrate the organization to the capabilities of this new operating model.”

Bright spots in the quarter included the company’s e-commerce business. Demand for services such as buy-online-pick-up-in-stores grew six-fold during the quarter, with 18 percent of those transactions resulting in increased conversion rates. The retailer plans on rolling out a new e-commerce strategy in early 2021.

By category, Express had success in sweaters, denim, loungewear and men’s knit tops during the quarter. New customers in men’s top business grew by more than 100 percent online, compared with a year ago, with noticeable strength in men’s polos, which Baxter called “the new work shirt.” 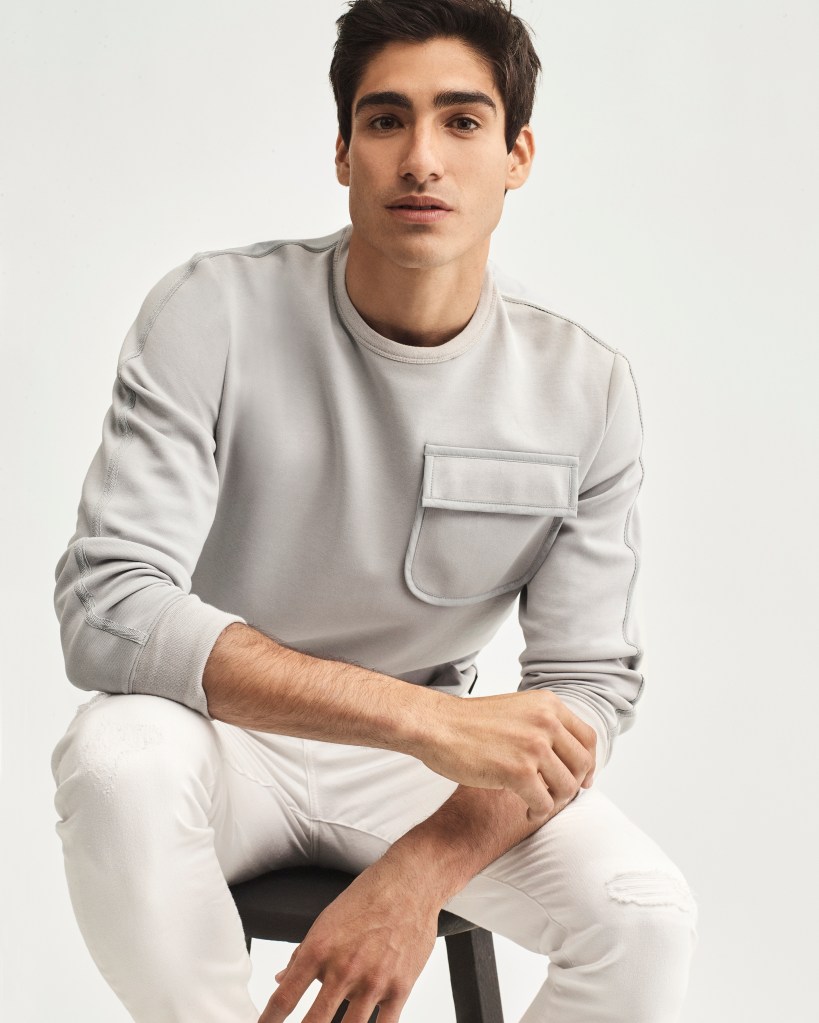 Men’s tops did well during the most recent quarter at Express.  Courtesy Photo

“Casual is clearly performing better right now than our historically big categories of more dressed up product,” Baxter said on Thursday morning’s conference call with analysts. “[But] we’ve had weeks where we were actually posting positive comps in denim. It’s tough to offset what is happening in stores right now given the high penetration in stores to our business. But our denim customer has tremendous lifetime value over a non-denim customer, visiting twice as frequently and spending twice as much on an annual basis.

“Our customers are absolutely responding to the fashion product in a way that, as I said, has exceeded our expectations,” Baxter added.

The company is not providing forward-looking guidance, but anticipates the job cuts will help free up $13 million next year. In addition, Express is expecting a $95 million cash tax benefit in 2021’s second quarter as part of the CARES Act and has secured $25 million in rent abatements to date.

Still, the return on investments have yet to take shape. And store closures and declining mall traffic — which began pre-pandemic — aren’t helping much.

For the three-month period ending Oct. 31, total company revenues were $322 million, down from $488 million the same time last year. The company lost more than $90 million in the quarter. That’s on top of a $107 million loss last quarter and more than the $3.1 million in losses in last year’s third quarter.

Headwinds include the company’s extensive store fleet, many of which are located in malls, occasionwear and increased promotions.

“Overall for Q3, the promotional environment was pretty intense and it was higher than initially anticipated,” Perry Pericleous, the company’s chief financial officer, said on the call.

“Fleet rationalization is about the number of stores; fleet optimization, which is now our focus, is about where the store should be, what type they should be and what role they will play in our customers lives,” Baxter said. “We use data to make thoughtful decisions and if we decide to close more stores that will also be the result of thoughtful data-based decisions.”

Express ended the quarter with $107 million in cash and cash equivalents, $165 million in long-term debt and 592 stores in the U.S.

Shares of Express are down more than 70 percent year-over-year.