Buyers and vendors setting their itineraries for the second half of the year have positive and negative market indicators to consider.

By Kristi Ellis and Arthur Friedman on June 20, 2012
View Slideshow 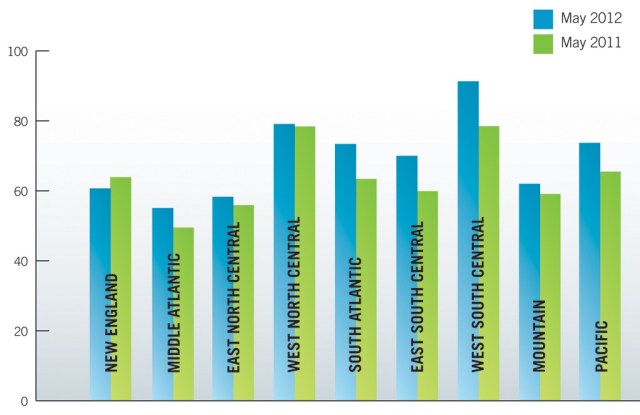 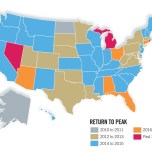 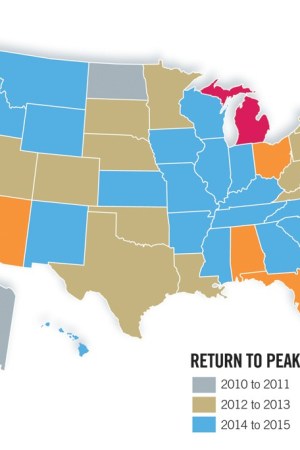 As retailers and vendors head out to buy and sell their wares at trade shows and regional markets across the country in the coming weeks and months, they do so with some positive and negative indicators.

This story first appeared in the June 20, 2012 issue of WWD. Subscribe Today.

The good news for the fashion industry is that the prices of raw materials, from cotton to gasoline, have dropped or stabilized and is expected to stay that way through the second half of the year. The bad news is that economists generally forecast the pace of economic growth will continue to moderate, which was underscored by signs of weaker growth in some leading indicators in May.

Last year’s near panic over historically high cotton prices, and concurrent hikes in synthetic fiber costs have been replaced by prices dropping back to long-term norms and expert predictions of near-term stability. Cotton Incorporated’s May Economic Report noted that cotton prices moved lower over the past month and fell sharply with the release of the U.S. Department of Agriculture’s May report. The July New York futures contract fell from 93 cents a pound in late April to below 82 cents a pound. The December 2012 contract, which is important since it reflects price expectations following the upcoming harvest, fell below 80 cents a pound, the report said. The A Index, which had been holding to a tight range around $1 a pound, dropped below 95 cents to its lowest values of the 2012 calendar year.

“A variety of reasons could be behind the decreases, including India’s elimination of restrictions on fiber exports, rain in West Texas and less positive economic data in the U.S. and Europe, all of which suggest loosening fundamentals,” Cotton Inc. said.

The USDA report indicated that supplies will continue to be plentiful in 2012-13. The USDA expects ending stocks to swell another 6.9 million bales to 73.7 million bales. This record volume of ending stocks is expected to produce a record stocks-to-use ratio, with a 67.1 percent rise.

Cotton Inc. said recent increases in world cotton supply can be seen as a product of market forces resulting from the spike in prices that occurred in 2010-11. Prices peaked last spring in excess of $2 a pound, coincident with planting decisions for Northern Hemisphere countries. This led to both record cotton acreage and a record cotton harvest in the 2011-12 crop year. High prices also caused a reduction in demand. In 2012-13, the effects of 2010-11 prices on the global supply and demand situation are expected to begin to diminish. World production is expected to decline 5.2 percent and global economic growth and recovery of market share relative to synthetic fibers are expected to bring world cotton consumption 3.3 percent higher.

At the country level, the largest production decreases are forecast to take place in China, India and Brazil. Among major producers, only the U.S. is expected to harvest more cotton in 2012-13, although U.S. acreage is expected to decrease, and the forecast increase in production is a result of expected improvement in growing conditions.

The report noted that “uncertainty remains a feature of the cotton market.”

Polyester prices also peaked last spring as demand increased and supply was pressured. Polyester staple reached 99.5 cents a pound and polyester filament topped out at 88 cents a pound. Prices have since backed off to 83.5 cents a pound for staple and 72.5 percent for filament.

Bill Jasper, chairman and chief executive officer of Unifi Inc., in a conference call discussing third-quarter results for the Greensboro, N.C.-based manufacturer of multifilament polyester and textured nylon yarns, said, “Polyester raw material prices at historic highs, a strong Brazilian real and high apparel supply-chain inventories and their destocking combined to make the first half of our 2012 fiscal year difficult. We did see an improving trend through the March quarter as all these factors improved and we have seen growth in regional shipments of U.S. apparel sales. We expect this positive trend to continue through the June quarter and into the next fiscal year 2013.”

Roger Berrier, the company’s president and chief operating officer, said, “The North and Central American region has stabilized in recent years and is expected to hold its share of synthetic apparel supply at approximately 18 percent into the foreseeable future.…We expect share growth from countries like Vietnam and Cambodia to come at the expense of China, which is expected to grow at a rate of approximately 5 percent for the year. While the region is holding share, the overall growth of global polyester remains at 3 to 4 percent, as apparel consumed in the U.S. continues to grow. To meet this increase, we added incremental capacity to our Central American operations to supply this growth opportunity.”

“Prices have had a fairly dramatic effect on wool growing,” said Rob Langtry, chief strategy and marketing officer for Australian Wool Innovation. “From an Australian point of view, from 200 million sheep in our paddock a decade ago, last year we dropped down to our lowest, which is about 69 million. We’re slowly seeing a bit of a turnaround with slowly growing confidence and we may get up 71 million to 72 million this year and that would be the first time we’ve grown in quiet some time.”

“But these are very uncertain economic times out there,” he said. “For us to think about any outlandish increases in our prices would be ridiculous. I think we’ll see a very steady growth in what our farmers get for the wool based on a steady increase in interest around the world.”

Meanwhile, the U.S. economic outlook remains unsteady. In the overall economy, employment rose a paltry 69,000 in May, well below economists’ expectations, and the unemployment rate edged up to 8.2 percent from 8.1 percent in April.

Consumer confidence also took a hit in May, declining for the third straight month to 64.9 percent, marking its biggest drop since October 2011. Consumer confidence is closely tied to the employment picture and as that outlook begins to weaken along with declining income growth, economists expect confidence and spending to continue to soften somewhat in the second half.

The decline in the stock market in recent weeks and turmoil in Europe are also impacting business confidence, leading to less expansion and hiring.

“I think there is a good deal of uncertainty up until the November [presidential] elections and, as a result, I would expect nothing more than modest growth for employment and modest growth for consumer spending,” said John Lonski, chief economist at Moody’s Capital Markets Group.

“It’s an uninspiring, lackluster outlook for household expenditures in general,” said Lonski. “It doesn’t mean we will have a recession, but my sense is that 4.5 percent growth in consumer spending falls short of what occurred during previous economic recoveries.”

Lonski said he believes payrolls will continue to grow in the second half, but at a slow pace.

“I don’t think there is any pressing need for businesses to add staff,” he said. “The risk aversion we see in the financial markets is also shared by business owners.”

Lonski said spending growth “will be there” in the second half, but “retailers will be making a mistake if they believe that there will be a surge in consumer spending that will be broadly distributed.”

“It is not the healthiest spending, but I wouldn’t say American consumers’ [balance sheets] are healthy in general — they have headwinds,” he said. “In order to make a tremendous impact on GDP or the unemployment rate, that number should be higher. What we are seeing in spending is that a number of people are waiting longer to buy new cars or are hanging on to durables a little more.”