New Guards is the licensee of Virgil Abloh’s Off-White brand, giving Farfetch a further footing into the streetwear market.

Luxury platform Farfetch has been shopping again, but that didn’t appear to do the trick for investors.

It was unclear if investors were fretting over Farfetch’s latest results that showed losses widened in the second quarter or if they took a dislike to news that it had acquired brand platform New Guards Group, the licensee of Virgil Abloh’s Off-White brand, among others, for $675 million in an equal mixture of cash and shares.

Whatever the reason, before the news of both, the company’s shares had closed up 5 percent to $18.25.

In an interview with WWD, José Neves, chief executive officer and co-chair of Farfetch, said: “I will not comment on stock prices. I never do. Our job is to remain focused on executing a very exciting strategy and opportunity.” 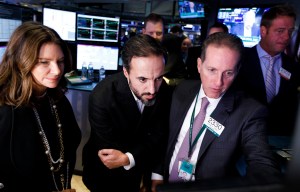 That opportunity is Milan-based New Guards, which has launched a number of global luxury fashion brands and gives Farfetch a further footing into the streetwear market. Farfetch listed Off-White, Marcelo Burlon County of Milan, Palm Angels, Ben Taverniti, Unravel Project, Heron Preston, Alanui and Kirin Peggy Gou as its brands, but did not state which ones New Guards had a majority stake in. It confirmed, however, that it did not own Off-White.

Not long after the news broke, Abloh offered further clarification on Off-White’s connection with New Guards.

“Off-White would like to clarify our ownership structure. Off-White LLC, which is controlled by Virgil Abloh, owns the trademark of our brand, and NGG is our exclusive licensee pursuant to a multiyear agreement,” he said in a statement. “The New Guards Group transaction with Farfetch will not affect Off-White’s day-to-day operations as the New Guards Group team will become part of Farfetch. We look forward to our ongoing work together.”

According to Farfetch, the New Guards acquisition provides the opportunity to develop and introduce new and highly attractive labels to its platform, along with exclusive capsule collections and collaborations.

A number of the New Guards portfolio brands were already present — though only via boutiques — on the Farfetch Marketplace, including Off-White, which is one of its top 10 most popular brands for Farfetch in terms of gross merchandise value.

Now Farfetch plans to help New Guards’ existing and future portfolio brands maximize their potential by opening new e-concessions on the Farfetch Marketplace, and will operate each brand’s own e-commerce site and digital platforms through its Farfetch platform solutions capabilities.

At the same time, Farfetch will leverage its existing technology, data and logistics infrastructure to tap into near-real-time supply and demand data to match New Guards’ production in a much quicker cycle. This “connected wholesale” model will create meaningful productivity gains by minimizing overstock and strengthening distribution, which should also reduce the need for markdowns, Farfetch said.

“The addition of New Guards’ brand platform brings a creative and industrial dimension to our suite of capabilities which, combined with our community of more than 650 boutiques, enables us to power and promote both new and existing creative names in the luxury industry to build the brands of the future,” Neves added in a statement.

Davide de Giglio, cofounder and ceo of New Guards Group, said: “We started New Guards Group because we had a vision to build a platform that could support the best creative talent in the world and build iconic brands. Creative visionaries need to be empowered with best-in-class design studios, industrial capabilities and global distribution channels. Farfetch has the technology, expertise and vision to take our business to the next level and unleash the talent of the future.”

The acquisition of New Guards comes after Farfetch picked up famed London fashion boutique Browns in 2015 and has also just launched on China’s JD.com’s platform through its acquisition of Top Life.

“We always said that this is about building the global platform for luxury. We always said that M&A would be part of our tool kit,” Neves told WWD. “I think it’s the result of our success and our execution as a platform that we’ve had absolutely world-class companies speaking to us and actually partnering with us.”

The latest acquisition news came as Farfetch released second-quarter results. Revenue increased by $62.6 million year-over-year from $146.7 million in the second quarter of 2018 to a record $209.3 million, representing growth of 42.7 percent. This beat Wall Street estimates for $200 million, according to FactSet data.

The increase was primarily driven by 52.8 percent growth in platform services revenue to $176.5 million. In-store revenue increased by 33.1 percent to $4.2 million.

While Farfetch has enjoyed a meteoric rise, it has yet to turn a profit. And while its gross merchandise value increased 44 percent over the year to a record $488.5 million, it has reduced its guidance for the third quarter.

Luca Solca, an analyst at Bernstein, said: “The business remains far from making a profit, while continuing to reduce GMV guidance (now 30 to 35 percent for [third-quarter earnings]). And this happens despite the recent acquisition of Top Life, which should provide tailwinds in the [second half of 2019] in China.”