The issue of chargebacks and vendor allowances is likely to remain a hot button this year. 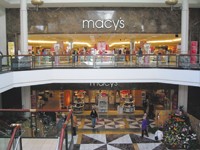 NEW YORK — The issue of chargebacks and vendor allowances is likely to remain a hot button this year now that Federated Department Stores Inc. is integrating its May Department Stores Co. acquisition and charging vendors a 5 percent “new store allowance.”

Sources said Federated held a logistics and operational meeting mid-April at which they laid out their plan for transitioning the May stores to Federated. Several vendor representatives who attended the meeting, and who requested anonymity, said Federated told attendees they were treating the newly converted May stores as “new doors.” What irked the vendors was the plan by Federated to exact a 5 percent “new store allowance” for the converted doors. About 400 May doors will be converted into Federated doors, making up about half of the total store count for the new post-merger Federated.

One attendee said the discounts are being applied to orders written months ago for the corresponding May stores. Since the application of the 5 percent is not for future orders, and past orders for goods were already priced out, vendors impacted by the 5 percent extraction can expect to see little or no margins on those orders.

A spokeswoman for Federated did not return phone calls for comment.

One Seventh Avenue apparel executive who has lived through several past retail mergers observed, “This is the first time I’ve seen it,” referring to Federated’s store allowance. The executive added that the way Federated is defining “new door is not the concept that most people” would understand, based on past industry practices.

Allan Ellinger, senior managing director at Marketing Management Group, explained that a “new store allowance” typically is sought by retailers when they are building out an empty store and are stocking the store from scratch. “Since the store is closed, it is not generating business. The allowance helps to defray some of the costs in starting up the store.”

In Ellinger’s opinion, the May stores are already in existence and operational, and all that Federated is doing is transitioning the stores to the Macy’s nameplate. “The other concern is that the 5 percent [allowance] doesn’t immunize the vendors from end-season markdown allowances, which means vendors are getting hit twice on the same goods.”

This story first appeared in the June 12, 2006 issue of WWD. Subscribe Today.

Jeffrey Knopman, principal at chargeback recovery firm Profit Solutions Group, observed, “The conversion of the May doors doesn’t fit the classification of a new door. It isn’t like Federated is stepping up and creating a new store. The physical plant is in existence. The only investment is taking down a nameplate and putting up a new one.”

Since many vendors affected by the allowance were already selling to both Federated and May, the changing of the nameplate doesn’t necessarily add new doors to the vendors’ business. In some cases, the closures of certain May doors may have even reduced the overall business for some vendors, Knopman noted.

Knopman views the 5 percent as “onerous,” but said there’s not much the vendor community can do. “The vendors can scream all they want, but it is really up to each vendor to see if they can negotiate with Federated. Other options are be prepared to pay or simply walk away from the business. In most cases, the vendors will pay the 5 percent. If they walk away, who else are they going to sell to?”

Markdowns, chargebacks and slotting fees have grown into a necessary part of doing business. Retailers say they need to employ such tactics to maintain their profits and keep a high level of operational efficiencies. Last year, the issue reached a boiling point following disclosures of improper markdown activity at Saks Inc.

At a seminar last month hosted by the law firm Phillips Nizer here at the Princeton Club called “Retailer/Vendor Relations: One Year After the Saks Disclosures,” Ellinger noted that, despite the lessons learned from Saks last year, “little may have changed.”

In March 2005, Saks Inc. said an internal investigation revealed “improper collections of vendor markdown allowances” and that the retailer would pay back, or otherwise compensate, certain unnamed vendors, in an amount to total $21.5 million. The impropriety occurred in the bridge areas of Saks Fifth Avenue. The company also said it was correcting $31.6 million in accounting errors related to leased departments in its stores. Saks added it would have to restate earnings from fiscal 1999 to the third quarter of fiscal 2004 as a result of the repayments and accounting errors on leased departments.

In August, after Saks completed its internal probe, the retailer said it will reimburse vendors for more than $48 million in improperly collected markdown allowances from 1996 to 2003. The company said the SFA division owed vendors $26 million for markdown allowances during the 1999 to 2003 fiscal years and that vendors will be paid interest at the rate of 7.25 percent annually, totaling $14 million.

The situation at Saks was thought to possibly “open a can of worms” in the industry and put more retailers and their margin and markdown money agreements on notice, and under the watchful eye of the Securities and Exchange Commission.

Several lawsuits were filed against Saks, one by Onward Kashi­yama USA before the disclosure by Saks in a New York state court. Onward Kashiyama sued for more than $9 million for “substantial deductions and credits which were not allowed under the terms of the agreement,” according to court papers.

The impropriety also led to an SEC probe, as well as one by the U.S. Attorney’s Office here. Both investigations are still ongoing.

Meanwhile, many vendors banded together and, through the assistance of Phillips Nizer, formed the Vendor Coalition for Equitable Retailer Practices. Their goal is to create a “better partnership” between vendors and retailers. At the Phillips Nizer event last month, Donald Kreindler, a partner at the law firm and one who has played a key role in the formation and development of VCERP, updated the attendees with information about six position statements issued by the coalition: margin support, retailer claims, payment terms and discounts, credits for returns, bulk orders and holds on payment.

Despite a desire for change generated by the Saks disclosures, Knopman said: “I haven’t seen change in the landscape regarding either sensitivity or reduction.” He explained that the chargebacks in some cases are more pronounced, and that he’s even seen some new tweaks effected by the retailers.

“One of the problems is that retailers are seeing the Saks situation in very narrow terms. Saks involved the lack of transparencies of gross margin obligations levied against vendors. It was about how they recorded those obligations. The other retailers are looking at themselves and believe that they are transparent in their numbers. Saks had nothing to do with compliance in terms of operational deductions, so the other retailers believe that they can continue to do what they want on compliance. This is why the retail community isn’t rattled yet,” Knopman concluded.