Firm has been entertaining options to divest both its Lucky Brand and Juicy Couture businesses, according to sources. 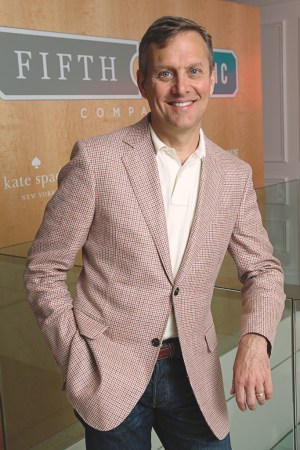 The fast-growing Kate Spade might soon have the house to herself.

Fifth & Pacific Cos. Inc. has been entertaining options to divest both its Lucky Brand and Juicy Couture businesses, according to sources, who described the process as informal but moving forward.

Private equity firms Sycamore Partners and TSG Consumer Partners are both said to be interested in Lucky. TSG is also understood to have met with William L. McComb, chief executive officer of Fifth & Pacific, on the matter. Other investors are considering a run at the denim brand, and that could make for a relatively active sale process.

Sources said at least one Asian player is said to be interested in Juicy, which has changed course several times and expects to spend this year rejiggering its business.

A spokeswoman for Fifth & Pacific said, “We do not comment on market speculation or rumors.” Spokesmen for Sycamore and TSG declined to comment.

Investors have previously encouraged the company to spin off Kate Spade so that the brand could get a stand-alone valuation and be compared more directly with other hot brands, such as Tory Burch and Michael Kors. Selling Juicy and Lucky would accomplish the same thing, allowing markets to zero in on Kate Spade’s prospects. (Fifth & Pacific also has a private-label jewelry business.)

McComb has long said he wanted to create “cleavable” businesses under the Fifth & Pacific umbrella.

“You see much higher multiples on companies that are freestanding monobrand global lifestyle and direct-to-consumer…companies that have those characteristics in this industry tend to have higher growth profiles and higher profit profiles,” he told WWD during a recent interview for Kate Spade’s 20th anniversary. “We wanted to build a company that had the ability to separately monetize these things.”

McComb said the investor interest in monetizing brands is only natural since he’s been calling that out as part of his strategy for years.

Counterintuitively, Fifth & Pacific might be worth more with fewer parts.

Kate Spade is not only on a growth trajectory with room to expand at home and abroad, but it is also a force in the highly profitable accessories space. Without Juicy or Lucky in tow, the brand has a clear growth story that is easily understood by Wall Street — which is on the hunt for the next Kors or Coach Inc.

Fifth & Pacific will highlight Kate Spade at an investor presentation on March 15. Lucky and Juicy are scheduled to get their own investor days later in the year.

Lucky’s business is gaining traction after a slump, and the brand is branching out, moving into handbags for fall and eyeing the international market. Juicy named Paul Blum ceo in December and is still trying to turn around operations.

Lucky to expected to post sales of at least $479 million this year while producing adjusted earnings before interest, taxes, depreciation and amortization of $50 million to $55 million, according to projections from Fifth & Pacific. Juicy’s sales are slated to fall slightly or come in flat at $499 million, while adjusted results range from a loss of $5 million to earnings of $5 million.

The company had net debt of $386 million as of Sept. 29, so selling Lucky and Juicy would leave Kate Spade either debt-free or with a pile of cash to fund its expansion.

Kate Spade’s sales are expected to grow by a percentage in the low teens this year to at least $522 million, with adjusted EBITDA of $130 million to $140 million.

“His cleavable brands will be cleaved,” said one financial source, referring to McComb. “He can either IPO Kate or sell those businesses. Those business have no business being public. Kate’s really ready for its unveiling as a public entity, and I guess those businesses are stable enough to contemplate a sale, which wasn’t the case.”

If the company did spin off Lucky and Juicy, observers expect Fifth & Pacific would change its name to Kate Spade and then make its run at fashion investment fame and glory.

That would mark a wholly new chapter for the company, which used to be called Liz Claiborne Inc. and put a generation of working women in pantsuits before becoming one of Seventh Avenue’s largest players with more than 30 brands and then trimming back.