Wall Street’s implosion has blown a hole in the One Franklin Project, with development plans for retail space and condos in the heart of the city. 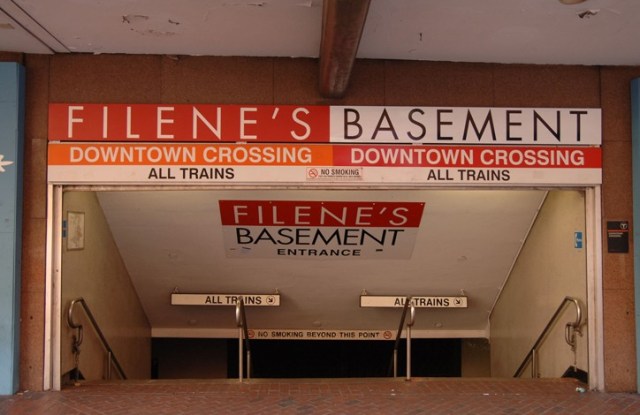 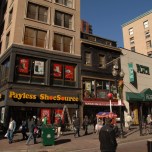 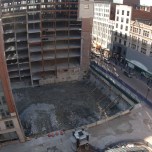 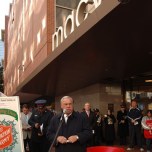 BOSTON — Wall Street’s implosion has blown a hole in the $700 million development of the former Filene’s site in the heart of the city.

This story first appeared in the November 13, 2008 issue of WWD. Subscribe Today.

The One Franklin project — retail, upscale condos and a hotel — was to anchor a revitalized Downtown Crossing, a district that 130,000 people pass through daily. But developers Vornado Realty Trust and Gale International are unable to meet financing goals and are suspending activity at the site, where a crater several stories deep has been excavated.

“It is a testament to how difficult it is to move forward with even the most solid of development projects,” in the current credit environment, said Gale International chief executive officer John B. Hynes 3rd. “For One Franklin, the retail is 75 percent leased, the office space is 25 percent committed and the 250-room, four-star hotel is contracted for sale.”

The Boston-based developer is said to have already invested at least $150 million in the project, which involves integrating two historic buildings into a 1.25 million-square-foot tower. New York-based Vornado was handling the retail deals and had signed on tenants such as Zara and others, sources close to the project said. Before the economy soured, developers fielded retail proposals totaling about 500,000 square feet for the 150,000 square feet planned.

“We remain committed to this project and to Mayor [Thomas M.] Menino’s vision to revitalize Downtown Crossing,” Hynes said.

The area is at the top of the Boston Common and adjacent to the Financial District. There are about 350 retailers, including Macy’s and H&M, 300 jewelers, discounters, street-cart vendors and about 6,000 residents, according to the Downtown Crossing Partnership, a neighborhood advocacy group.

“We’re plugging away at this issue,” Menino said of the decision to suspend work. “We would never allow Downtown Crossing to fail.…It’s too important to the vitality of the city.”

Unlike gentrification efforts pinned to a single project, Downtown Crossing is an area with solid underlying fundamentals. It draws Boston’s highest pedestrian numbers, commands rents comparable to luxury thoroughfare Newbury Street on prime blocks and has several developments financed and/or under way.

There are luxury condos to open in 2009, and a $200 million mixed-use tower set to break ground in 2010. Suffolk University and Emerson College continue to convert old buildings into dorms.

But the uncertainty surrounding One Franklin has taken a toll. Several storefronts sit empty and speckled with graffiti. There are growing concerns about loitering and petty crime.

“People have been cautious about signing new retail leases until One Franklin comes out of the ground,” said Richard Finn, vice president of jeweler E.B. Horn and a partnership board member.

The neighborhood’s biggest draw, Filene’s Basement, closed in 2007 as part of the One Franklin redevelopment. Planned as a spring 2009 re-opening, early 2010 is now a best-case scenario.

“It’s a very difficult project to get done given all the [lending] challenges,” Shulman said. “We continue to believe in Downtown Crossing. We had a great store there before and we’ll have a great store again.”

Shulman said vendors miss Downtown Crossing’s volume. “We’re getting calls constantly from the vendor community” about the store, he said.

The city does not track retail sales for the neighborhood, but rents in the prime intersection run $125 to $175 a square foot. On side streets, they drop to $40 to $50 a square foot, said Randi Lathrop, Boston Redevelopment Authority’s deputy director for community planning.

As early as 2004, concerned about the closing of Filene’s, and the 1,100 jobs lost in the neighborhood, Menino began looking at ways to strengthen Downtown Crossing. He hired consultants, earmarked money for street improvements and is pushing for the area to be designated as Boston’s first Business Improvement District. In a BID, businesses agree to tax themselves to pay for additional services such as marketing, street cleaning and security.

Maureen Atkinson, senior partner with Urban Marketing Collaborative, which worked with the city of Los Angeles to create the Garment District BID, was hired to review Downtown Crossing. She recommended the district focus on convincing pedestrians to linger by widening sidewalks, adding outdoor cafes and residential amenities like small grocers and dry cleaners. She advised using pop-up stores to temporarily fill retail vacancies, a strategy Times Square has used successfully.

The city launched the public relations campaign “Have We Met Yet?” that photographed people walking through the crossing and then wrapping image montages around construction sites and vacancies.

Goldberg said Macy’s, the largest employer at Downtown Crossing, has been moving more upscale in merchandise mix based on the area’s “great promise.”

But he acknowledged the transition might be longer and harder than anticipated. “There aren’t many of us out there who have faced this kind of economy before,” he said.