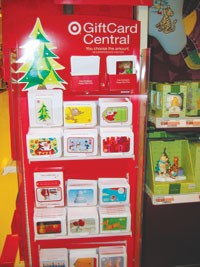 BOSTON — For discount giants Wal-Mart and Target, new strengths and familiar weaknesses showed through the tinsel of the holiday shopping season.

Still ahead: Both retailers anticipate that shoppers redeeming gift cards this month will help boost sales and continue what has evolved into a legitimate secondary season.

The rivals’ December same-store sales results flip-flopped from November. Target rose on fashion and luxury in stores open at least a year, while Wal-Mart didn’t deliver the promise of its early, bullish outlook and aggressive marketing campaign that started two weeks early on Nov. 1.

Wal-Mart’s 2.2 percent December comp-store sales gain was within the company’s 2 to 4 percent projection, but disappointed most investment analysts. Excluding Sam’s Club, the domestic store division’s comps rose 1.9 percent. The world’s largest retailer, based in Bentonville, Ark., warned that its fourth-quarter earnings would be at the lower end of Wall Street’s 82 to 86 cents per share expectations. Yet even with modest increases, Wal-Mart grew sales 6.7 percent, to $27.92 billion, adding $1.74 billion, compared with December 2004.

Wal-Mart executives have spent the past 18 months justifying their strategy to saturate particularly lucrative markets by building new supercenters as close as 1 mile from an existing store. These new stores compete with the old stores and initially dent comps, but ultimately grow Wal-Mart’s market share, the company maintained.

“Is it more important to grow total sales and total profitability, or would you be better off if you did not impact your stores with new stores and ran higher [same-store] comps, which is what Wall Street is focused on?” Wal-Mart chief executive officer H. Lee Scott told the Associated Press in a defense of the company’s strategy.

Target, which surprised investors in November by falling well shy of its 4 to 6 percent projection with a 2.6 comp gain, rebounded in December with a 4.7 percent increase.

In addition, retail same-store sales don’t reflect online sales, which rose an estimated 25 percent through Christmas, led by eBay, Amazon.com, Wal-Mart and Target, according to Internet research firm Nielsen/NetRatings. In January, however, the main focus is on brick-and-mortar stores, where both discounters hope to coax gift card shoppers into high-margin purchases on full-priced spring apparel, home decor and electronics.

To catch those dollars, Target will launch an exclusive collection from British designer Luella Bartley, the first in a series of partnerships under its “Go International!” fast-fashion program. The retailer is also said to have approached Proenza Schouler and a number of other young Seventh Avenue talents about future collaborations. The Minneapolis-based retailer is bringing back Global Bazaar, a limited-time offering of pricier furniture and exotic accessories arranged in vignettes akin to a high-end furniture store. Bazaar was a new, highly profitable event for Target last year.

Wal-Mart rolled out spring apparel on Dec. 26, earlier than usual. The retailer has predicted that substantial increases in gift card sales will help drive projected 3 to 5 percent growth in January.

“Don’t write off Wal-Mart,” said Ulysses Yannas, a broker with investment management firm Buckman, Buckman & Reid. “I am buying into their story that they are going to end up with better gross margins [than last year] through the gift cards.”

Bob Buchanan, an analyst with A.G. Edwards, described Wal-Mart’s holiday performance as “disappointing.” Top management changes, notably John Menzer as vice chairman and Eduard Castro-Wright as president and ceo of Wal-Mart U.S., have not yet brought the improvement the domestic division needs, he said. “Many people on Wall Street rushed to the conclusion there would be immediate improvement, and frankly we haven’t seen that yet.”

Yannas characterized Wal-Mart as being in a period of “drastic change” fueled by reorganization across several management tiers and a shift in merchandising strategy to include pricier goods. “All this will take time,” Yannas said. “Wal-Mart goes slowly, but remember, they are great at execution.”

The retailer’s experiments with customer price tolerance were subtle. Bath and body gift sets showed a greater price range, from the traditional $2 sets to a mammoth washtub-sized set for $28.44. In previous years, they have been less than $24. Wal-Mart took more creative risks with merchandise this year, selling, for example, a $98.88 acoustic guitar that performed well in Boston area stores. On walmart.com, the company offered cashmere throws and men’s cashmere-blend overcoats, for about $100 each.

Target’s move upmarket was more dramatic. The retailer made an aggressive case to department store shoppers who may have traditionally bought mostly toys and stocking stuffers at the discounter. Pricing on items such as a men’s two-ply cashmere sweater ($99.99) or a hand-painted beaded necklace (also $99.99) matched that of department stores. Target had niceties some department stores lacked. A $39.99 Gilligan O’Malley paisley silk gown, for example, came on a ruched silk hanger for giving. Luxury gifts in its “Luxe” program were delineated with upscale embossed hangtags hung on silk cording.

“Target did a great job of offering giftables, at department store quality and styling, but without making shoppers wait for [department store] sales,” said Deborah Weinswig, retail analyst for Citigroup.

Target also matched some specialty stores in terms of trends, carrying nearly identical items seen at Pottery Barn and Gap for less than half the price.

Here’s a look at what worked, what didn’t and what was new for both retailers:

What worked: Women’s apparel and shoes, which Target cited as two of its three best-performing categories in its December sales call. Apparel was constantly fresh. New styles arrived every few days. Fiorucci, for example, had three deliveries in the last week of December, and existing merchandise was shuffled around to create fresh looks on wall displays and prominent aisle racks. Stores were overstuffed with apparel on Black Friday, but Target unclogged things quickly by moving older goods onto sales racks and aggressively marking them down. Clearance racks ultimately became a traffic draw for apparel, consistently attracting browsers.

What didn’t work: Target again had trouble keeping best-selling items in stock, even in early December. During regular checks of Boston area stores, the retailer ran low on sparkle paiette handbags, Mossimo knit lounge sets, embroidered Fieldcrest sheets, toddler’s tights, holiday paper napkins and newsboy caps, among other items. Its glove, slipper, candle and picture frame areas were decimated in the Saugus, Mass., store and remained so for the last week before Christmas. A.G. Edwards’ Buchanan noticed significant out-of-stocks in cosmetics in Washington stores during the final weeks of December.

“They’ve been struggling with in-stock long enough that at some point, you’ve got to raise some questions about the efficacy of the technology they’re using,” Buchanan said. “They’ve got the look and the quality, the question is do they actually have the merchandise” on the floor.

What was new: Target’s labor management technologies, designed to get more productivity from its store workforce and increase sales per square foot, were in use. The pagers all associates wore crackled out commands — “Restroom check reminder. Who is available?” or “Jewelry counter, second reminder” — which became the unofficial soundtrack to the shopping experience. The retailer also had checkout speedometers, which help track productivity and identify which cashiers have slower-than-average processing rates for additional training.

What worked: Wal-Mart’s activewear — once dominated by baggy T-shirts and bulk programs of $5 sweatpants — improved and shoppers noticed. The presentation overall was trend-right and focused on two brands, Danskin Now and private label Athletic Works. Activewear was the busiest adult apparel section in store visits to Greater Boston, Plymouth, Mass., and southern New Hampshire, even though prices have risen significantly (a Danskin hoodie went for $18.83). The category will likely continue to gain momentum in January when New Year’s resolutions turn to weight loss and fitness. “I’ve seen the most improvement in activewear in terms of the apparel offering,” said Citigroup’s Weinswig. “The quality and price point right now are unrivaled.”

What didn’t work: The “Home for the Holidays” Christmas ads featuring Destiny’s Child and teen heartthrob Jesse McCartney were warm and appealing, but stores weren’t. Customers often came “home” to none-too-clean restrooms, long lines, carts overflowing with returned merchandise waiting to be put on shelves, cops checking receipts at the doors and cashiers hollering over the din to direct shoppers to open registers. Wal-Mart improved merchandise presentation — particularly in apparel and electronics — but failed to present enough new gift ideas to create a substantially different impression. “It’s all the same. Even the little $5 action figures are the same as last year,” complained Annette Morris of Medford, Mass., on Black Friday.

What was new: Trend-right women’s sportswear. Wal-Mart stayed on the ball instead of putting out sweaters festooned with jingle bells and calling it holiday. The retailer delivered at least three trend statements for each of its major brands in the seven-week period from mid-November to Christmas. It had metallic, men’s wear-inspired, fake fur, stretch velvet and prairie-Bohemian styles, putting the company in step with most fashion specialty chains. Both George and No Boundaries were in neat, well-defined sections. Wall displays were used to effectively show variations of a look. For example, No Boundaries made a statement about embroidered jeans paired with peasant tops. Five or six versions of that look were shown across a wall, allowing shoppers to mix and match. But did the much-improved effort translate to sales? In Boston stores, the department was notably quiet. “I think Wal-Mart still needs to do a better job of telling its story on apparel,” said Citigroup’s Weinswig. “Not everyone knows how much they’ve improved.”