From Liz to Burberry: Ahrendts to Replace Bravo as Brand’s CEO 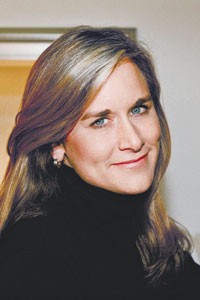 LONDON — They’re changing the guard at Burberry Group plc — and the choice is a surprise.

Angela Ahrendts, executive vice president of Liz Claiborne Inc., has been tapped to replace Rose Marie Bravo as Burberry’s chief executive officer. Bravo will step down in July when her contract expires.

This story first appeared in the October 12, 2005 issue of WWD. Subscribe Today.

Bravo, however, will remain with the company in the newly created role of vice chairman. She will spend the first six months of next year working closely with Ahrendts, who will join Burberry on Jan. 9 as an executive director. Ahrendts, 45, will take over the top job on July 1.

Bravo, 54, said her successor — who has also done stints at Henri Bendel and Donna Karan International — fits well into the Burberry mosaic. “She’s a true leader and a team player,” she said, adding her successor was also a natural fit with Burberry’s creative director, Christopher Bailey. “The two already worked together at Donna Karan, and have a good relationship.”

Ahrendts added in a telephone interview: “[Bravo] has left a phenomenal foundation to build upon with the world-class management team she has put in place. There are a lot of initiatives they are working on right now, and a lot of new product launches, including fragrance launches. The timing is great with where [Bravo] is at this stage of the business.”

At Burberry, Ahrendts will receive an annual base salary of $1.3 million. Her annual bonus will be tied to the company’s performance when she takes over. She will be able to receive a maximum of 150 percent of her base salary, or up to $1.95 million.

In addition to the bonus, she has access to a long-term “personal performance” plan. Under the terms of that plan, she’ll be eligible to receive up to $4 million in cash between 2006 and 2008, inclusive. How much she receives will depend on whether she reaches targets she sets together with the company.

Burberry will also provide Ahrendts with $3.9 million worth of stock options that will vest over a five-year period. Their final value will depend on Burberry’s share price when the options vest.

The company will also pay her $4 million over a two-year period to compensate for the loss of incentives at Liz Claiborne Inc.

Ahrendts will receive a $25,000 annual clothing allowance and an “overseas allowance” of $610,000 per year for the first five years of employment. That allowance is meant to cover relocation fees and travel costs for Ahrendts; her husband, who is winding down his U.S. construction business to move, and her three children, ages 10, nine and five.

The company will also give her pension contributions worth 30 percent of her base salary, or $390,000 annually. All salary-related figures have been provided by the company in dollars.

Bravo said it was the Burberry board members who asked her to remain with the company in the role of vice chairman.

“I’ve done two presidential terms, and I’m starting to look — and feel — like Clinton, Bush and Blair, who’ve all put in a lot of time,” said a lighthearted Bravo. “And I’m not Franklin D. Roosevelt!”

She will be working closely with Burberry’s chairman, John Peace, as well as with Ahrendts and the executive team on matters of strategy, product and design.

Although she’ll remain a Burberry employee, Bravo plans to move back to Long Island, N.Y., her home before she relocated to London eight years ago to take over Burberry. Her new job as vice chairman will take up “at least” 12 days each month.

“The new position is going to give me free time — it’s not a 24/7 job like the current one,” said Bravo, adding she would be working only for Burberry and planned to retain her board positions at Tiffany & Co. and the Estée Lauder Cos. “I love that I’m going to be able to stay on, and I will do whatever the Burberry business requires in the future.”

Bravo added she’s looking forward to her future freedom, and plans to spend her moments away from work fulfilling “long-overdue” family obligations, spending quality time with her six grandchildren and devoting more time to her charities.

“It’s time to give back,” said Bravo, who didn’t appear to be wistful or nostalgic about leaving her current position. “It’s only a job, not a life, and it’s a wonderful moment. I’m glad we can have an orderly succession, and that I have the luxury of staying on to help.”

The selection of Ahrendts is unexpected on two levels, though. Analysts had expected Bravo to be replaced by Burberry’s president and chief operating officer Brian Blake, formerly of Gucci Group. But Blake was never actually in the running. “Brian requested that he not be considered for the role due to family circumstances,” Peace said in a statement Tuesday.

Ahrendts’ current role in the more moderate side of the business also is a bit of a switch. After all, Burberry’s parent, Great Universal Stores plc, recruited Bravo from Saks Fifth Avenue.

But Ahrendts obviously has designer experience and even at Liz Claiborne, she has been responsible for such bridge and better women’s wear and men’s wear brands as Dana Buchman, Ellen Tracy, Juicy Couture, DKNY Jeans, Laundry by Shelli Segal and Lucky Brand, rather than the company’s core, moderate brand. She was part of the executive team that diversified Liz Claiborne Inc. to 41 brands from 10 with sales of $4.6 billion.

Before joining Claiborne in 1998, she was executive vice president of Henri Bendel. Prior to that, she spent six years as president of Donna Karan International.

“I picked up a lot from the product end at Donna, and Liz has rounded me out at the commercial and the global end,” Ahrendts noted.

Asked whether she was ready to fill Bravo’s arguably big shoes, or if she felt any pressures to keep up the Burberry momentum that Bravo was able to generate, Ahrendts expressed confidence in her leadership abilities to retain and attract world-class talent and expand the business.

“There are some wonderful underpenetrated markets….There is a lot of growth left,” Ahrendts said, pointing to expansion programs that Burberry recently started in India, China and Russia.

Glenn McMahon, U.S. president of Dolce & Gabbana, worked with Ahrendts at Donna Karan and Liz Claiborne for a total of eight years. “Angela is a terrific merchant,” McMahon said. “She is very well versed in the designer zone, and she has a great balance between the commercial and the design aesthetic. When I heard the news, I thought, this is a perfect next step for Burberry.

“She is a terrific leader with the ability to drive the creative team with financial savvy,” McMahon added.

Nautica president Denise Seegal, who hired Ahrendts at Liz Claiborne as vice president of corporate merchandising, said: “Angela is a very accomplished executive and her management and merchandising skills that she had at Liz Claiborne will make a smooth transition. This is great for Burberry and there will be many future opportunities for them.”

Bravo said on Tuesday that Ahrendts would bring a new rush of excitement, and talent, to Burberry.

“I think it will be really stimulating for the company to have a new talent, and for Angela to offer a new take on Burberry. But we have to give her a chance to get to know Burberry before she puts together her three- to five-year plan.”

She added that Ahrendts has a complementary set of skills. “Whereas Brian [Blake] and I have a retail, fragrance and accessories background, she has more wholesale experience, she’s steeped in apparel and has a better understanding of the supply chain than I do,” she said.

Indeed, one London-based analyst said that while Bravo was stellar when it came to her vision for the brand and her creative talents, she was not strong on the operations side.

“It’s great news that Ahrendts is very good with supply chain because that’s a part of the business that’s been letting Burberry down. It’s what the recent IT changes are all about,” the analyst said.

Burberry has just implemented Project Atlas, a massive information technology overhaul aimed at smoothing out bumps in the supply chain and making the business more efficient. The project is being spearheaded by Stacey Cartwright, Burberry’s chief financial officer.

Ahrendts will sit alongside Blake and Cartwright on Burberry’s executive board, which Bravo refers to as the “nucleus” of the company.

Analysts were upbeat Tuesday about the management changes. “The fact that Bravo will remain at Burberry — albeit in a different role — should come as a relief to shareholders who feared the company would suffer if she were to leave,” said Constanza Mardones, retail analyst at Citigroup in London.

“It appears that Bravo will remain quite a hands-on vice chairman, focusing on the more creative, front-end areas, and ceasing the more administrative parts of her current role,” said Mardones.

— With contributions from Marc Karimzadeh and Julee Greenberg, New York