Tariffs Could Be Problem for Gap Shoppers

But the company sees strength across the portfolio.

A Gap store in New York.

As tariff tensions continue, it could become a problem for Gap shoppers.

“At the end of the day, we will be forced to pass [tariff costs] on to customers through price increases,” Teri List-Stoll, executive vice president and chief financial officer at Gap Inc., told investors Tuesday during the Jefferies Consumer Conference on Nantucket, Mass. “We’ll do that in a smart way. It’s not going to be in a blanket way. We’ll do our best to mitigate any volume impacts from increased pricing. But it is a cost; it is a real cost that ultimately will be borne by the customer.”

In May, the White House said it would impose additional tariffs on all Chinese imports not already targeted in the trade dispute, including apparel and footwear. The levies would total 25 percent and come on top of existing duties, which average about 13 percent. Many companies have already begun reducing their footprint in China, moving production to other countries. Others — such as Vince — say raising prices is the only way to preserve quality.

But The Gap, which includes Old Navy, Banana Republic and Athleta under the company umbrella, in addition to the namesake brand, has a plan — raising prices is merely the last resort. And the plan is a two-parter.

“One is to continue to reduce our dependence on China as sourcing,” List-Stoll said.

In the company’s latest 10-K regulatory filing, Gap disclosed that about 21 percent of products are sourced out of China. In terms of just apparel, that number is closer to 16 percent.

“So on a relative basis, we are not in a terrible position, because we’ve been really moving away from China to other countries for a number of years now and we will continue down that path,” List-Stoll said.

She added that some items can’t feasibly be sourced from anywhere but China.

“So, we’re going to be stuck with that and that’s where the second part of the playbook comes in, which is we need to figure out how do we cover any tariffs that might be imposed and we will do that through negotiations with vendors and other identified ways to reduce the associated AUC in the product,” List-Stoll said.

Still, the Gap, much like other retailers, will need to wait it out. It’s a situation that has left investors on edge.

“The tariffs definitely represent a big uncertainty that’s kind of overhanging everyone,” List-Stoll said. “We don’t like tariffs any more than anyone else.” 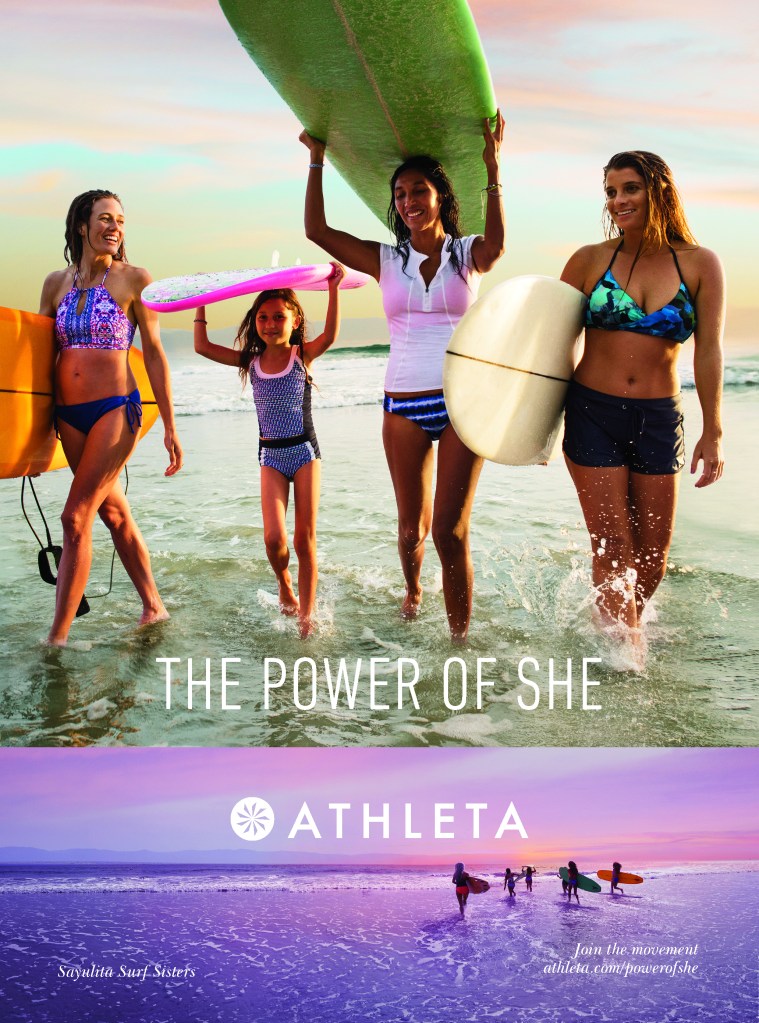 Imagery from Athleta’s “Power of She” ad campaign.  Courtesy Photo

But while company shares are down about 46 percent year-over-year — a sign of greater retail trends in addition to tariff woes — the Gap has a few things going for it. Like its Old Navy, which the company plans to spin off, and Athleta brands.

“Athleta is a gem of a brand,” List-Stoll said, and pointed out that amid the current ath-leisure craze, the brand had a loyal customer following.

“That’s probably our most affluent customer base,” List-Stoll said. “And so we think about the real estate strategy…as one where we have quite a bit of runway for new [smaller] stores.”

“That’s a responsible runway for that brand,” List-Stoll said. “And as you remember, Athleta is our most highly penetrated e-commerce brand having started from a catalogue business. And so the specialty channel on the e-commerce channel, there may actually be opportunities in outlet or franchise for Athleta.

“We don’t see any major changes because frankly, the model is working,” she added. “Every brand has hiccups now and then. We had our few hiccups in the first quarter. But fundamentally, we see a lot of growth.”

“We have a really nice kids and baby business at the Gap brand,” she said. “Janie and Jack plays at a level a bit higher, [has a] very profitable store base [and a] very small brand at the moment. But one that we think has nice growth potential as we move forward.”