Gap Inc. has just put in a tall order -- finding a chief executive officer for the struggling group.

By David Moin and Sharon Edelson on January 24, 2007
View Slideshow 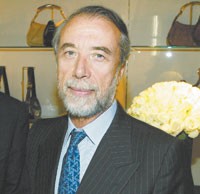 Gap Inc. has just put in a tall order — finding a chief executive officer for the struggling group.

And observers say those most qualified for the job to replace Paul Pressler — apparel merchants with vision and turnaround skills — are either generously compensated and content with their current employers, impeded by non-compete clauses, of or near retirement age or just not willing to take on the monumental task of reviving the $16 billion Gap Inc. and its Gap and Old Navy brands.

“There’s only a handful of people who potentially could affect meaningful change at the Gap,” said Robert Buchanan, a retail analyst at A.G. Edwards. “A lot of damage has been done to the franchise. Most of the people who could help them are already tied up and very happy with current positions.”

“This is a multibrand, multibillion-dollar public company beholden to Wall Street,” said Elaine Hughes of E.A. Hughes & Co. executive search. “Things are very complex. I don’t think there is any one person that can fit the bill. It’s difficult to find one person with operations, financial and merchant skills. The best strategy for the board at Gap to consider is one where the helm of the company is a combination of two executives with complementary skill sets. Ultimately, one person is the ceo but the second in command is considered more of a partner than a subordinate.”

“Gap needs someone who can put their hands on the wheel and create progress quickly,” said Arnold Aronson, managing director of retail strategies, Kurt Salmon Associates. “Some of the speculation centers on industry veterans that have the turnaround experience and qualifications to take the assignment on a shorter-term basis to get the ball rolling and, in the process, attract capable succession management. Allen Questrom accomplished this in under five years at Penney’s. But a turnaround is something you can’t put a hard and fast time limit on.”

Karen Harvey, president of Karen Harvey consulting group, added, “What’s really important is product and very clearly connecting with the DNA of the original culture of the Gap organization, and that was all about driving creativity and making product the most important objective. Each brand must speak directly to their consumers because each brand is in a very crowded market. The next leader needs to be someone who is ultimately a top merchant and who is really an ambassador of design.”

Robert Kerson of Kerson Partners executive search, believes Gap’s ceo hunt is complicated by other retailers seeking top talent now, as well. Express and Ann Taylor Loft are searching for presidents, while Pacific Sunwear and Pier One are seeking ceo’s. It’s not unusual for retailers to clean house in January after evaluating the last year’s performance, but Kerson said the practice “puts them all in bind for talent. You have to wonder, is there enough talent to fill of all these jobs.”

Unfortunately, among those most successful running multibrand specialty retailers are those running companies they built, such as Limited Brands’ Leslie Wexner and Abercrombie & Fitch’s Michael Jeffries, who are not about to leave their babies. Both men also are in their 60s. Meanwhile, many said the man Gap needs is the one the board pushed: Millard “Mickey” Drexler, now chairman and ceo of J. Crew Group, one of the stars of specialty retailing. It’s a long shot he would give up Crew to head back to San Francisco, given his 12 percent stake in the retailer.

“You need somebody with gravitas,” said another principal of a search firm. So thin are the ranks of qualified candidates that this search executive concluded, “Eventually, Gap will have to look outside the industry.”

“The thing that needs to happen before anyone signs up is that the Gap needs to figure out what they’re going to do with the company,” said William Cody, managing director of the Jay H. Baker Retailing Initiative at the University of Pennsylvania. “It will be hard for any ceo candidate to step in without a tremendous golden parachute. It’s a huge risk. My gut feeling is that there is going to be a leveraged buyout. To say that Gap is going to be able to turn itself around in the public eye is really farfetched.”

As for where to look for ceo candidates, “I don’t think the luxury segment is out of the question,” said Gabrielle Kivitz, senior retail analyst at Deutsche Bank. “Domenico De Sole, [former ceo of Gucci], is on their board. They’re going to do a lot of work to make sure they have the right candidate. Right now, the bar for achievement is set very low.”

Among the executives industry sources believe could be on Gap’s radar are:

Some sources also mentioned Dorrit Bern, chairman and ceo at Charming Shoppes and a former Sears merchant; Jim Scarborough at Stage Stores, who turned the business around, delivered value to shareholders and is considered a dynamic leader, but not a vertical retailer, and Scott Edmonds, who runs Chico’s and oversees multiple chains there. If Gap falls short in the U.S., the search could go overseas to seek potential candidates, such as Stuart Rose, ceo of Marks & Spencer, and Jane Shepherdson, former brand director of Topshop.