After some tough times, Jean Paul Gaultier is on the rebound, with rtw sales going strong, and a second Moscow boutique in the works. 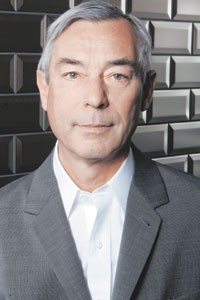 PARIS — After a dark period that saw 31 employees axed from the payroll and a spotlight shone on its deep financial woes, Jean Paul Gaultier is on the rebound.

Ready-to-wear sales are advancing at a double-digit pace, a second Moscow boutique is in the works less than six months after the first one bowed, and the designer’s Hong Kong partners are chomping at the bit to bring in Gaultier’s couture collection to solicit orders from wealthy Chinese clients.

What’s more, the company — which unveils its spring collection on the runway here today — looks on track to break even in 2006, according to Eric Labaume, the company’s new president.

In his first interview since arriving at Gaultier in April from Balmain, Labaume acknowledged plenty of work ahead, particularly in the underdeveloped accessories category and a stalled men’s wear business.

Mostly, however, he accentuated the positive, hailing Gaultier’s deep creative reserves, improving morale within the company and product initiatives, like a new eyewear collection licensed to De Rigo bowing at the Silmo show later this month.

“I am very confident that we will stay with double-digit increases,” Labaume said, affirming that level of bookings for the pre-spring collection shown to buyers in July. “When I came back from vacation, one of the first things I did was visit our boutique on George V. It was in late August and the manager told me he had already sold 45 percent of what he had received. These are pretty good indications.”

The layoffs in January, which affected seamstresses, designers, sales and administrative staff, were not the final retrenchment.

The future of the company’s store at 761 Madison Avenue is in flux, with some saying it has closed and others insisting it remains open. Sources said the terms of the lease require it to remain open or Gaultier will have to pay a huge penalty. They said the store opens a few days a month just to satisfy that requirement. Calls to the store on Monday were not answered. A staff member at Aeffe, Gaultier’s U.S. representative, said the store is closed for renovation, while Gaultier officials in Paris declined comment on the unit, which opened with much fanfare in 2002 and has a Philippe Starck interior and crystal clothing racks.

Labaume also was loathe to discuss the particulars, but portrayed it as inconsistent with a largely healthy U.S. business. Indeed, Bergdorf Goodman plans to open a new in-store shop for Gaultier early next year, he noted.

A soft-spoken, bespectacled executive with the clean-cut demeanor of a university professor, Labaume, 53, is said to be bringing a greater sense of order to a family company often run on instinct.

Still, the pillars of the house remain intact, and Labaume reaffirmed a commitment to the money-losing couture. He said it pays in spades in press coverage, has enticed new customers to rtw and gives Gaultier an “ultimate” creative outlet that nourishes and inspires other product lines.

He declined to give sales figures for the lauded Ukraine-inspired winter couture collection shown in July, but said he expects “an incredibly good result.” That his Asian partners would like to import the collection to take orders in Hong Kong strikes Labaume, whose career includes stints at Mendes (maker of Yves Saint Laurent and Christian Lacroix rtw) and Ines de la Fressange, as “amazing.”

In the Saint Laurent days, he recalled that the designer once sold couture in Tokyo, but “I don’t believe it’s ever been done in Hong Kong. This is something new.”

That said, Labaume said the company is not in a position to expand its couture production, given the need for tight cost controls that led to the layoffs.

As reported, the Gaultier business had overstretched with its launch of couture, a retail rollout and a substantial investment in its swanky new 50,000-square-foot headquarters on the Rue Saint Martin.

Labaume said the Gaultier house, which celebrates its 30th anniversary next year, reminds him of YSL in the Pierre Bergé era, calling it a “traditional” company in its methods in the design studio, atelier and press office. “Nothing is left to chance, but at the same time, Jean Paul is very much creative,” he said.

Accessories is another story, since the house has yet to hit on an iconic bag to drive the lucrative category. “It’s a small business. We are all aware that it needs to improve,” Labaume said. “Our boutiques need these accessories. Everyone wants accessories.”

Gaultier, extremely hands-on with all product categories, wants to launch accessories on his own terms. “Mr. Gaultier is a man of excellence, detail and quality, so we are not ready to market a line at 299 euros [$358.80] just because that is maybe what the market wants,” Labaume said.

However, Labaume hinted men’s wear is a more imminent rejuvenation priority, with accessories coming at a later date.

To be sure, Gaultier’s workload is already daunting: 12 collections for Gaultier per year, plus the new hat he wears as women’s rtw designer at Hermès International, which also holds a 35 percent stake in Gaultier. He shows his fourth collection for that house on Saturday.

Labaume said Gaultier devotes on average one 12- to 14-hour day to Hermès each week, during which he is unreachable. “He is very well organized,” Labaume said. “And when he is at Hermès, we leave him alone.”

Has the experience at Hermès enriched the house of Gaultier? Labaume replied, “I think it gave him new horizons.”

Not to mention a taste for cashmere, a fiber he has shunned to date chez Gaultier. “[Cashmere] may come,” Labaume said with a laugh. “I would not be surprised.”

Consolidated sales last year at Gaultier declined 8 percent to 27 million euros, or $32.4 million at current exchange, according to the Hermès International annual report. About half of that comes from royalties, since Gaultier licenses rtw, knitwear, jeans, fragrances, watches, eyewear and beachwear. Only jewelry, shoes, leather goods, scarves and ties are produced in-house.

Expressed in retail terms, sales of Gaultier branded products reached about 600 million euros, or $720 million at current exchange rates, last year, with about 50 percent of sales generated in Europe and the Middle East; 25 percent in North America, and the remaining 25 percent in Asia.

In addition to Starck-designed flagships in London and Paris, there are more than a dozen other outlets, some franchised, in such diverse locations as Toulouse and Cannes in France, Las Vegas, Kuwait, Singapore, Taiwan, Tokyo, Riyadh, Hong Kong and Beijing.

Labaume said locations on the board for 2006 include Kuala Lumpur, a second Hong Kong location and the second Moscow boutique.