Giving Lessons on the U.S. Consumer and Selling Luxury Intimates

Two lectures and seminars this month capped off a busy innerwear market that began in February. The lectures covered breaking into the U.S. market and understanding the American consumer's mind-set, as well as how Asian-inspired culture teamed with... 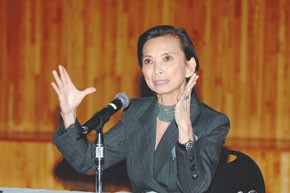 Two lectures and seminars this month capped off a busy innerwear market that began in February. The lectures covered breaking into the U.S. market and understanding the American consumer’s mind-set, as well as how Asian-inspired culture teamed with the American experience can produce luxury lingerie during tough economic times.

Bendon USA, the American division of New Zealand-based Bendon Ltd., was part of a cocktail party and panel discussion on Tuesday sponsored by the New Zealand Trade & Enterprises Beachheads Program and KEA New York, an independent network that brings together expatriates of New Zealand. The seminar, which was staged at the Saatchi & Saatchi building in Manhattan to promote “Kiwi” business in the U.S., was moderated by Kevin Roberts, worldwide chief executive officer of advertising agency Saatchi & Saatchi. Other New Zealand companies represented were Mead International/Artesian Mineral Water, Orion Health and Tait Radio Communications.

Ambassador Roy Ferguson of New Zealand told an audience of more than 100 that he felt bullish about the U.S. Trade Representative’s announcement on Feb. 4 that the U.S. would join negotiations on financial services and investment with the Trans-Pacific Strategic Economic Partnership, which includes New Zealand, Singapore, Chile and Brunei.

“The strategy is accelerated free trade in the Asia-Pacific region, and one of New Zealand’s goals is liberal trade between the U.S. and New Zealand,” said Ferguson, adding New Zealand is “aggressively pursuing” apparel manufacturing for export trade with the U.S.

Bendon, a 60-year-old intimate apparel company with a strong origin in corsetry, was represented by Victoria Vandagriff, president of the U.S. operation that has had headquarters in New York since 2005. In addition to the Bendon brand, the company produces full-figure bras by Fayreform, and two designer licensees: Elle Macpherson Intimates, which was introduced to the U.S. market in 2005, and Stella McCartney lingerie, launched last year.

Vandagriff gave advice on the cultural differences between American consumers and their international counterparts in terms of product and communication.

“Bendon is an iconic brand in New Zealand,” she said. “It was a big deal when we launched the brand in the U.K. [in 2002], and our discussions this evening are on New Zealand companies that have launched successfully in the U.S. For me, the focus is on cultural differences. Many European companies come to the U.S. and find failure. They don’t take into consideration how different the [U.S.] consumer is and how different her mind-set is.”

Meanwhile, some 125 industry executives and design students attended a lecture by Josie Natori at the Fashion Institute of Technology on March 19 in Manhattan. Titled “The Art of Natori,” which also is the name of her book published last year, Natori discussed her brand and how she has developed her 30-year lingerie business, where she serves as ceo.

She also talked about her “East meets West” philosophy derived from her Filipino background, American education at Manhattanville College and the Japanese culture of her American-born husband, Ken. A slide show illustrating these elements, mainly from her book, outlined the Natori brand’s heritage and expansion into other labels, including Josie, Cruz, Josie Natori, Natorious and Natori Couture, as well as men’s wear and home accessories.

“I have always believed the Art of Natori is about creating a feeling of pure indulgence,” she said.

“It was quite a night,” said Natori. “All of the society of the Philippines was there and I was sitting next to Imelda Marcus in all her crowning glory. All the while, there were 75,000 protestors in the street in front of the Shangri-La Hotel where the event was taking place. They were chanting and demanding the impeachment of the president of the Philippines, Gloria Macapagal-Arroyo, for corruption.”

Macapagal-Arroyo was not at the soiree.