It has been a strong year for high-end jewelry and watch firms thanks to rapidly expanding sales in the emerging Chinese and Russian markets. Add to that a propitious climate for luxury in America, Japan and the Middle East, and most executives... 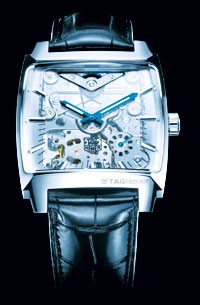 It has been a strong year for high-end jewelry and watch firms thanks to rapidly expanding sales in the emerging Chinese and Russian markets. Add to that a propitious climate for luxury in America, Japan and the Middle East, and most executives predict a solid end of the year with momentum spilling over into 2005.

So it’s no wonder that, when Bernard Fornas, president of Cartier International, sets foot in China, he gets excited.

“It’s incredible,” he explained. “You arrive and look around, and everything has changed. There are more luxury cars, higher buildings, more stores, and more clients. When you come from Europe, where things hardly change ever, it’s literally amazing.”

Fornas said Cartier’s sales exploded 77 percent in China from April to August. This month, an important Cartier flagship will open in Shanghai. By yearend, Cartier plans to operate 10 boutiques in China with as many as another 20 shops planned to open over the next years.

“Both of these countries have a newly affluent class who is hungry for luxury brands,” he said.

With its rapidly evolving business and social climate, many jewelry and watch houses look to China as one of the most important new gold mines.

“China mirrors the Japan of 10 or 15 years ago,” said Fred Reffsin, president of Concord. “They are hungry for aspirational international luxury brands.”

“There has been very strong double-digit growth this year — even after the impact of SARS — and we expect it to continue,” he said.

Chopard, the family-owned jewelry and watch house, opened its first shop in Shanghai in September. “The potential is huge,” said Caroline Gruosi-Scheufele, vice president and creative director of the house.

“Even if you only reach one percent of the population, it’s already a lot. For us in the long run, it will be a very important market.”

Gruosi-Scheufele said Chopard is scouting a second location in China, in Beijing. “For the moment, the growth opportunities are in China and Eastern European countries and Russia,” she said, noting Chopard has opened shops in several former Soviet satellite states, including Uzbekistan and Kazakhstan.

“The more affluent countries in Eastern Europe have oil and natural resources,” Gruosi-Scheufele said. This fall, Chopard opened its second boutique in Uzbekistan.

“In Russia, business is growing double digits, and it keeps getting stronger,” she said. “They love to travel as well and spend on brands when they are abroad.”

Gruosi-Scheufele also reported strong sales in the Middle East and the U.S.

“It’s been a very good year, and we’re confident for the end of the year,” she said. “For us right now, it’s more of a question of whether we’ll be able to keep up our production to demand.”

Gianluca Brozzetti, chief executive of A&G Group, noted, “Eastern Europe — and by that I mean Russia — is the most up-and-coming market for us by far. Moscow is leading the way — the entrepreneurs there are making money and spending it. And they are looking to established brands. Don’t forget these are countries with history, tradition and culture. They respect the beauty of stones, of craftsmanship, of the silversmiths. We are finalizing our plans to open a store there next year.”

At LVMH Moët Hennessy Louis Vuitton, Philippe Pascal, head of the watch and jewelry division, said Asia and China have been “fast-growing markets with significant growth potential….We have been recovering fast from the SARS crisis, and China is a challenge which we are attacking in priority with TAG Heuer and Christian Dior Watches.”

For the six months through June, LVMH reported that sales in its watch and jewelry division climbed 32 percent. “We have good momentum for the end of the year,” said Pascal.

He said Russia and the Middle East have grown, and that two years ago, LVMH established a small presence to distribute TAG Heuer and Christian Dior.

As did the majority of executives, Pascal rued high import taxes that restrict growth in India, though he said the market has strong potential. He said sales also have been strong in Russia, the Middle East and the U.S. He added that De Beers LV, LVMH’s joint venture with De Beers, was growing “step by step,” and that it plans to establish a retail presence in the U.S., with a store in New York scheduled to open in the middle of next year.

Meanwhile, Pascal warned that, though China and Russia had potential, it takes time to build a business there. He added that many companies are charging into new markets cavalierly without focusing their efforts and shoring up brand image with selective distribution.

“There is no easy El Dorado,” he said. “I see too many brands, especially in watches, chasing too many market opportunities. For each LVMH brand, we have a focused strategy in terms of market development, product development and consumer targeting.”

At Chanel’s watch and jewelry unit, president Philippe Mougenot reported robust sales in China and Russia, too, saying that Chanel has an important “project” in the works to boost its jewelry and watches in China next year.

“It’s been an excellent year,” said Mougenot. “We’ve also had a strong renaissance in the United States. Jewelry has grown at double digits in the U.S. Asia and Taiwan have been strong, and we’ve also had a good performance in France. In high jewelry, we’re up 25 percent.”

Fornas’ Cartier said, though Russia and China presented the most immediate potential, sales have been robust elsewhere in Asia as well as in the U.S. He agreed with the majority of his cohorts that much of the growth was coming from the most exclusive products. “High jewelry has been very strong,” he reported. “Santos is also cleaning up,” he said, referring to the house’s redesigned Santos classic watch.

Middle Eastern sales also have been a bright spot for most jewelry and watch houses, with Qatar, the United Arab Emirates, Kuwait and Libya doing well.

“The airport in Dubai is one of the top five for luxury goods in the world,” said Reffsin at Concord.

“The Chinese business has been built on the back of diamond solitaire engagement rings, which account for 70 percent of the total market,” he added. “About eight out of 10 brides get diamonds. It’s just remarkable. We’re talking about rings that cost about $500 and they are very simple and classic. We’re talking about a mass, moderately priced market.

“India, on the other hand, has a massive elite and a jewelry tradition that stems from the maharajas. The growth in that market is coming from fashion-driven, ornamental jewelry that costs under $1,000 at retail. In time — in 25 years or so — China will be the world’s major consumer of diamond jewelry. India, which is now one of the top five markets will be in the top three in about 10 years’ time.”

Severin Wunderman, chairman at Corum, said sales for the year were ahead 27 percent so far. “Germany, Switzerland, France, Italy and Benelux are in the doldrums, as where markets like Russia, India, Singapore and Hong Kong are really saving us.”

He continued, “The reasons are mostly not tourism in Europe….The reason the other markets are saving us is that they are the new millionaires in the world and are spending for luxury goods that they never had access to before. How long will it last?”

Wunderman believes that sales could calm soon. “My crystal ball tells me to be very careful as I feel a difficult time is on its way. [I don’t] have real data, it’s just a gut feeling.”

— With contributions from Samantha Conti, London