Green is looking to do a deal with creditors that will likely see Topshop shut its 11 U.S. stand-alone stores and other units across the U.K. and Ireland.

After months of speculation in the British media, Green finally went public with his plan to seek insolvency for the troubled Arcadia retail group, parent of Topshop, Topman and a host of struggling high-street retailers such as Burton, Dorothy Perkins, Evans and Wallis.

The company has set out a series of proposals “to ensure the long-term sustainability of the group in today’s highly competitive retail environment,” with Green joining a long line of British retailers who’ve been forced to take similar action to rescue their businesses.

“We have in place a well-developed turnaround plan for the group, which includes driving cost efficiencies, managing the refreshed retail store estate and investing in the continued development of our multichannel proposition and logistics,” he said.

Daniel Butters and Ian Wormleighton of Deloitte have been appointed as nominees to the CVA, while Arcadia said it has already “engaged extensively” with its key stakeholders ahead of putting the CVA proposals to them in early June.

Butters said Arcadia and its portfolio have faced “unprecedented market conditions” in recent years, which have significantly impacted the group’s financial performance. He said the CVAs would provide a stable platform for the leadership team to implement its turnaround plan.

Rising business taxes, falling footfall and the shift to online have damaged many British retailers with large store estates. The shrinking value of the post-Brexit referendum pound has also put pressure on margins as most of these retailers source and manufacture outside the U.K.

In Britain, when a company is experiencing difficulties paying its debts, it can seek a CVA, which allows it to enter into a legally binding agreement with creditors, suppliers and landlords.

The aim is to come to a compromise agreement with them, and to avoid an administration or liquidation, giving the company time to reorganize and restructure its funding and operations with as little disruption to the day-to-day trading as possible.

Arcadia said it has identified 23 out of its 566 U.K. and Irish trading locations for potential closure, while requesting a reduction in rental costs and revised lease terms across 194 locations. 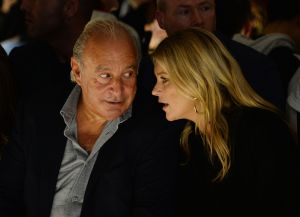 The stores that are set to close employ 520 people, and Arcadia said it would make every effort to redeploy affected colleagues within the business where possible or make redundancy payments.

The remaining 349 locations, including the Topshop/Topman flagship in Oxford Circus, will be unaffected by the proposals, Arcadia said.

In the U.S., Arcadia said it would restructure in line with the strategy to deliver its offer through its wholesale partners and digital platform. Topshop is sold through Nordstrom in the U.S.

As a result of the restructuring, the group said it has commenced a process “that may result in the closure of all 11 Topshop/Topman stores in the US.”

As reported last month, after a seven-year partnership aimed at turning Topshop into a booming U.S. business, Leonard Green & Partners sold its 25 percent stake in Topshop/Topman back to Arcadia, and confirmed that its directors had resigned from the Topshop/Topman board.

According to unconfirmed media reports, Leonard Green sold the stake back for just $1, reflecting the state of Philip Green’s retail empire.

No U.K. or Irish trading locations will close in the short term, and employees and suppliers will continue to be paid on time and in full, Arcadia confirmed.

As part of the CVA proposals, Tina Green, Philip Green’s wife and the group’s main shareholder, will invest 50 million pounds of equity into the group, in addition to the 50 million pounds in funding provided in March to support Arcadia’s turnaround plans.

Tina Green has also agreed to provide all affected landlords with an entitlement to a pro-rata share of 20 percent of any equity value in the group upon a future sale. Landlords will also be able to claim against a 40 million pound compromised creditor fund, and will not suffer any compromise of dilapidations on occupied stores.

Arcadia also said it was in talks with the trustees of its two largest pensions schemes, as well as with the Pensions Regulator and the Pension Protection Fund.

The insolvency would mean reducing pension contributions from 50 million pounds to 25 million pounds a year, for three years, with security over certain assets being granted in order to provide support to the schemes.

Arcadia is seeking creditor approval of the proposals at meetings set for June 5. In the meantime, all U.K. and Irish trading locations will remain open and trading as normal while the group’s online sales channels will be unaffected by the proposed changes, the company said.

The proposed insolvency comes on the heels of multiple dramas in the house of Green.

Earlier this month, The Sunday Times Rich List 2019 said Green’s net worth fell by more than 1 billion pounds to 950 million pounds. It pointed to the pension debt at Arcadia, the planned store closures, and the restructuring, and said it considered Green’s Arcadia retail group to be “worthless.”

Last year, a handful of Arcadia employees accused Green of impropriety, bullying and harassment in the workplace, which he robustly denies. The accusations were published as part of an investigation into Green by The Daily Telegraph.

Arcadia isn’t the first of Green’s retail properties to fall on hard times.

In 2017, after months of mudslinging, accusations and a parliamentary hearing, Green agreed to fill the pension fund hole at his former company, the defunct clothing and home retailer BHS, writing a check for 363 million pounds.

Two years before, Green had sold the ailing BHS to Dominic Chappell and his consortium for 1 pound — and the company eventually collapsed. By the time it was wound down some 11,000 jobs were lost and 20,000 pensioners were left wondering how much they were going to be able to collect — and who from.