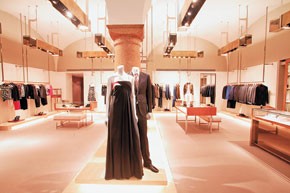 The luxury goods house is forging ahead and reaching out to new markets with the opening of stores in cities as diverse as Prague, Macau, Cape Town and Auckland, New Zealand. Gucci chief executive officer Mark Lee said the pursuit of a well-balanced network of boutiques is a priority for the company.

The ongoing retail openings come as Gucci has hit turbulence in its own growth, stemming from what executives say is a lack of enough “midrange” products. In the first quarter, Gucci brand sales slipped 3.3 percent to 513 million euros, or $769.5 million at average exchange.

“Retail is 70 percent of our business. We seize new opportunities, but at the same time, we further develop Gucci’s historic boutiques and consolidated markets,” said Lee, citing as an example the new three-level, 46,000-square-foot Fifth Avenue store in New York, which opened in February.

As in New York, the goal in Prague, which opens this week, and in other new markets is “to focus on the local customer base,” said Lee. Banking on Gucci’s strong international brand awareness, the company is targeting consumers who are well-educated in fashion in markets that were under the radar until a few years ago.

Lee said after tackling Russia, Gucci is now moving into other Eastern European countries. “Prague is exciting,” said the executive, adding the company will open a store in Budapest later this year. Lee said the company had been looking at Prague for a number of years, failing to scope out the right location until now.

The boutique, Gucci’s first in the city, is in the prestigious Paríská Street. Located in a historical building that dates back to 1904 and was designed by famed Czech architect Jan Verjrych, the 3,800-square-foot store on one level allows the firm to present its full range of products.

“This is one of the most dynamic and promising areas in Eastern Europe,” Lee said.

In Cape Town, which Lee described as “one of the most beautiful cities in the world,” the Gucci boutique, which opened early this month, is set on the waterfront. Located in top luxury mall Victoria Wharf Shopping Center, the 2,551-square-foot store has “a tremendous view on the sea, with a balcony,” said Lee. The brand already counts one boutique in Johannesburg, but this is its first in Cape Town.

Gucci’s first boutique in Macau also opened this spring and is located in luxury resort Wynn Macau, covering 2,588 square feet. Lee said Macau is “one of the most promising luxury markets in Asia-Pacific,” which is Gucci’s fastest growing region. A second store is slated to open in Macau in 2009.

The executive said the opening in Macau “is consistent” with Gucci’s development in greater China, which is showing “no signs of slowing down” and has the fastest growth compared with other markets. In the last quarter of 2007, sales in China grew 120 percent. Gucci counted 16 stores there at the end of the year, and it has already added more this year. “Just how rapid the development was is best exemplified by the fact that we had four stores in China in 2004,” said Lee.

Another first-ever store in New Zealand opened in late April in Auckland. After dipping its toe in duty free in the market, Gucci’s own boutique is “a natural extension” for the brand, said Lee. The 3,000-square-foot shop is located in the heritage Imperial Building, on Queen Street, which is fast becoming a luxury shopping area.

Lee said that, while “2008 poses challenges in terms of macroeconomy and currency exchanges,” Gucci would stay the course. “We run Gucci with a long-term vision, we stay focused on the customers and the product to create desire,” said Lee.