But investors are disappointed by sales figures and Asian business.

Guess Inc.’s styles are finding fans in Europe and the Americas. But it might take some time to convince investors.

After a turbulent year — which included sexual misconduct allegations against one of the founders and continued tariff tensions between the U.S and China — the retailer revealed quarterly results Tuesday after the bell, improving on top and bottom lines..

For the three-month period that ended Nov. 2, total company sales were $615.9 million, up from $605.4 million. Profits also rose to $13.5 million, a noticeable difference from last year’s third-quarter loss of $12.8 million.

But revenues came in below analysts’ expectations and the stock, already down nearly 20 percent year-over-year, fell another 4.6 percent $18.20 in after-hours trading.

Even so, Carlos Alberini, chief executive officer, said he was pleased with the quarterly results, pointing out that the company’s earnings and earnings per share were well above expectations.

“Overall, the strength of our businesses in Europe, Americas’ wholesale and licensing, combined with a disciplined and effective approach to manage our costs, enabled us to more than offset softness in our Americas retail and Asia businesses in the quarter,” Alberini said. “For the full year, we are maintaining the high end of our guidance and raising the low-end. This speaks to the strength of our global brand and the power of our diversified business model, which provides us with multiple levers to continue to increase revenues and improve profitability.”

The ceo added that some of the headwinds the company faced were geopolitical, such as the continued protests in Hong Kong.

“The softness in Asia has been with us for a few quarters,” Alberini said on Tuesday evening’s conference call with analysts. “These changes leave us to believe that something is playing out at a macro level.

“But there are a lot of things that are totally in our control,” he added. “We should have had more newness and product online and in stores, but we were affected by past inventories. Our inventory could have benefited from more depth and breadth. We are fixing this now.”

In addition, he said there is a need for more “localized marketing” in places such as China, Japan and South Korea, and use of local influencers to drum up excitement around the brand.

“At the end of the day, we have to look at the long-term potential for Guess in Asia,” Alberini said. “The opportunity for growth is incredible. The brand is well known and resonates with the Asian consumer. It’s disappointing to look at the current slowness. But if you look at the size of the market, it’s a $13 trillion market. The middle class in China is the biggest in the world.” 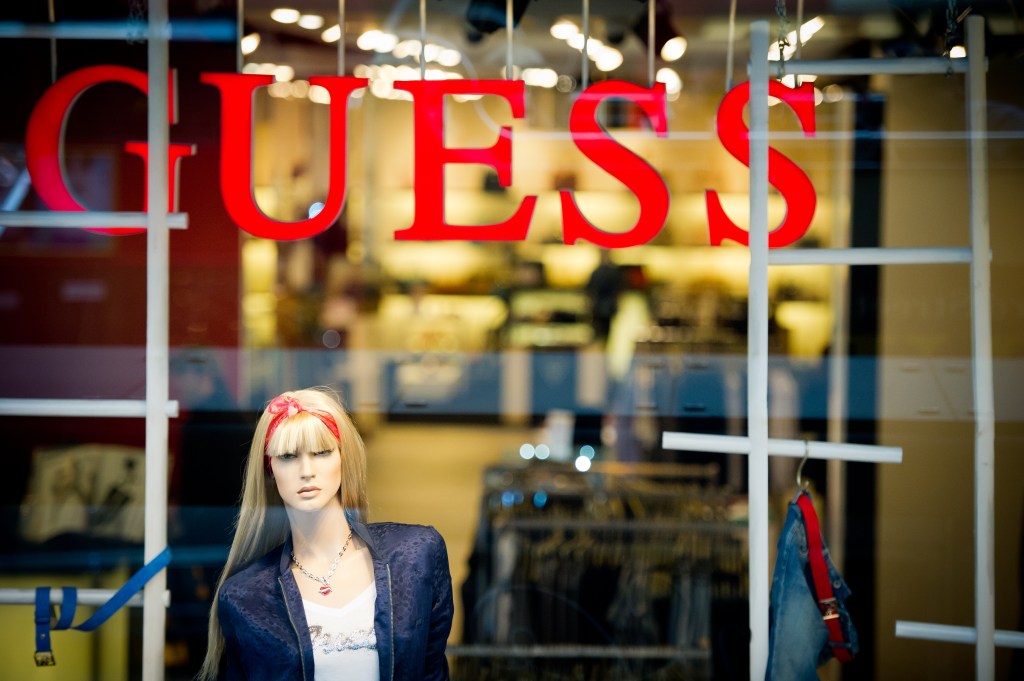 Traffic, meanwhile, was down across all regions for the quarter. Alberini said as store leases come up for renegotiation, the company will evaluate each location.

“Every store has to stand on its own,” he said. “But we are pleased with the store base and what we have.”

As of Nov. 2, the men and women’s apparel, accessories and footwear company owned and operated 1,174 Guess retail stores throughout the Americas, Europe and Asia. And, in addition to the e-commerce business, the company also sells to wholesale partners throughout the world.

Meanwhile, Europe was a bright spot in the business. Total revenues in the region increased 9.1 percent in U.S. dollars. Retail comps, including the e-commerce business, increased 1 percent for the quarter.

In a research note, Jefferies analyst Janine Stichter said Guess has been able to capitalize on its status as a retro brand, selling merchandise with logos to younger consumers.

“We are very pleased with our performance across all markets and channels in the region” said Alberini, who moved into the role of ceo last January, after replacing former ceo Victor Herrero.

Alberini had previously served as Guess’ president and chief operating officer between 2000 and 2010, but left to join Restoration Hardware as co-ceo until 2014. He later went on to be appointed chairman and ceo of Lucky Brand.

At the time of his appointment, Guess said cofounder Paul Marciano would retain his position as creative chief, despite being accused of sexual harassment by model and actress Kate Upton, among others, last year.

Guess will hold an Investor Day in New York on Dec. 3.