At the year's midpoint, the bears roared. 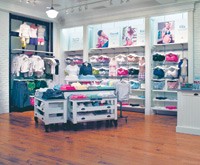 Asics Back in the Black in First Quarter

NEW YORK — At the year’s midpoint, the bears roared.

The WWD Composite Stock Index was down 1.1 percent at the end of June as investors pulled out of the retail and apparel sectors on worries of the negative impact of higher fuel costs, sagging consumer confidence and higher interest rates on business despite solid economic growth in the first half.

For the second half of the year, turmoil in the Middle East could drag stock valuations down further, some analysts said. The WWD Index is already off 9 percent since the beginning of July. The war in Lebanon has raged since July 12.

But investors may line up behind certain companies in the retail and apparel sector, analysts predicted, following rising consumer confidence and robust earnings reports from suppliers such as LVMH Moët Hennessy Louis Vuitton, PPR and Bulgari.

Regarding the overall market, there’s a sense from the more bullish investment strategists that valuations are at bargain levels right now.

Steven Sheldon, principal of SMS Capital Management, said “a serious shopping spree may be in order for bargain-oriented investors.”

In his midyear market report, Sheldon “reaffirmed his call for the second consecutive year of modest gains for the S&P 500 Index, and suggests that investors use further weakness or a deepening correction in U.S. equity markets as a longer-term buying opportunity,” the report stated.

“With six months left in the year, a lot can and will happen,” Sheldon said. “I now like the odds of the S&P 500 Index finishing the year on the upper end of my range [of plus 5 percent], as a result of corporate earnings coming in stronger than expected.”

Sheldon said he expects the market to pull back further in the next few months, but said he believes “investors should use a major correction as a buying opportunity heading into 2007.”

An end to the Federal Reserve’s interest rate hikes, “and the coming and going of midterm elections…should enable market multiples, which have steadily contracted over the last two years, to start expanding next year.”

In the first half of this year, stock prices were mixed. Through June 30, the WWD Composite Index was weighed down by steep declines in the valuations of Revlon, which was down more than 59 percent; New York & Co., which was off 54.85 percent, and Chico’s FAS, which was down over 37 percent since January.

Surprisingly, of the 84 retail and vendor stocks that make up the index, 48 were up by midyear and 36 were down. Of the stocks that showed gains, 21 had increases since the beginning of the year of over 20 percent. Still, the losers outweighed the winners, and the index ended up showing a decline.

Midyear gainers with larger market capitalizations include: Kohl’s, up 24.8 percent; VF Corp., up 23.45 percent, and American Eagle Outfitters, up over 46 percent.

The top gainers tended to be retailers and suppliers that have recently repositioned themselves in the market by making acquisitions, divesting themselves of unprofitable brands or rolling out new concepts. These are also companies that have surprised Wall Street.

Take VF Corp., for example. The company has posted 10 consecutive quarters of record sales and earnings, surprising at least one equity analyst each time. Earlier this month, the company kept the momentum going in the second quarter with a rebound in its Lee jeans business and double-digit gains from the Vans and North Face brands. VF Corp. beat Wall Street earnings estimates by 2 cents.

“[Our transformation] is playing out just as we outlined it two years ago,” said Mackey McDonald, chairman and chief executive officer, during a conference call with analysts. “The even better news is, we’re achieving growth across most of our businesses.”

Looking ahead, the companies in the specialty retail sector appear to face the most challenges. But these firms could also shine the most.

Vivian Ma, equity analyst at CIBC, sent out a research note following CIBC’s Sixth Annual Consumer Growth Conference. She said attendance was high at the conference, “despite investors’ concerns over macro risks to the retail sector.”

“In our view, gas prices will curb consumer spending in the short term, but cooling of the housing cycle may have bigger longer-term impact,” she said adding that within the hard-lines segment, home goods firms will be hit the hardest. “We sense that the promotional environment will heat up as the performance gap between the stronger and weaker players will widen,” Ma predicted.

Ma’s bottom line for investors: “Be selective and look for value among the best operators with strong brands and-or differentiation.” In apparel retailing, Wall Street is closely watching the current back-to-school season for winners and losers.

“For Chico’s, the Finish Line, and Urban Outfitters, we are lowering our price targets based on our current research that suggests sales trends at all three companies have not improved following recent disappointments,” Mager said.

Chico’s and Urban Outfitters are both components of the WWD Composite Stock Index. Each company suffered declines by midyear; Chico’s fell 37.4 percent and Urban, 29.9 percent.

“Given rising macroeconomic headwinds, we believe there is a greater chance that sales and margins at these companies will worsen versus the chance of material improvement,” Mager said.

So who will turn around in the second half? Analysts say keep an eye on the strong brands.

One stock on the WWD index and on Mager’s radar that showed a decline at midyear was Coach Inc. The stock lost 10.2 percent by the end of June. Investors dropped it due to a high price-to-earnings ratio and other metrics, Mager said. Then the analyst built a case for a stock price turnaround.

“After growing over 30 percent for 17 consecutive quarters, our research suggests Coach is poised to deliver strong top-line and at least 25 percent [earnings per share] growth once again,” she said in a research note Friday. “Our in-store and on-line channel checks, as well as positive data points from key competitors and customers both in the U.S. and abroad, support our view.”

As a result, Mager raised her fourth-quarter EPS estimate on the company to 29 cents, which is just above the company’s own guidance of at least 28 cents.