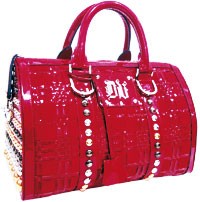 The Italian accessories business is booming despite a strong European currency, and American visitors shopping in the poshest stores seem unfazed by the weak dollar, selecting the most precious, high-end and unusual items.

“We have sold out all our top-level luxury handbags at around the $2,000 mark,” said a Versace spokesman, adding that Americans may be “buying fewer units than in the past, but they tend to buy the key item, usually the most luxurious [and therefore costly] pieces.”

While Versace’s best-selling bag continues to be the Biker, its new “Snap out of it,” a revisited doctor’s bag adorned with sequins and studs, is also selling “particularly well,” said the spokesman, who also said customers are hungry for add-on embellishments that make each bag special, such as clips or light-holders.

A Prada spokesman was equally pleased with the performance of the company’s accessories division, and he said bestsellers are exclusive crocodile bags, or those made with a precious leather treated so that it acquires a vintage effect. As with Versace, the Prada spokesman said the brand’s Tricks, tiny hardware robots that are applied to the bags, are big hits with customers who want to personalize their bags.

American customers are flocking to the new Milan accessories store in Via Spiga and to Prada’s new store in Capri dedicated to this division. “In Capri, our clerks are amazed because many Americans are buying without looking at the price tag,” said the spokesman.

“This is a good moment for accessories,” said Rosi Biffi, owner of six stores in Milan, including Biffi and Banner, which carry accessories from Gucci, Hogan, Tod’s and Fendi among others. Biffi attributed this success to the dazzling variety of styles and imaginative product diversification. “Bags are more tempting today — they come in all shapes, sizes and colors,” she said.

Armando Branchini, a luxury goods analyst here, agreed with Biffi. “This is the most alive category at the moment, the one that fashion houses tend to innovate the most, with an extraordinary variety and constant output of new models to meet the consumer’s demands.”

Fulvia Visconti Ferragamo, in charge of the accessories division at the Florence-based luxury goods company Ferragamo, said the company’s handbags business has grown 10 percent from last year, and its silk scarves business has increased 20 percent. “Perhaps because they have become a versatile element of fashion, worn as bandannas, belts, or even mobile-holders,” she said.

An upbeat outlook came both from a brand traditionally associated with accessories, Fendi, and one that has expanded this division over the past couple of years, Giorgio Armani. Fendi has registered double-digit growth, and said hits for the summer are the new Compilation bag, together with the evergreen and handmade Selleria bag.

“Discount sales are going well, but it is interesting to see the growth especially in full-price sales,” said a Fendi spokeswoman. An Armani spokeswoman said the brand’s accessories are selling briskly and the company has registered a 34 percent increase in sales worldwide with the spring-summer collection. The spokeswoman said the “strong euro is not affecting us,” and pointed to the designer’s pleated leather bag as the label’s best-selling piece this summer.

However, other executives were more cautious. Simone Badioli, chief executive of Pollini, owned by Italian manufacturer Aeffe, which controls Alberta Ferretti and Moschino among others, said he has noticed “a reduced presence of American tourists in Milan,” and “the attention to price was not an issue in the past, when the dollar was stronger.” This notwithstanding, Badioli said Americans “are still buying our handbags because they appreciate the look, the style and the quality of our products.”

Claude Arpels, who controls the Redwall Group and brands Alessandro Dell’Acqua and Borbonese, an accessories company with a ready-to-wear collection, both designed by Dell’Acqua, said as the number of American tourists has “moderately dropped” during 2004 also because of the strong European currency, “most loyal American clients have opted for carefully choosing purchases.”

Arpels said he has noticed they would rather take advantage of discounted items. Borbonese’s best-selling merchandise are summery canvas bags, those in nylon ribbed with the brand’s trademark bird’s-eye pattern or in leather. Arpels said consumers are still focusing on details and finishings as they look for special and “recognizable” goods.