Investments Drag Down Net at H&M

The retailer is gearing up for the launch of its future brand, & Other Stories, scheduled for this spring.

By Joelle Diderich and Julia Neel on January 30, 2013
View Slideshow 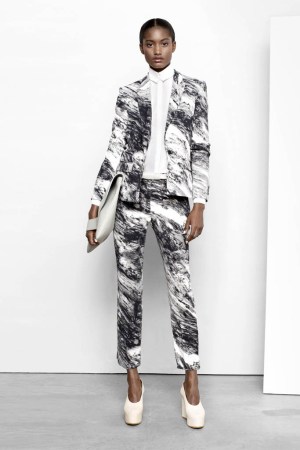 PARIS — Hennes & Mauritz AB said Wednesday that net profits fell 1.3 percent in the fiscal fourth quarter, as the retailer countered disappointing sales with increased investments in areas including online sales and the launch of its future brand, & Other Stories, scheduled for this spring.

The company posted a profit after financial items of 5.3 billion Swedish kronor, or $795.2 million, in the period between Sept. 1 and Nov. 30. All dollar rates are calculated at average exchange rates for the period in question.

“H&M continues to stand strong in a challenging clothing market which in many countries has been even more challenging in 2012 compared to 2011,” asserted H&M chief executive officer Karl-Johan Persson.

The retailer expects to break the symbolic barrier of 3,000 stores worldwide in 2013, and is also investing heavily in IT and broadening its product range.

“These long-term investments have created cost increases and to a great extent have not yet generated any revenue. However, we consider these investments to be both necessary and wise as they aim to secure future expansion and profits and thereby further strengthen H&M’s position,” Persson added.

Jyrki Tervonen, chief financial officer, said the high level of spending would continue this year. “Aggregated, the long-term investments in 2013 will be on a high level and on an even higher level than in 2012,” he said in a telephone conference call.

Separately on Wednesday, Samuel Fernström, head of & Other Stories, was in London to unveil a snippet of the first collection.

Ateliers in Stockholm and Paris, staffed by designers who have come from backgrounds at APC, Isabel Marant, Sonia Rykiel, Cerruti, Acne and Lanvin, work in four separate design teams to create four individual “directions” within the larger collection. Each corresponds roughly with a stylish city — Stockholm, Berlin, Paris and New York — and will be merchandised separately in the stores, along with large accessory and beauty departments.

“We will organize it like a wardrobe to make it possible for a customer to do it her own way,” Fernström explained. “She might wear a floral dress from Poetic & Dandy with a leather jacket from Industrial & Effortless,” he said, referring to the names for the Paris- and Berlin-inspired ranges.

Industrial & Effortless, for example, is tough and centered on the leather jacket, while Poetic & Dandy is the most feminine offering, melding romantic themes with subtle masculine details.

The brand & Other Stories started life as a beauty label, but Fernström and his team felt there was more scope to explore a larger concept. “We wanted to empower this woman,” said Fernström. “To give her a full wardrobe. So the accessories were really important.” A presentation to Persson resulted in a green light to continue exploring the idea.

There is an in-house team of chemists who have created the skin-care, bath and body, and makeup offerings. Byredo founder Ben Gorham is the cocreator and fragrance director for the bath and body range, which has scents including rose, fig and Moroccan tea. Makeup artist Lisa Butler is on board as cocreator and color director.

The brand will open eight stores this spring in London, Paris, Copenhagen, Milan, Barcelona, Stockholm and two in Berlin, as reported.

In addition, H&M this month launched a mobile-adapted H&M shop in its eight existing online markets in order to meet rapid growth in shopping via smartphones and tablets, while its Weekday banner introduced e-commerce in 18 countries on Wednesday.

As previously reported, H&M posted net sales of 32.5 billion kronor, or $4.9 billion, in the fourth quarter, unchanged in comparable terms.

In 2012 as a whole, sales suffered in Greece, Spain and Italy, where government austerity programs have prompted consumers to retrench, the retailer said. The strongest performers were China, H&M’s fastest-growing market last year, the U.S., Canada and Russia, it added.

H&M indicated overall sales remained soft into the new year, forecasting that revenues in local currencies will rise 5 percent in January year-on-year, versus an 8 percent increase in December. “From mid-January onwards, sales were negatively affected by very cold weather in many of H&M’s markets in Europe,” the company noted.

As a result, markdowns in the first quarter are likely to remain stable at 2012 levels.

The retailer reported net profit for the full fiscal year rose 6.6 percent to 16.87 billion kronor, or $2.54 billion, hit by its long-term investments and by negative currency effects of around 290 million kronor, or $43.6 million, largely due to a sharp appreciation of the Swedish currency against the euro in the fourth quarter.

H&M’s gross margin, a key indicator of profitability, stood at 59.5 percent in 2012, down from 60.1 percent a year earlier, impacted by factors including cotton prices, cost inflation and the strength of the U.S. dollar, H&M’s principal purchasing currency.

“Over the long term, we remain concerned by the competitive pressure from other value apparel retailers and are increasingly skeptical that margin expansion can be delivered in 2012-13 despite easy comps and input cost tailwinds,” they said in a research note.

H&M expects to add 325 stores in the 2012-13 financial year, including its first units in Chile, Estonia, Lithuania, Serbia and Indonesia.

In addition to launching online sales in the U.S. this year, it plans to open a flagship on Fifth Avenue in New York, which will be its largest store worldwide, and another in Times Square. The company also sees room for expansion in China, Russia, Germany, the U.K., Italy, Poland and France.

All of the banners will continue their expansion in 2013. COS is set to open its first stores in Oslo and Dubai in the spring. Meanwhile, Monki and Weekday are to open their first branches in Japan. Monki and Cheap Monday are also set to unveil their first units in Paris this year.