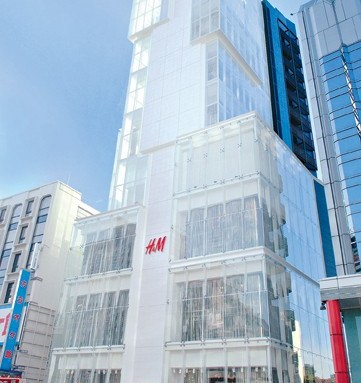 The openings continue aggressive expansion plans by all the major fast-fashion retailers, from Zara to Uniqlo. With competition in more mature American and European markets stiffening and economies in recession, fast fashion is looking to expand in new growth markets around the world, from China to the Middle East.

And these store openings already are contributing to growth. H&M on Thursday reported a 13 percent increase in aftertax profits for 2008 to 15.29 billion Swedish kronor, or $1.89 billion at average exchange, beating most analysts’ expectations. Sales for the year reached 88.53 billion kronor, or $10.94 billion, up 13 percent.

But the recession is having some impact. Sales in the fourth quarter hit 26.31 billion kronor, or $3.25 billion, up 15 percent, boosted by store openings around the world, including H&M’s first stores in Tokyo. On a like-for-like basis, however, sales in the three-month period shrank 3 percent, underscoring the challenging holiday season for retail across Europe and America. Like-for-like sales for the year fell 1 percent.

H&M said sales in December rose 3 percent, and that it expects sales in January to increase 8 percent.

“It goes without saying that H&M has been affected by the global business cycle,” Nils Vinge, H&M investor relations manager, said on a conference call.

But Vinge said H&M viewed the current environment as a moment to accumulate market share and that the group would continue to expand with the aim of opening 225 stores and adding as many as 7,000 jobs this year.

Vinge said H&M will open its first stores in Beijing in March. He said China’s potential for H&M is “enormous.”

The majority of H&M’s new stores this year are being planned for the U.S., France, Italy, Spain, the U.K. and Germany, he said.

H&M plans to continue to expand its new COS chain that features more expensive clothes, and Vinge said the firm would launch H&M Home next month. H&M Home first will be launched through catalogue and online sales in Nordic countries, the Netherlands, Germany and Austria — countries where H&M already has established catalogue and e-commerce operations.

Meanwhile, Vinge said H&M would open two stores in Moscow this spring and that a third Moscow store had been signed for the fall. He said H&M also would open its first store in Saint Petersburg next year.

“The Russian market has great potential,” he added.

Vinge said H&M would continue to expand in Japan, where new stores in Tokyo significantly beat the firm’s expectations. Those stores made “record” sales in the first two months, he said, helping beef up H&M’s end-of-the-year numbers.

“The success of our stores in Japan shows that our business concept is global,” said Vinge.

Recent sales results in Europe have proved mixed, with better-than-expected sales coming from the U.K. and “OK” sales in Portugal. Vinge said sales in Italy and Spain, which is suffering badly from the credit crisis, have been weak.

Vinge declined to say how long H&M thought it would take before the economic climate improved. Nonetheless, he said the retailer is gunning for “positive like-for-like” sales growth for the year.

Mango, meanwhile, said it expects revenues this year to grow by 5 percent to 1.5 billion euros, or $2 billion. The firm’s store-opening program includes cities such as Dubai, Kuwait, Moscow, Paris and New York. The Barcelona-based Mango operates a total of 1,229 stores in 90 countries, including company-owned and franchised units. Last year Mango opened 130 stores worldwide, including 26 in Spain and others in the Middle East and Asia, including in Algeria and Georgia.

The countries are all part of the retailer’s drive to plant its flag around the world. Mango, which already has 45 stores in China, plans to open 10 stores in Iran over the next five years. The chain also is opening in Senegal, Belarus and Argentina. Mango even plans to open a store in Iraq.

Isak Halfon, Mango’s president of expansion, said last fall that the Middle East already accounts for 9 percent of Mango’s turnover. “We have 22 stores in Israel and we’re opening two stores in Lebanon,” he said.

Inditex, owner of the Zara chain, operates 231 stores in the Middle East, mainly in Saudi Arabia, Israel, United Arab Emirates, Kuwait and Lebanon. H&M is present in Dubai, Kuwait, Qatar, Saudi Arabia and Bahrain. It will open its first store in Oman in October.

The Far East is another focus for both Mango and Zara, with China being one of the key strategic growth markets. “China is changing its retail philosophy,” said Halfon of Mango. “Salaries are increasing. The Chinese are shopping. They didn’t before.”

Halfon noted that China hopes to count 400 million middle-class consumers — out of a population of 1.3 billion — by 2018. “We are doing well in China. And we are opening about 30 stores a year in Asia Pacific,” he said.

Since Inditex opened its first Zara store in Tokyo in 1998, it has opened more than 100 stores in eight Asian markets — Japan, China, South Korea, Indonesia, Thailand, the Philippines, Malaysia and Singapore.

“There is great interest in fashion [in Asia],” said Jesus Echevarria, head communications officer at Inditex. “The aim is to increase the commercial area in the region at a rate that is more than double the average growth globally [for Inditex store openings].