Mass merchants always count on the last-minute holiday rush to make sales goals. They'll be doing the same this year, hoping that the extra day between...

By Faye Brookman and Molly Prior on December 14, 2007
View Slideshow 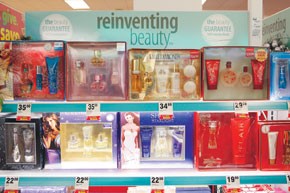 Mass merchants always count on the last-minute holiday rush to make sales goals. They’ll be doing the same this year, hoping that the extra day between Thanksgiving and Christmas will help them meet projections.

With worries over the economy looming, most buyers planned for slight increases in beauty sales in the 2 to 4 percent range. Several buyers said their overall sales were up in dollars but were slower in sell-through, suggesting consumers are buying higher-ticket items. Some chains were happy with the start of the holiday season; others were panicking. In addition to the economy, some chains said the weather had not helped — too warm to inspire the holiday mood in some regions and too treacherous to go out and shop in others.

Industry consultant Allan Mottus said the consumer has been “pulled because of economic insecurity.” He added that consumers continue to wait until the last moment to get prime discounts. “Consumers are trained to wait, and this year it is killing retail margins. It will go into the last moment before drug, food and discount stores know what their sales picture for the holidays was, but the worst part of the equation is many won’t know how bad their earnings are if they go right into Dec. 24 discounting like crazy.”

The National Retail Federation predicts overall holiday spending will be limited to a 4 percent increase this year, totaling $474.5 billion. NRF chief economist Rosalind Wells said consumers will be forced “to be more prudent with holiday spending.”

One notable point is that holiday has shifted and is not as important as it was years ago. According to the International Council of Shopping Centers, the two-month period represented 25 percent of volume 15 years ago, but is down to 22 percent now. Gift cards are one reason that it is lower, as shoppers can put them to use months after receiving them. Surprisingly, some merchants think gift card sales — although still expected to top $80 billion — could slow this year as consumers look for more personal choices. That’s a good news/bad news scenario for mass merchants. The thought is that some shoppers will pick a cosmetics or fragrance gift rather than a card. However, food, drug and discount stores have done a phenomenal business over the past few years with gift cards to their stores, but also to other mall-based retailers.

Once again, beauty buyers found themselves competing with electronics for a share of consumer spending. “People are either buying electronics or shopping online,” lamented a senior category manager for a top drugstore chain.

Mottus said fragrance sales are slow to start and makeup is competitive based on discounts, catalogues and circulars. “Drug chains are offering specials. Duane Reade has a Sephora-like catalogue,” he said. To inspire fragrance purchases, Coty offered 99 cent carded salable samples of its scents such as Nautica and Glow.

There were a few bright spots. Licensed merchandise had early hits, a trend driven by the fact that shoppers were fearful that the items would sell out as well as the desire to buy items for kids earlier than other gifts. Judy Wray at Rite Aid said “Hannah Montana” and “High School Musical” products were strong consumer pulls. Hannah Montana and High School Musical fragrance sets are so hot they are being featured on eBay.

Traditional blockbusters also were loaded at chains such as Target, Wal-Mart and CVS. Target, for example, had kid-themed sets featuring Disney Princess, Hello Kitty and other characters, from Townley and Cosrich. CVS had an endcap with beauty collections stocked at the opening of its huge flagship in Manhattan. While standing in the newly opened store late last month, CVS’s Deb Armstrong, divisional merchandising manager for beauty care, said holiday sales got off to an early and strong start.

“Shoppers are buying early because of the deep values,” she said, citing what CVS is calling the “It” bag as an example. The oversize floral fabric and fake-croc makeup bags are filled with holiday-themed bath products from CVS’s Essence of Beauty private label line — billed as an $80 value for $14.99. At CVS’s Essence of Beauty endcap, the retailer has added limited edition scents such as Sugar Plum and Naughty or Nice, a ginger flavor. The lineup mirrors Bath & Body Works’ look and feel.

Once again, CVS was also the exclusive retailer for Wet ‘n’ Wild Paint Can, filled with trial-size nail polishes for $4.99. The full-size versions of each polish color also can be found in the Wet ‘n’ Wild assortment, said Shawn Haynes, senior vice president, marketing and global brand development, of Markwins. For Walgreens, Wet ‘n’ Wild created the Shimmering Night brush, a shimmer powder housed in a decorative brush. Both items are selling briskly, said Haynes.

According to Markwins’ Matt Allen, a big question retailers are seeking to answer is if there is as much self-purchasing of cosmetics this year. “It will be interesting to see if people are buying as gifts and for themselves,” he said.

Another early bright spot for some were bath gift sets. Perhaps Americans have finally worked their way through all the bath items they purchased in the Eighties and are once again inspired to buy bath products. Target had an endcap devoted to scented products including peppermint lip gloss in tins and peppermint bath additives. The set was an exclusive from Markwins for Target. Prices ranged from 99 cents for a tin of lip gloss to $19.99 for a bath gift set. Target also featured two youth Markwins programs on ends — Glam Girl and All That Glitters.

Several cosmetics manufacturers used creative ways to attempt to make color cosmetics more giftable. At Jane & Co., for example, a makeover in a box that was a big hit last year has been formulated with minerals this year and is flying out of stores, according to company president Lisa Yarnell. Other manufacturers also created special cosmetics gift sets, especially featuring minerals, to inspire gift giving and purchasing of color cosmetics.