How Kering Plans to Fix Gucci in 2021

The French luxury group is betting on an "always on" strategy of digital storytelling and events to reboot its underperforming star brand.

PARIS — When Gucci released its collaboration with The North Face last month, 1.7 million people registered for a raffle providing early access to the collection, causing the brand’s site to briefly crash. So why is Kering’s star brand struggling to keep pace with its sector peers?

Gucci’s disappointing performance in the fourth quarter sent Kering shares tumbling by 7.1 percent on the Paris Stock Exchange on Wednesday, putting Kering chief executive officer François-Henri Pinault on the defensive, although the executive insisted he was confident in the brand’s prospects as it celebrates its centenary in 2021.

“The beginning of the year is very, very encouraging at Gucci,” Pinault told analysts on a conference call. “We were ambitious and we are very satisfied with what is happening right now.”

The coronavirus pandemic wasn’t to blame solely for the underperformance of Gucci, which posted a 10.3 percent drop in organic sales in the fourth quarter, representing a worsening compared with the prior quarter, and missing the consensus estimate for an 8 percent drop put forward by analysts.

“We expect market pressure to increase on Gucci to produce efforts aimed at reinstating momentum,” Luca Solca, analyst at Bernstein, said in a research note on Wednesday.

While the brand bore the effects of widespread store closures and a sharp drop in tourism, part of its woes stem from its decision to accelerate a new strategy that involves cutting back its wholesale network, and switching investment from a handful of high-profile fashion shows to a speedier pace of digital storytelling and events.

Although the initiative was first outlined in 2019 in response to the normalization of Gucci’s previously stratospheric growth rates, it will come into full effect this year — and Pinault expects it to deliver results rapidly.

“The lockdown has given Gucci an opportunity to draw a corrective path for the coming years, starting with the centennial in 2021, carrying forward the brand’s momentum,” he said.

“Having successfully established its unique universe in terms of aesthetics and expression over the past five years, Gucci can now concentrate its major creative initiatives on two key moments of the year,” he continued.

“At the same time, the brand will implement a new ‘always on’ cadence of activities, unleashing even more resources for in-store and digital merchandising events, pop-ups and pop-ins, capsule collections — either global or tied to specific events or regions — and powerful creative collaborations,” Pinault said.

To be sure, the brand still has heat. In the third quarter of 2020, it reclaimed the top spot in Lyst’s ranking of the world’s most-searched brands for the first time since the second quarter of 2019, coming ahead of Off-White and Nike. Page views for Gucci were up 52 percent in the third quarter year-on-year, the shopping platform reported. 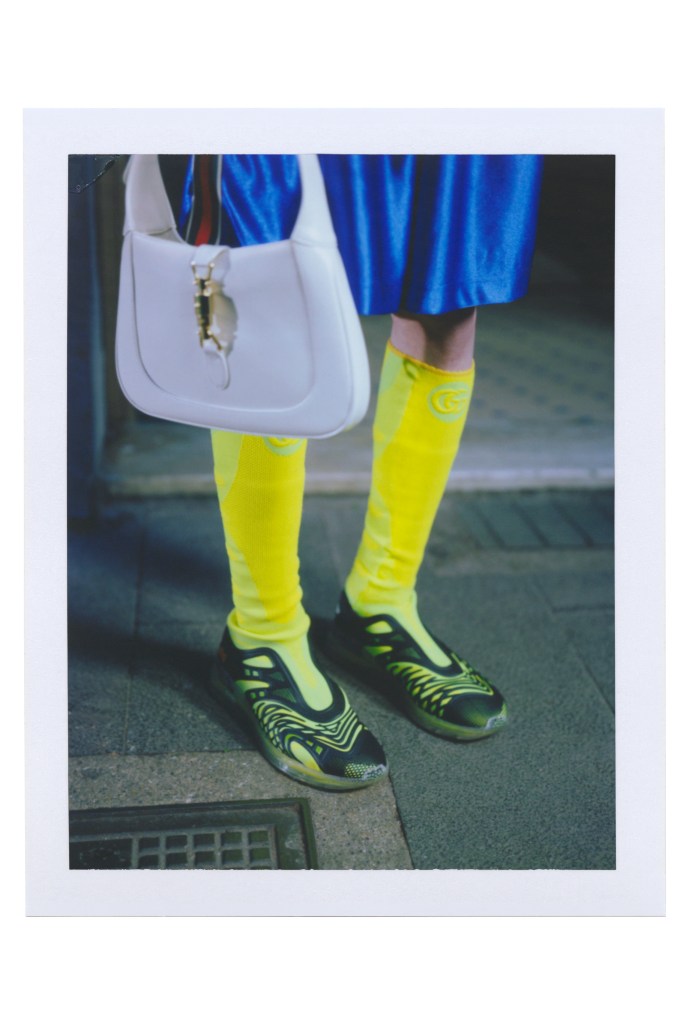 Gucci’s seven-part film for its spring collection, developed by creative director Alessandro Michele with acclaimed American director Gus Van Sant, drew 200 million views in its first week online in November, according to Pinault. The next collection is due to be unveiled in April.

To mark its anniversary year, the brand plans to focus on signature styles. Among products in the pipeline, Pinault touted the reformatted Bamboo shopper, set to hit stores in June, following the successful relaunch in September of the Jackie 1961 handbag.

Since Michele took over the creative reins at Gucci in 2015, transforming fashion with his baroque, androgynous aesthetic, the brand has relied heavily on Chinese tourists to propel sales. As Gucci pivots to courting local consumers, it is promoting more exclusive products such as high jewelry and watches, precious skins and custom orders.

Worldwide, Gucci is leveraging a variety of different retail concepts, even as it resumes its previously planned schedule of store renovations, disrupted by the pandemic. The brand is using apartment-style pop-up spaces to engage with prime clients, and is expanding a flagship concept based on its Wooster Street store in New York City, opened in 2018, featuring locally tailored events.

The company plans to hold around 150 events worldwide around its Gucci Pin pop-ups in 2021. In China alone, 600 physical and digital events are scheduled this year, Pinault said.

Meanwhile, Gucci’s customer service centers in Europe have introduced new measures such as distance selling, video calls, private phone calls and consignments. “We had a very strong reaction from our clients in Europe, growing the local customers significantly last year in all brands, thanks to those initiatives,” Pinault said.

Nonetheless, retail revenues at Gucci, which account for 87 percent of its sales, were down 7.5 percent in the fourth quarter, while wholesale revenues fell 31 percent. The brand closed nine locations during the period.

Pinault said Gucci suffered from a lack of new merchandise in stores in the last three months of the year, as deliveries of its cruise collection — the largest of the year — were pushed back from early October to late November and early December, in line with its new calendar.

“That impacted the sales and the average selling price also, so that’s why it’s irrelevant to use [the fourth quarter] to go to long-term conclusions on Gucci. That would be so wrong,” he emphasized.

Sales in Western Europe fell 45 percent in the quarter, as local customers failed to compensate for the absence of tourists. Gucci’s revenues in North America rose 13 percent, capping a strong performance for the region, which managed to post flat sales for the full year even as all other areas declined.

Gucci recorded a 20 percent drop in revenues in Japan in the fourth quarter, while Asia Pacific rose 8 percent, boosted by a very strong performance in mainland China and Taiwan, which made up for weakness elsewhere in the region.

Pinault said he expected Chinese tourists to resume traveling in Asia Pacific in the second half, but it would take them longer to venture farther afield. He did not expect the recovery of Chinese travel to dampen domestic sales, and said Kering was comfortable maintaining a 25 percent price premium on products sold in China.

Going forward, Kering plans to focus its wholesale efforts on the brand’s 300 best doors worldwide, reducing the weight of the segment from 13 percent of revenues in 2020 to 10 percent in 2021 and 5 percent by 2022. “By the end of 2021, the relative contribution of wholesale should be less than half pre-pandemic levels,” Pinault said.

In parallel, it is launching e-concessions designed to recoup some of the lost customers. Gucci recently opened two digital flagship stores on Alibaba’s Tmall Luxury Pavilion, including one for beauty, and is in talks with companies such as Net-a-porter, Matchesfashion.com and Mytheresa, according to Pinault.

The focus on righting Gucci’s course could again delay any mergers and acquisitions. Since announcing two years that it was on the hunt for acquisitions, Kering has failed to make a move, despite periodic speculation.

Pinault said that the group was now capable of potentially absorbing bigger targets, having completely revamped its internal logistics, including bringing e-commerce activities back in-house. Balenciaga on Tuesday became the latest brand to complete that process, with Bottega Veneta set to follow in April.

But he underlined that growing its existing brands remained top-of-mind. “We still have a priority on the organic growth of our brands, starting with Gucci, where we are far away from maturity, in my opinion, in terms of potential to grow,” Pinault said.

“We are confident that with this new calendar of initiatives unfolding in 2021 and beyond, Gucci will leverage its full potential and deliver a significant and sustainable growth trajectory,” he concluded.