It will be remembered as one of the most vicious boardroom fights in recent times. 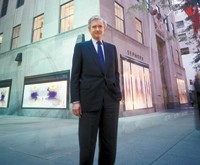 It will be remembered as one of the most vicious boardroom fights in recent times: the pitting of PPR boss François Pinault against LMVH Moët Hennessy Louis Vuitton owner Bernard Arnault for control of Gucci.

The protracted and bitter struggle — full of backstabbing, acrimony and endless litigation — ignited in 1999 when Gucci invited PPR to take a 40 percent stake in the Italian business.

The move stunned the industry and, more important, effectively ended LVMH’s unwanted advances by diluting Arnault’s stake in Gucci from 34 to 20 percent.

In return, PPR injected $3 billion into Gucci, which financed the major acquisitions drive that made Gucci into a multifaceted player in the luxury world, with houses from Boucheron to Yves Saint Laurent. High-level talks between LVMH and PPR over Arnault’s troublesome stake ensued, as neither party felt comfortable being in bed with the other.

In one peace offering, PPR proposed a two-part deal that would have provided Gucci shareholders — including LVMH — with a payout of $100 a share.

But LVMH spurned the offer when it learned Gucci’s board was not ready to recommend the deal because it considered the price to be too low.

By this point, the bad blood was so bitter that neither group could even agree on terms for a divorce.

What was the alternative? Court, of course.

But the drawn-out legal proceedings that ensued in an Amsterdam court, where Gucci was incorporated, were equally acrimonious — and indecisive.

There were myriad claims, including a complaint by LVMH that Gucci’s management practices were fraudulent at the time it was fending off Arnault’s hostile advances. LVMH seemed to be fighting tooth and nail to win back control of Gucci.

But then, in the summer of 2001, after more than two years of litigation, bitterness and backbiting, the war came to a quiet end.

On the eve of the Sept. 11 terrorist attacks, the two adversaries announced a peace pact in a news conference at the Printemps department store in Paris.

“This is the settlement to end the animosity,” said Serge Weinberg, then-chief executive of PPR. “Now we can concentrate on fortifying our multibrand strategy.”

The deal stipulated that PPR pay $94 a share for about 40 percent of LVMH’s 20.6 percent holding in Gucci — amounting to about 8 percent of the stock in the company.

PPR pledged then to make a public tender offer to Gucci shareholders of $101.50 a share in March 2004, effectively giving PPR close to 100 percent control of the firm.