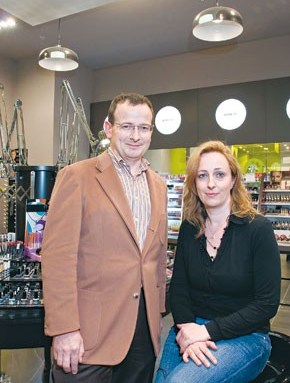 While much of the beauty world’s attention was focused on the recent Cosmoprof trade fair in Bologna, Italy’s main fragrance and cosmetics players were pursuing other agendas. Here is a report from in and around Milan.

Despite the dismal state of the Italian economy, local retailers are attempting to move forward by revamping their stores and upgrading their assortments.

Perhaps the most dramatic example is Upim, a competitively priced department store with 153 doors with perfumeries throughout Italy. It is upgrading its beauty departments with a sleeker design and more polished product offering. One year into the project, 20 stores already have been converted, and by the end of this year, plans call for a further 50 to be overhauled.

“Perfumeries are a chance to build traffic and margin,” said Luca Rossetto, chief executive officer of the chain. “We started with increasing the level of service and reshaping the assortment.”

“In general, Upim is not for young people,” he said, adding that the average customer is 30 to 45 years old with a middle to low income. “The perfumery is attracting teenagers in a fashion we didn’t expect. My thinking is to develop specific responses for them in other areas [of the store].”

The average pricing ranges from 1 euro to “whatever you want it to be,” Rossetto said. Upim’s beauty departments, which carry brands including L’Oréal Paris, Deborah and John Frieda, average in size from 1,076 to 2,690 square feet.

Another dramatic revamp has happened at Coin, a midmarket department store, which opened its new-look Milan flagship in March, complete with an enlarged beauty department moved to the front of the store.

To cater to the more contemporary market, Valerio has concentrated on securing exclusives with brands such as Dianne Brill, a German makeup line; Sabonne, an Israeli body care line based on ingredients sourced in the Dead Sea, and Korres, the Greek natural brand.

The flagship’s annual sales come in at 3.5 million euros, or $4.79 million. Valerio forecasts that number will grow by 70 percent in the next year.

Growth is also a preoccupation of Augusto Mazzolari, founder of the eponymous high-end perfumery chain. His flagship in Milan has grown from a perfumery to a veritable luxury lifestyle emporium encompassing furniture, homewares, niche fragrances, home scents and design objects. In addition, Mazzolari recently closed a deal to add 4,628 square feet, bringing the total space to 21,527 square feet. Mazzolari, a former hairdresser, is considering opening a hair salon in the new space.

As pleased as he was with his retail expansion, he became animated when discussing Milan’s recent selection as the site for the next world innovation exposition.

“It’s the right moment to invest in Milan. The city needs to develop itself,” he said.

Also testing a new concept is LVMH Moët Hennessy Louis Vuitton-owned Sephora, which recently unveiled a separate in-store branded shop-in-shop concept for its private label lines in one of its Italian doors.

“We have to change to be unique,” said Laura Schiatti, director of acquisition and marketing manager for Sephora Italy.

Among strategic steps for Sephora in Italy is to move further into the south of the country. Already the chain has opened a flagship in Palermo, Sicily, which Schiatti said is a good example of the impact Sephora can make visually.

The reality in the equation is based on three concepts — Femme, femininity and the power of women; Zone Living, taking care of our world and ourselves, and Pride, which focuses on glorifying Asian culture. Dreams is driven by three concepts — Sublime, a polysensorial experience; Fantamation, an uberperfect take on beauty, and Ecstasy, meant to deliver a euphoric experience through color cosmetics.

This year’s slogan is “real dreams can happen when you open your eyes and see your reality.”

For the first time Intercos showed new makeup effects that are still in progress, under its “blue sky” banner. Novelties in the works include a fourth-generation polymer, which claims 12- to 16-hour wear for powders and a polymer for use in lipsticks said to deliver luminosity for up to 16 hours. Intercos also is working on a new raw material meant to extend lip gloss’ shine and staying power, as well as a baking technique for powders, which is said to improve texture and finish. A pressing technology in development to make powders more emollient is also in the lab stages.

Intercos is cooking up a sustainable beauty manifesto, as well.

Massarotti delivered a speech at Cosmoprof as part of a program entitled Package Extinction.

Intercos president Dario Ferrari, meanwhile, said the company is expanding capacity on at least two continents. The company now has a 400,000-square-foot plant in China and its facility in Congers, N.Y., will soon double in size to 200,000 square feet. Ferrari said the company now does 53 percent of its sales in the U.S. and its business there gained 30 percent in the first quarter due primarily to an upsurge of sales to mass cosmetics companies.

He also is planning to open an R&D center outside of Shanghai.

“Innovation has always been our strength,” said Ferrari. “Then we tried to be more international and worked on internationalization. Now we’d like to be global so we have operations in the U.S. and China. Now we’re in the best position possible to give the best service to our customers.”

Italian fragrance and cosmetics manufacturers are responding to a sluggish home economy by betting that brand building will pay off.

Product launches to solidify brand positions and marketing efforts to animate sales in-store are among strategies being employed to maintain and boost market share at home and overseas.

Among movers in the market are:

Deborah Milano: The Milanese color cosmetics brand is restaging Debby, a makeup line aimed at 18- to 25-year-olds, a target the brand has identified as a fervently spending demographic buffered from economic trends. The line has been repackaged with a black and fuchsia color scheme.

For the parent brand, Deborah Milano, the group created a more sophisticated display unit, which will be rolled out, beginning in June. The move follows three strong years for the brand when export sales tripled, according to Malcolm Kemp, the brand’s export manager. Referring to the present 40-country distribution, Kemp remarked, “We are now an important nonmajor [competitor].”

Diego Dalla Palma: With Antonella Cal­caterra recently named export manager, the makeup artist brand’s priority is to beef up its international business. Plans are afoot to penetrate markets including the Middle East and Europe. Exports currently represent only 10 percent of the brand’s sales, leaving plenty of room for growth, according to Calcaterra, who claims the brand’s positioning and design has international appeal.

EuroItalia: Giovanni Sgarboldi, president of EuroItalia, one of the Italian industry’s major players, said the focus for 2008 is its Versace fragrance license, in particular the launch of Versace Uomo, a male follow-up to a signature female scent introduced last year.

“We’re really proud of the new men’s fragrance,” he said. “We want to build the Versace brand.”

Also set to roll out from May is Hippie Fizz, the fourth fragrance in the Moschino Cheap & Chic franchise.

ITF: A Dsquared women’s fragrance, dubbed She Wood, is in the works at ITF, the Italian fashion brand’s license holder. Roberto Martone, the company’s president, said Dsquared’s initial fragrance effort, a men’s scent called He Wood, has sold above expectations since its 2007 launch.

ITF recently inked a deal to distribute fragrances for Custo Barcelona, the Spanish contemporary brand, in Italy, Germany, Austria and Greece. The brand’s debut scent will be launched in September. Also on the drawing board is the first fragrance for Italian brand Blumarine, which is slated for fall 2009.

Collistar: Opening in Taiwan, Hungary and markets in South America is a key strategy for makeup and treatment brand Collistar. The firm also aims to bolster its position in its current distribution network. Among initiatives is the opening of a treatment room and retail area in a Douglas flagship in Frankfurt. The perfumery, which is Collistar’s first retail outlet in Germany, is meant to springboard the brand’s presence in the country this year.

“What we want to do is consolidate our international presence where we currently are and grow with the opening of new markets,” said Paolo Bevigne, export director at Collistar.