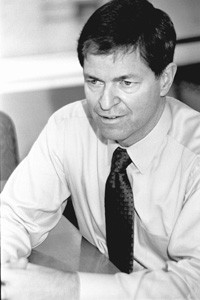 Zalando Revenues Up 34 Percent, Even as European Lockdowns Ease

The switch marks the exit of Questrom, one of the giants in retailing, from the industry. “I will be departing from retail,” Questrom, 64, said Wednesday when the change was announced. “I am going to retire, though my wife says, ‘You are always retiring.’ But I don’t plan to go [back] to work.”

Questrom’s exit opens the way for one of retailing’s more seasoned executives, with Ullman having held top jobs at Macy’s, LVMH Moët Hennessy Louis Vuitton and the DFS Group primarily through the Nineties.

Penney’s, said Ullman, “has been through a remarkable turnaround. My challenge will be to get up to speed, and define the next level for Penney’s. I see that as exciting. There is still a lot of evolution to occur.”

But Ullman’s appointment leaves some doubt over the future of Vanessa Castagna, chairman and ceo of Penney’s stores, catalogue and Internet, and considered the retailer’s chief merchant. It’s possible that Castagna, who also holds the title of executive vice president of Penney’s, will decide to leave the company, having been passed up for the top slot. She also has an escape clause in her contract, permitting her to leave without the usual noncompete restrictions that most retailers impose, according to a Penney’s executive.

That would leave Penney’s in a hole. Castagna is credited as being a strong second in command, having effectively implemented critical strategies, including centralizing the buying, and store layout and merchandise presentation changes, as well as more aggressive advertising and price promoting that were instigated by Questrom.

“There’s no decision on Vanessa,” Questrom said, though he added that she was disappointed at not being the final candidate. Questrom said in May he would not renew his contract and at that time said he’d recommend that Castagna succeed him.

Since Questrom assumed the chairmanship and ceo posts at Penney’s in September 2000, the skilled turnaround specialist has orchestrated a complete revamping of the retailer, from selling its floundering Eckerd drugstore business to strengthening cash flow, reducing debt and restoring a fashion image. Wall Street hailed the Eckerd sale as a plus, because it enabled Penney’s to reposition its capital structure, which included share repurchases of up to $3 billion, and billions more in debt reductions.

Shares of Penney’s have tripled since Questrom took over its leadership. The stock, trading on the New York Stock Exchange, closed at $12.43 on Sept. 15, Questrom’s first day on the job. Wednesday’s close was $37.36, down slightly from a high of $41.50 on Aug. 2.

In the second quarter ended July 31, Penney’s, free of its Eckerd chain, posted net income of $1 million, on a 5.8 percent sales increase to $3.86 billion. That included a 7.1 percent gain in comparable-store sales and a 1.6 percent decline in Internet and catalogue sales.

For the six months, income fell 31.1 percent to $42 million, and sales rose 7.3 percent to $7.89 billion. The results included the Eckerd operation, which was sold for $4.5 billion to CVS Corp. and the Jean Coutu Group.

Ironically, Ullman and Questrom once locked horns in a bitter takeover battle in the early Nineties. Ullman was running a bankrupt R.H. Macy and was struggling to keep it independent from Federated, at the time being run by Questrom. Macy’s capitulated in 1994, Questrom emerged victorious, and Ullman went on to become ceo at DFS Group and a top executive at LVMH.

Wednesday’s announcement that Ullman will run Penney’s, which operates more than 1,000 department stores, seemed surprising considering that, for the past two years, he has been retired from active corporate life. However, he has been serving on some corporate and nonprofit boards, including Polo Ralph Lauren Corp., Starbucks Coffee Co., Taubman Centers and Segway LLC, and has been doing some consulting.

Ullman left LVMH in 2001 citing a medical condition. On Wednesday, he dispelled some mystery about his health and neurological problems, which in the past have made traveling and long work hours hard to sustain. He said he has a spinal chord injury that was microscopic and tough to detect until recently, and that he does have some motor issues. Walking long distances are difficult, he said, but he uses a Segway and said that his doctor has given him the green light to work. “There is no medical reason why I can’t perform the job,” he said.

Questrom’s five-year contract was set to expire September 2005, but he said that it made sense to accelerate his departure once his successor was found. “It’s more important that the company go forward with the next candidate.”

Questrom said he would split his time living in Aspen, Colo., and Dallas, where Penney’s is based. He loves to travel, ski, bicycle and keeps a busy social calendar. “This is not bittersweet,” he said. “There’s sadness only in that I enjoyed working with the J.C. Penney people. I believe the company can go on to new heights. We’ve gotten so much accomplished.”

Questrom, prior to running Penney’s, was chairman of Barneys New York and, before that, headed Federated and Neiman Marcus. While both Ullman and Questrom are considered visionary and very smart, their skill sets are different, Questrom being more the meticulously dressed, suave merchant prince, Ullman, a driven, hard-working and largely financial and operations executive, adept at streamlinings, exuding a cool, confident demeanor and an analytical mind.

Still, at various jobs, he has been to some degree involved in merchandising and marketing, which he once called “the fun sides of retailing.” He also has experience in the mergers and acquisitions arena at Macy’s and LVMH, which could be useful if Penney’s one day decides to pursue an acquisitions strategy.

“Mike Ullman can lead [Penney’s] to a new level now that it has achieved its merchandising savvy,” observed Walter Loeb, the retail analyst. “It’s an interesting choice. Mike has always had a vision in everything he has done. It’s now really about getting more young people to shop the store. Penney’s has got to be more competitive in this environment.”

Ullman began his career as an international account manager at IBM, where he was responsible for consumer and retail clients. He later was vice president for business affairs at the University of Cincinnati, his alma mater, and in 1981, became a White House Fellow, serving as executive assistant to the U.S. trade representative.

From 1982 to 1986, he was executive vice president at what was then Federated’s Sanger Harris division. It’s since been consolidated into May Department Stores’ Foley’s division. From 1986 to 1988, he was managing director of Wharf Holdings, a diversified holding company in Hong Kong, where he was discovered by Edward Finkelstein, the legendary former Macy’s chairman. Finkelstein brought him on board in November 1988 as executive vice president to shore up Macy’s balance sheet. After a couple of promotions, he became co-chairman and co-ceo in April 1992, deposing Finkelstein just two and a half months after the company went bankrupt. At Macy’s, Ullman took a merchandising-centric company into the computer age by installing new technologies to track and reorder goods. He tackled shortage and operational problems, cut debt and slashed the staff from 70,000 to 50,000. He also is credited with implementing the store’s buyer-planner system and keeping cash flow positive for a good stretch, though sales were difficult and debt was high, leading to the 1992 bankruptcy filing.

Macy’s stayed in bankruptcy for 35 months until getting swallowed by Federated, at which point Ullman split in 1995 to become chairman and ceo of the DFS Group chain of duty-free and retail shops around the world. About a year later, LVMH bought DFS and Ullman steadily rose up the ranks of the French luxury goods company, becoming head of the “selecting retailing” division, which included Sephora and DFS, and later becoming number two in command at LVMH, next to Bernard Arnault. When LVMH looked at the books for Barneys New York last year, Ullman was in on the talks about a possible acquisition, but no deal was reached.