Despite $13.5 million loss in the fourth quarter, J. Crew still has cautious expansion in mind.

By Sharon Edelson and Alexandra Steigrad on March 10, 2009
View Slideshow 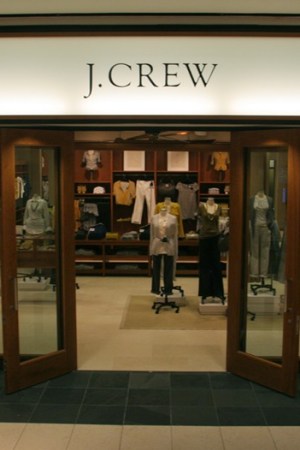 NEW YORK — Tightfisted consumers and rising costs may have pushed J. Crew Group Inc. to a $13.5 million loss in the fourth quarter, but the retailer still has cautious expansion in mind.

J. Crew posted a net loss of 22 cents a diluted share for the period ended Jan. 31, compared with net income of $25 million, or 39 cents, in the same year-ago quarter. Revenues declined 3 percent to $388 million from $399.9 million a year earlier and comp-store sales fell 13 percent. Retail sales slid 3.3 percent to $252 million, while direct sales were down 2.4 percent, to $123 million. Gross margins fell to 27.6 percent of sales from 41.3 percent due to increased markdowns and greater promotional activity during the quarter.

But while the company is proceeding with store openings slowly, it’s by no means sitting on the sidelines. In an interview after the conference call, Millard “Mickey” Drexler, chairman and chief executive officer, said the retailer is opening stores in select small affluent cities tailored to individual locations. J. Crew is also working to develop a separate identity for its men’s business. The company opened men’s-only stores in TriBeCa here and Westfield Garden State Plaza in Paramus, N.J., and is contemplating more. Drexler also has his eye on the bridal business; the firm already offers gowns, bridesmaids and flower girl dresses in its catalogue and online.

“A bridal salon store is something we’re talking about,” he said. “We have such strong demand and to reinforce that with a store in Manhattan would be great. We’re looking uptown and downtown. If the right location came up, we’d do it.”

While Drexler said he was “disappointed by the fourth-quarter operating results,” they beat the expectations of analysts polled by Thomson Reuters, who predicted an average loss of 27 cents a share on revenues of $372.8 million, which sent J. Crew shares up nearly 13 percent in after-hours trading. The stock closed Tuesday at $9.72, up 36 cents, or 3.9 percent, on the New York Stock Exchange.

J. Crew did not provide guidance for the full year, but said it expects first-quarter earnings per share in the range of 7 to 12 cents, excluding severance and other items. The retailer announced plans for layoffs and other cost-cutting measures on Feb. 26.

Drexler said while the economic environment severely affected J. Crew’s results, “there are things we could have done better. We’re micromanaging every aspect of the business with the recent announcement of a cost-reduction program. We’re focused on maintaining a healthy balance sheet.”

Inventory management is another initiative. “We began 2009 with less inventory than last year,” Drexler said. “We will have our inventory growth aligned with the trend of the business by the end of the second quarter.”

J. Crew’s assortments are being skewed so there is more merchandise below $100 than before. “We’re responding to customer preference,” Drexler said. “That’s where they’re moving. Our bestsellers are things that are in fact stylish and fashionable and under 80 or 90 bucks. That’s where the action is right now. The knit, woven shirt and accessories businesses are doing well.”

Drexler may have said that “there is a sea change to the business, the customer is hesitant to spend and shopping differently,” but he’s not about to serve up bland merchandise. “The last thing we’d want to own is basics that look like other people’s goods,” he said. “We’ll never be the lowest-priced retailer around. We have not moved off our long-term objective, except that we’re skewing inventory at much more friendly prices and lower opening price points. We’re maintaining our initial margins.”

Collection, higher-priced unique designs produced in limited quantities, is a business J. Crew had been developing prior to the recession. “It’s very viable now,” Drexler insisted. “It has its place in the mix.” The first Collection store opened in October on Madison Avenue. “The store has been incredibly successful,” he said. “Not the least reason is that it’s on Madison Avenue, surrounded by designer shops that are more expensive. We’re incredibly pleased with that business. It’s beyond where we thought it would be.”

While Drexler said he won’t open an identical Collection store anywhere else, “we’d open its variation on a theme. Next month we’re opening a unit in Malibu, Calif. that will reflect more designer [product] but be tailored for Southern California. A shop dubbed J. Crew at the Mountain bowed in Aspen and J. Crew at the Beach in East Hampton is being expanded. These stores are designed to fit in with their communities. A Crewcuts is opening in New Canaan [Conn.] shortly.”

J. Crew plans to open 25 stores in 2009, versus 40 in 2008. Eight of those stores will be Madewell units, J. Crew Group’s lower-priced casual concept. “Madewell is in tune with the times,” Drexler said. “It’s fashion-y, casual, great quality and really well priced. But we’re being cautious. Now’s not the time to get too enthusiastic.”