Japanese denim makers continue to face tough market conditions at home and abroad, but they are hoping their high-quality cottons and indigo dyes will... 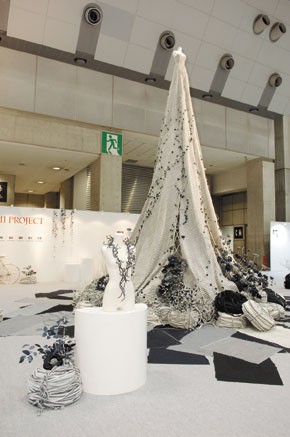 TOKYO — Japanese denim makers continue to face tough market conditions at home and abroad, but they are hoping their high-quality cottons and indigo dyes will convince women to splurge on new jeans.

The country’s denim mills, including Kaihara and Kurabo, are doing their best in challenging times to win over consumers, who are either cash-strapped or jaded with the brands and styles on offer. In 2006, the latest figures available, Japan’s denim exports dropped 3.3 percent to 56.5 million square meter equivalents, according to the Ministry of Finance. The industry saw a peak in 2004, exporting 60.8 million SME.

Much of the Japanese denim industry is concentrated in the area around Hiroshima, a region that primarily serves the domestic market but has an international profile as well. Last year, denim exports from the area dropped slightly to about 628 million yen, or $5.4 million at average rates for the period, from 630 million yen, or $5.42 million, in 2006, according to a local trade organization.

“The premium zone, which is about 3 to 5 percent of the world market, has grown so much over the last three to five years,” said Mamoru Kaihara, director of sales and marketing at Hiroshima-based mill Kaihara, which posts sales of about $180 million a year. “But over the last six months, due to things like the subprime crisis in the U.S., people don’t want to spend so much money on jeans.”

“Consumers [already] have many jeans stocked in their wardrobes. The factories are oversupplied,” he said. “But it is good for us because we are developing new items and the customer wants something new.”

It’s hard enough to woo the consumer in a difficult macroeconomic climate, but it’s even trickier when jeans makers aren’t innovating enough on the style front, Kaihara said.

“Everybody looks the same, there’s nothing particularly different,” said Kawano, noting jeans makers have overexploited the skinny trend of recent years without coming up with a new design story to drive the market. The wide-leg styles gaining momentum elsewhere will be a challenge for Japanese customers, who tend to be shorter than Westerners, he said.

Meanwhile, the battle for market share is intensifying and manufacturers are stepping up their game in the areas of high-tech innovations and better quality materials. Kurabo’s latest innovations include a denim fabric featuring Dow Chemical’s stretch fiber XLA. It is also pushing a “cube-spinning” technology that keeps the denim fabric exceptionally flat. Rival Kaihara is focusing on super pima cotton and new dye variations.

Kaihara is also playing a supporting role in Uniqlo’s continuing success with affordable jeans. The retailer, which sells about 10 million pairs of jeans a year, buys most of its fabric from Japanese mills, including Kaihara, and manufactures its garments in China, according to a Uniqlo spokeswoman. That cost savings allows Uniqlo to charge as little as 2,990 yen, or about $28.75, to 4,990 yen, or $47.99, for a pair of jeans — a bargain compared with the niche premium brands of years past.

“The gap between the higher price to lower price is much wider than it was 10 or 20 years ago,” Kaihara said.