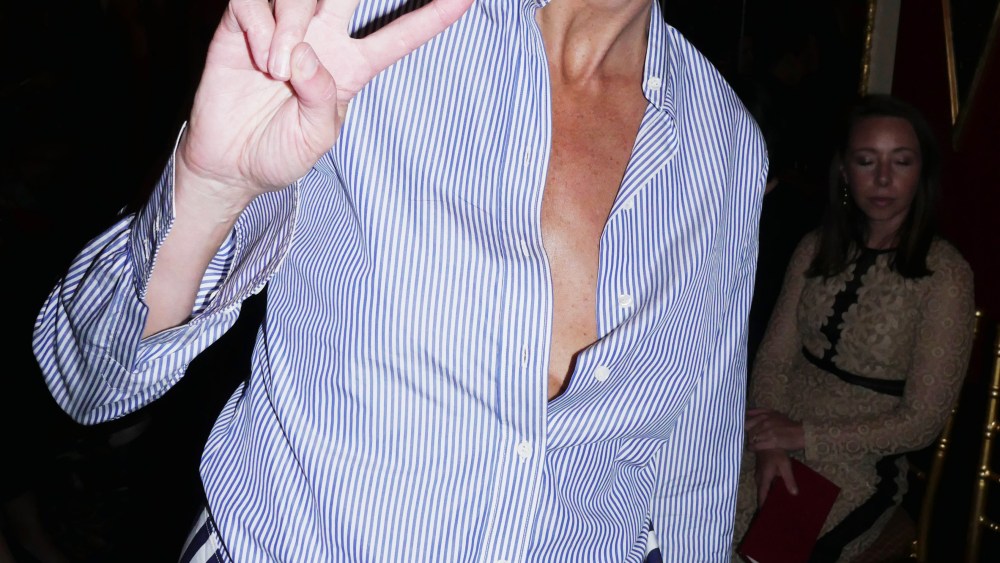 The Jenna Lyons days are over at J. Crew Group Inc.

Lyons, known for her quirky style, thick glasses and self promotion, is leaving the company as president and creative director.

A force behind the brand, she was criticized for taking on too high a profile as a tsunami of change has hit retail hard. J. Crew has been hit even harder than some, struggling through merchandise missteps as it manages a heavy debt load following the 2011 deal to be taken private by TPG and Leonard Green for $3 billion.

Lyons, who has been responsible for all product design, visual and brand presentation, will remain as a creative adviser at the company through this year as her contract runs out. She was the highest-paid named executive at the company last year, according to the latest annual report, which had her earning $1.4 million (she nudged past president, chief operating and financial officer Michael Nicholson by $600). Under the terms of Lyons’ 2010 contract, she is subject to non-competition and non-solicitation covenants for a year after she leaves the company. Last year, she exchanged a series of options for just over 3 million vesting stock options with an exercise price of 10 cents.

She has worked at J. Crew for 26 years and has been president and creative director since 2010. The role will not be filled.

Now the future of the company’s design rests on Somsack Sikhounmuong, head of women’s design, who is being promoted to chief design officer, overseeing the women’s, men’s and Crewcuts design teams. He will report to chairman and chief executive officer Millard “Mickey” Drexler and the rest of Lyons’ responsibilities will be absorbed by J. Crew’s experienced team.

The executive switch-up puts Drexler more immediately in control of J. Crew’s turnaround as he will oversee creative aspects of the business such as marketing. But he said the move hasn’t ratcheted up the pressure on him personally.

“Retail is changing at the speed of light right now and we’re excited to move forward and meet the challenges we’re faced with,” he added. “The company will continue to evolve. This is a mutual decision; she had a really good run and we had a great partnership.”

“This is a major blow to the J. Crew brand, as it has been linked to Jenna Lyons and her personal style — not just internally, but to consumers — ever since she took the creative helm in 2008,” said

Gesina Gudehus-Wittern, engagement manager at strategic consulting firm Vivaldi. “This close association of Lyons’ personal style and personality in the customers’ eyes is a lot more common for luxury brands and quite unique for a mass market retailer, but has been one of the most successful elements of the J. Crew brand that others have tried to replicate without success.”

She said Lyons “has been to J. Crew what Karl Lagerfeld is to Chanel — not the brand’s founder, but the personification of everything the brand stands for in the mind of its loyal customers. It’s hard for a loyal J. Crew customer to imagine the brand without her — and dangerously, for those loyal to the brand, that loyalty is closely tied to Lyons.”

But given the company’s finances, others were watching Lyons and anticipating some kind of move.

Elaine Hughes, ceo of executive search firm E.A. Hughes & Co., said: “Given the challenges facing the J. Crew business, Jenna Lyons’ departure is no surprise. As the creative vision for the business, she is responsible for product. The product is not resonating with the customer so there needs to be a change. Jenna has been featured as the face of the brand and has been highlighted in Fast Company magazine, the publication which reports on the technical acceleration existing globally….Jenna’s exit only reinforces the fragile state of the fashion business in this time of digital onslaught.”

J. Crew isn’t so much being reinvented in the face of those and other changes as it is being refocused on what works and revamped to keep up with the evolving market, for instance by relying more on data.

Drexler said in a statement that: “Somsack and our design teams have a deep understanding of the aesthetic and style our customers rely on J. Crew to deliver, with a proven track record of driving creative vision in-line with our brand DNA. We are excited to extend Somsack’s vision across all design categories and look forward to the team’s contributions. As always, delivering the very best product, value and brand experience across channels is our top priority. We look forward to this next chapter and thank Jenna for her continued dedication to our team and passion for our brand.”

Celebrity branding expert Jeetendr Sehdev, in his recent book, “The Kim Kardashian Principle: Why Shameless Sells (and How to Do It Right),” dissected Lyon’s experience at J. Crew. Sehdev, who sings the virtue of self-promotion, said Lyons hit it just right for a time.

“Lyons was narcissistic in exactly the right amount and in precisely the right way,” Sehdev wrote, noting her high profile and the way she styled models with thick black glasses and long, straight hair to look like her. “She designed clothes that she wanted to wear and did it with such courage, conviction and finesse that millions of women and men worldwide bought into her vision.”

But as the business faltered, Lyons’ persona receded from public view.

However, times have changed, drastically, and the retailer is in the midst of some serious changes across its business as it adjusts.

J. Crew said it “has been strengthening its operations to be able to move more quickly to address today’s fast-changing world, focusing on sales productivity with new merchandising and marketing initiatives, which are expected to enhance customer loyalty and extend brand reach.”

With Lyons transitioning out, Drexler, who is heralded for his work turning Gap into a Nineties juggernaut, has both hands on the wheel at J. Crew.

But it’s a tricky road ahead.

J. Crew has $1.5 billion in debt and is fighting with creditors, some of whom object to its move late last year that put nearly three-quarters of the J. Crew trademark in a separate subsidiary.

Which Retailers Are Closing Stores in 2017